Once a darling of the stock market, electric vehicle (EV) stocks have recently come under significant pressure. In addition to worries about higher-than-anticipated inflation levels and subsequent interest rate hikes, investors are also concerned about rising commodity costs in the face of the ongoing Russia-Ukraine war.

With Russia as the major supplier of nickel, a critical ingredient in EV batteries, prices of this key raw material have been surging at a breakneck speed. Several EV players focused on premium models (which use nickel-heavy, lithium-ion batteries) will either be forced to raise prices or reduce margins. However, a leading China-based new energy vehicle (NEV) player BYD ( BYDDY 5.36% ) ( BYDD.F 5.47% ) may be less affected. 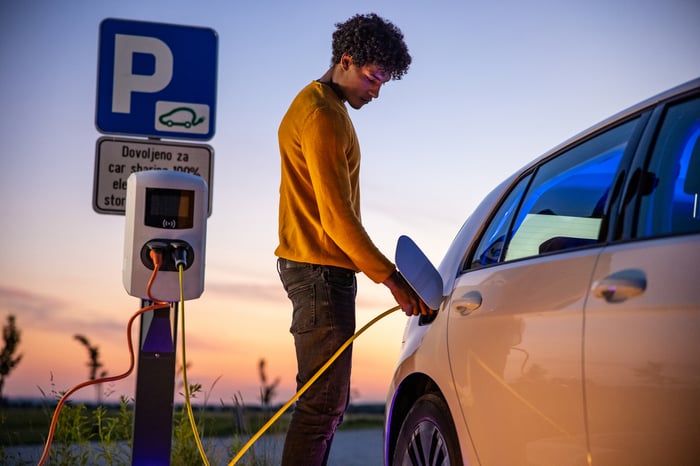 BYD is a global manufacturer of lithium iron phosphate (LFP) batteries. (For these batteries, iron phosphate is used instead of nickel.) The company’s vertically integrated business model can be a solid plus in these uncertain times. At the same time, the company may also witness rising demand for its LFP batteries from other EV players.

On the other hand, EV automaker Rivian Automotive ( RIVN 8.24% ) is struggling with supply chain challenges for some of its car parts, exacerbated by semiconductor shortages. Investor backlash also forced the company to reverse its recent 20% price hike for bookings made prior to March 1.

Against this backdrop, BYD may be one EV stock worth considering, while Rivian might be one worth avoiding at least for now. Here are a few more reasons that support this position.

BYD is one of the four significant non-U.S. holdings of Berkshire Hathaway. The asset management company held a 7.7% stake in this EV player at the end of 2021. The company manufactures electric vehicles (passenger and commercial) and plug-in hybrids and is rapidly expanding its battery-manufacturing business. The company also has a solid presence in the electronics-manufacturing business, which includes smartphones, notebooks, PCs, and medical devices.

BYD’s Qin, Han, and Song models ranked second, fifth, and sixth, respectively, among the top-15 best-selling new energy passenger cars in China in 2021. In 2021, Qin’s sales volume reached 187,227 units, which was higher than that achieved by any Tesla ( TSLA 3.88% ) model. This is testimony to the strength of BYD in its home market.

Additionally, BYD has focused on exporting its NEV models to international markets such as Norway, India, Australia, Japan, and Latin America. The company also manufactures electric buses at its Lancaster, California, manufacturing plant for distribution in the U.S. market.

BYD’s strategy of targeting the general population with its lower-priced NEV models has proven to be quite successful. 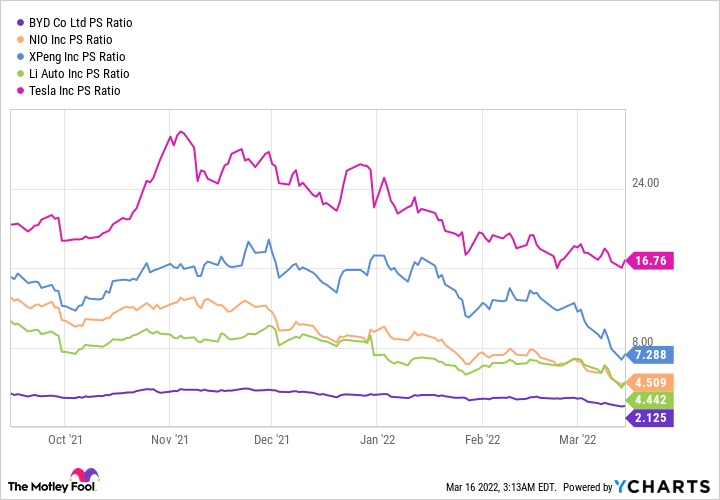 The company trades at a significantly lower price-to-sales (P/S) ratio as compared to prominent electric vehicle players. Against the backdrop of a strong and diversified business model and relatively low valuation, the stock seems well poised to rise higher in the coming months.

After a long downward spell, the share prices of Rivian have been gaining momentum since March 14. Investor sentiment seems to have taken a turn for the better after the company announced the hiring of a new chief operations officer, automotive veteran Frank Klein, to help it ramp up the pace of vehicle production. Rivian’s stock is also benefiting from the potentially improving regulatory landscape, as the Chinese government is now showing readiness to cooperate with U.S. regulators to avoid delisting of U.S.-listed Chinese stocks.

But none of this positive news indicates much change in Rivian’s underlying business fundamentals. Supply chain constraints continue to be the biggest challenge for the company. Suppliers of a few parts have failed to ramp up production lines at the pace needed to fulfill Rivian’s manufacturing demand. The ongoing supply-demand imbalance in the semiconductor industry has become a major headwind for Rivian.

Semiconductor suppliers are currently allocating chips and components to clients based on the demand recorded in 2021. With Rivian starting production only in late 2021, the company is finding it difficult to instill confidence among these suppliers about its future execution capacity. Facing these challenges, Rivian has produced only 2,425 vehicles since the start of production. The company has also guided for production of only 25,000 vehicles in 2022, far lower than its manufacturing capacity of 50,000 vehicles in the face of persistent supply shortages.

In the fourth quarter (ending Dec. 31, 2021), Rivian reported revenue of $54 million, lower than the consensus revenue estimate of $60 million. The company’s loss per share of $2.43 also exceeded analysts’ loss expectations of $1.97 per share. The company has guided for $4.75 billion adjusted earnings before interest, taxes, depreciation, and amortization (EBITDA) loss and $2.6 billion in capital expenditures (CapEx) in 2022. These numbers seem concerning, especially given Rivian’s elevated execution risk.

With high volatility in the overall EV industry coupled with Rivian’s company-specific challenges, this stock may witness some downward pressure in the coming months.

This article represents the opinion of the writer, who may disagree with the “official” recommendation position of a Motley Fool premium advisory service. We’re motley! Questioning an investing thesis – even one of our own – helps us all think critically about investing and make decisions that help us become smarter, happier, and richer. 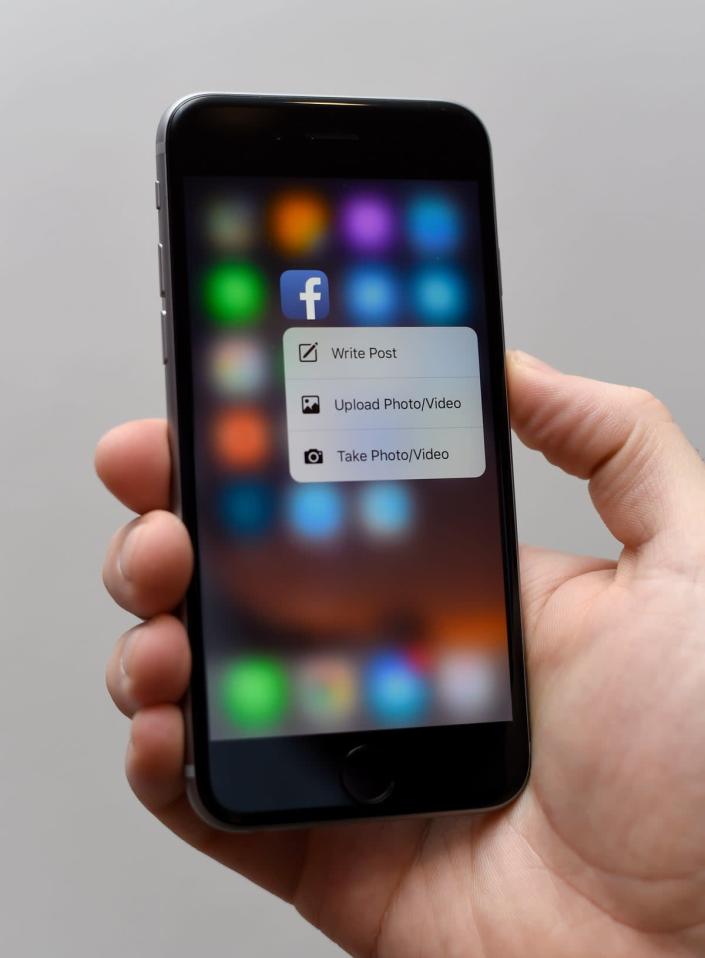