UNIVERSITY PARK – Louisiana Tech football coach Skip Holtz and SMU head coach Sonny Dykes have a lot in common. Both are the sons of former college coaches, and when Holtz was considering taking the job after Dykes at Louisiana Tech, he called Dykes and asked for his advice.

“Really, he told me I’d be crazy if I didn’t want to come in here and have the opportunity to be the head football coach at Louisiana Tech,” Holtz recalled to reporters this week.

There’s familiarity between the two coaches, which makes Holtz’s comments about 2-0 SMU intriguing.

“I think Sonny has done a great job building that program … and I think right now he’s got his best team since he’s been there,” Holtz said.

If SMU can deliver on that, and a 3-0 start for the third-straight season, is something we’ll have to watch this Saturday at 2:30 p.m. in Ruston, Louisiana. Here are five other things to watch:

Aside from a little heat, SMU has had great weather the first two weeks of the season at Ford Stadium. That’s not expected to be the case against Louisiana Tech.

That last part may have been an exaggeration, but the one thing that could prevent SMU from playing on time is thunderstorms, and there are chances of that happening in Ruston from 1 p.m. through 1 a.m. on Saturday, according to the National Weather Service. There’s also an 80% chance of rain.

There’s a couple reasons for that. SMU has a lot of talent and depth at wide receiver and tight end and new starting quarterback Tanner Mordecai has really spread the ball out.

Also, Roberson – who has eight catches for 100 yards – is coming off a season-ending knee injury from last season. He was on a “pitch count” in fall camp, and with so much depth and a long season ahead, it makes sense for SMU to ease him back in.

“I don’t make too much out of it yet, but it’s a trend we’ve got to get fixed,” Dykes said. “We’ve got to start getting him the ball and letting him do what he can do down the field.”

A push for pass rush

Through two games SMU’s defense has allowed a combined 21 points. The 12 points surrendered to North Texas was the lowest a SMU defense has had against a FBS team in the Sonny Dykes era. That’s been done, however, with a limited pass rush.

SMU has four sacks so far, two of which have come from outside linebacker Gary Wiley.

“If you don’t have a pass rush, you’re going to have problems,” Dykes said. “We’ve got to continue to generate that.”

Ideally, that pressure comes from three-to-four rushers, but SMU defensive coordinator Jim Leavitt said the team can rush up to seven players if needed. We’ll see if that need happens Saturday.

On Monday, during his weekly show at Ozona Grill, Dykes said they’ll probably “shuffle” and “experiment” on the offensive line this week. There were no changes on the team’s publicly released depth chart, but could we see some changes against Louisiana Tech?

It’s possible, even though SMU hasn’t surrendered a sack so far.

“We’ve got to play together better than we have and in sync,” Dykes said. “We’ve got make sure our bad plays aren’t that bad, and right now the bad ones are sticking out.

“We have a high standard for these guys and I want them to play at a very high level, and I think they’re capable of doing that.”

Tanner Mordecai and Austin Kendall were in the same quarterback room at Oklahoma. On Saturday, they’ll face off as opposing starters.

Kendall, a former starter at West Virginia, nearly helped lead Louisiana Tech to an upset win over Mississippi State in Week 1, and helped Louisiana Tech avoid an upset of their own in a Week 2 win over Southeastern Louisiana. Through two games he’s thrown for 486 yards, three touchdowns and two interceptions.

Both Dykes and Leavitt were very complimentary of the former four-star recruit.

“When you put the film on you see a good player,” Dykes said, dating back to Kendall’s time at West Virginia. “You see a tough guy who goes out there and who’s talented, but what I like most about him is he’s got some grit to him … he’s going to find a way to get things done, move the team and be successful. At the end of the day that’s really a quarterback’s job.” 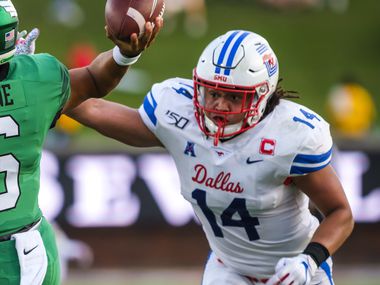