There’s a lot more optimism surrounding Texas Tech football after its 54-21 victory over Florida International in Week 3. But as Big 12 play kicks off this week against Texas, the challenge is only beginning. Here are five things every Texas Tech fan needs to know about the Longhorns.

When I gave my prediction for this game before the season began, I noted that the Longhorns could be on shaky ground as they adjust to a new system. Three games into the 2021 season, that’s proven to be more true than I could have imagined. Texas looked strong in a 20-point win over a good Lousiana team to start the season, but their 40-21 loss to Arkansas the next week shook the college football world. Things looked much better in their 58-0 floor-mopping of Rice last weekend, but that instability still lurks. If Texas Tech can throw some different looks at Texas to keep it off-balance, the Red Raiders will be in the game until the final whistle.

The biggest question facing the Longhorns is their search for a quarterback. Texas named Hudson Card as its starter heading into the season and he had a strong performance against Louisiana to open the year. Card threw for 224 yards and two touchdowns on a 66.7% completion percentage. But after Card threw for just 61 yards and completed eight passes in a blowout loss to Arkansas, it became clear that change was necessary. In the Longhorns’ last non-conference game against Rice, Junior Casey Thompson got the nod. Thompson went 15-of-18 on passing attempts, good for 164 yards, two touchdowns, and an interception. Against the Red Raiders, Thompson will start once again. Perhaps it’s possible that the Longhorns even may try a two-quarterback approach on Saturday.

Bijan Robinson looks like one of the most talented players in college football early into this season. Robinson was dominant on opening week, totaling 176 scrimmage yards and scoring two touchdowns. He happened to suffer a scary-looking injury in the third quarter of that game but even though he returned on the next drive, it could explain the much more modest 3.6 yards per carry he averaged against Arkansas the next week. He did look much improved in Week 3 against lesser competition, picking up 127 yards and three touchdowns on the ground. The Texas Tech defense has looked impressive against the run early, but this will certainly be its greatest test yet.

Texas Tech’s defensive improvement can be largely credited to the talent it has acquired from the transfer portal, but the Red Raiders are not the only ones benefitting. Ovie Oghoufo played a quiet 20 games at Norte Dame before coming to Austin, but he’s been anything but quiet since arriving. In just three games as a Longhorn, he’s already got 2.0 sacks, 3.0 tackles for loss and 13 total tackles. Ray Thronton, a transfer from LSU, has seven early tackles, 1.5 tackles for loss and a sack. This defense is still trying to find its groove and is allowing 5.8 yards per play early into the season (third-most in the Big 12), but these veterans could help correct that.

As Erik Ezukanma is quickly solidifying himself as one of the nation’s best receivers, Texas has a pair of targets that have looked impressive early. The speedy Xavier Worthy leads the team in receiving yards early, with most of them coming in his 88-yard performance against Rice last week. Worthy is also second in the Big 12 in punt return yards, something the Red Raiders’ subpar special teams unit will need to note. Jordan Whittington broke out against Lousiana, grabbing seven catches for 113 yards and a touchdown. He’s added only 6 catches for 39 yards in the two games since, but the talent is still there. The Texas Tech secondary has looked consistent early, but it faces a true test on Saturday. 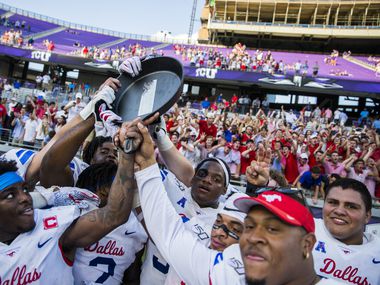