When: 11:00 a.m. on Saturday at DKR-Texas Memorial Stadium in Austin

There’s a tremendous amount at stake in this matchup for a Week 4 contest. This game doesn’t have playoff or bowl implications, but the bragging rights that are on the line are tremendous. This game always has a rivalry feel to it, but things have only intensified since men’s basketball coach Chris Beard’s departure to his alma mater. Texas has suffered one of the most notable losses of the young 2021 season, while Texas Tech comes to Austin undefeated. There’s momentum coming from Lubbock, and a necessity for the Longhorns to increase their own.

When Texas Tech has the football

Texas Tech wants to run in this game, and they’ll need to run in this game. The Red Raiders are running the ball with ease so far this season, averaging 5.5 yards per carry. They’ve run the ball well even without their top rusher from the previous two seasons. SaRodorick Thompson is still recovering from shoulder surgery and has only run the ball four times this season. But in his absence, Tahj Brooks has emerged as one of the best rushers in the conference.

Brooks is averaging 8.1 yards per carry, the most in the Big 12 among players who have ran the ball more than 15 times. Xavier White is also averaging an impressive 7.1 yards per carry. Running the ball will be vital to buy Tyler Shough more time in the pocket, keep the Texas defense off-balance, and wear down the athletic Longhorn defensive front.

Shough is coming off one of the best games of his career against Florida International. The quarterback threw for 399 yards, four touchdowns, and did so on a 74.3 percent completion rate. What was more impressive than the numbers was the accuracy on his deep ball.

The Texas secondary has forced just one interception so far this season. The Longhorns are also allowing the highest opponent completion percentage in the Big 12 so far this season. With Shough looking accurate through three games, this is something Texas Tech could look to exploit. Against the Panthers, Shough completed a pass to 11 different receivers. If Texas Tech can spread the ball like that and run it well down field, they’ll be a tough offense to stop.

When Texas has the football

There’s probably more questions than answers on this Longhorns offense right now, but one undeniable point of confidence can be found in Bijan Robinson. Entering the season with Heisman buzz, Robinson has put together two impressive performances already. The running back has totaled 299 yards on the ground and five rushing touchdowns, all while averaging 5.8 yards per carry. He’s also proven himself as a threat in the passing game, adding 91 receiving yards and a touchdown to his line.

The Texas Tech defense has been great against the run so far this season. The Red Raiders are allowing just 1.7 yards per carry and 54.3 opponent rushing yards per game, both good for second best in the conference. There’s even more reason for optimism after they held the talented D’Vonte Price of FIU to only 51 yards. But going against a talent like Robinson will surely be unlike any challenge they’ve faced yet.

Texas is facing an interesting dilemma at quarterback. Hudson Card is explosive and strong, but he’s young and it shows in his decision making. After a stellar 224 yard, two touchdown performance against Louisiana to start the year, Card only threw for 61 yards in a blowout loss to Arkansas. Casey Thompson — who will start against Texas Tech — has speed and confidence. When he’s on the field, drives tend to end in points. He’s a good runner and moves well in the pocket.

Thompson isn’t a guy the Red Raider defense will be able to sack much, but applying pressure could prevent him from making plays downfield. The Texas Tech secondary has had some great plays in coverage this season, but they’ve also had a handful of breakdowns. Making Thompson uncomfortable and slowing Robinson down gives Texas Tech their best chance to leave Austin with a win.

This game is going to be very, very close. Texas Tech has shown strength in areas of the game that give a real chance not just to remain competitive in this one, but even walk away with a win. This matchup feels like it’s going to be less about who beats the other team, and who ends up beating themselves. The Red Raiders have to force turnovers and they need to capitalize on the ones they do. That’s no easy task considering the Longhorns have thrown just one interception and lost one fumble this season.

The way Thompson uses his legs will be another key factor in determining the outcome. Having to account for both Thompson and Robinson in the run game could cause the Texas Tech pass defense to struggle. Slowing down the run game gives the Red Raiders their best chance at victory, but that still feels like an uphill battle. 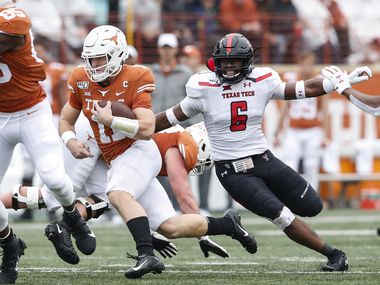