Texas-Texas Tech isn’t a rivalry of the caliber of Texas-Oklahoma — or even Texas-Texas A&M — but it’s clearly still important enough that both schools have agreed in principle to play a yearly non-conference game when Texas departs for the SEC. Texas has historically dominated this intrastate rivalry, and this millennium it hasn’t even been close, with Texas winning 17 of its 21 matchups since the turn of the century.

Last year’s meeting was one of the most ridiculous games Texas has won in years. That shootout in Lubbock had everything from an overtime victory, two onside kick recoveries, a punt return for a touchdown, four interceptions, four fumbles, a 75-yard touchdown run, and both quarterbacks throwing for five touchdowns each.

Oh — and not to mention — Sam Ehlinger rallied Texas back from a 15-point deficit with just over three minutes remaining to make it to overtime. A Joshua Moore overtime touchdown and a SaRodorick Thompson fumble sealed the 63-56 win for Texas.

The significance of this year’s meeting is that both teams are vying for a positive start to Big 12 play, and Texas frankly can’t afford to slip up again if it has any hope of competing on the Big 12 or national stage.

When Texas has the ball

Whether or not Texas can establish the run game against Tech will have little to do with Texas’ talent at running back, but rather with the question marks surrounding its offensive line. Texas had no trouble running the football last weekend against Rice, thanks to an embarrassment of riches the Longhorns have in its running back room. But getting the ground game going against Tech will be a different story for Texas, who failed to get anything going in that regard against Arkansas.

Also stemming from Texas’ weak offensive line is its struggles with the pass block this season. Despite the rout against Rice, Casey Thompson was hit pretty hard twice, and one of those hits in the backfield led to an interception. If Saturday’s encounter is to be anything like last year’s shootout for Texas, its offensive line needs to step up big time.

If Texas can’t get its passing game going, expect Bijan Robinson and Roschon Johnson to carry the Longhorns offense on Saturday, yet again.

When Texas Tech has the ball

Texas linebacker DeMarvion Overshown said he is most wary of the deep threat that Texas Tech’s offense provides. Last week against FIU, Tech proved why Overshown’s concern is valid. Red Raider quarterback Tyler Shough went off for 399 yards and threw for four touchdowns against Florida International. All that with his primary target on the bench for much of the game.

Of Ezukanma’s 16 catches on the season, his 75-yard touchdown against Stephen F. Austin is certainly the pick of the bunch. The big 6-3, 220-pound receiver showed off his speed on that one, catching a short slant over the middle and making the rest happen himself for the score.

Tech is also phasing its preferred running back SaRodorick Thompson back into full-time action. Thompson was completely sidelined the first two weeks of Tech’s season and limited to four carries last week as he recovers from shoulder surgery. Tahj Brooks has filled in neatly for Thompson, picking up 284 yards and four touchdowns already this season.

Without Sam Ehlinger under center for Texas, it’s hard to imagine there will be another shootout quite like there was last year. But with Bijan Robinson running rampant out of the Texas backfield, it will be equally as hard for the Red Raiders to blunt this year’s Longhorn attack. I think Robinson and Roschon Johnson will have a field day playing at home again, but I’m not sure that Thompson will have enough time in the pocket to fully get the passing game going.

I think Shough could make some questionable decisions that lead to interceptions, as he did against SFA, and that Texas will finally force some turnovers. With that said, it will be tough for the Longhorns to completely mitigate the aerial threat that Shough, Ezukanma, and tight end Travis Koontz provide. It will be interesting to see how much of a role Thompson plays after recovering from surgery, and whether or not Tech has been saving him for this game.

All things considered, I think Texas renews its dominance over Tech and kicks off its Big 12 campaign 1-0. But I can’t see the scoreboard looking quite like a basketball score, as it did last year. 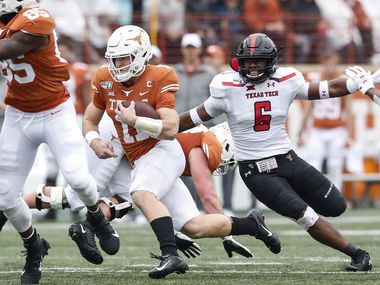