Every year around this time, we update our always-popular Periodic Table of Commodities Returns. I invite you to compare 2021’s returns to previous years, download a PDF of the table and more by clicking here.

Commodities as a whole had their best year in over a decade, due in large part to inflation triggered by unprecedented global monetary and fiscal stimulus. The Bloomberg Commodity Spot Index ended 2021 with a gain of 27%, the biggest yearly jump since 2009, when the financial crisis similarly prompted governments and central banks to flood their economies with liquidity. 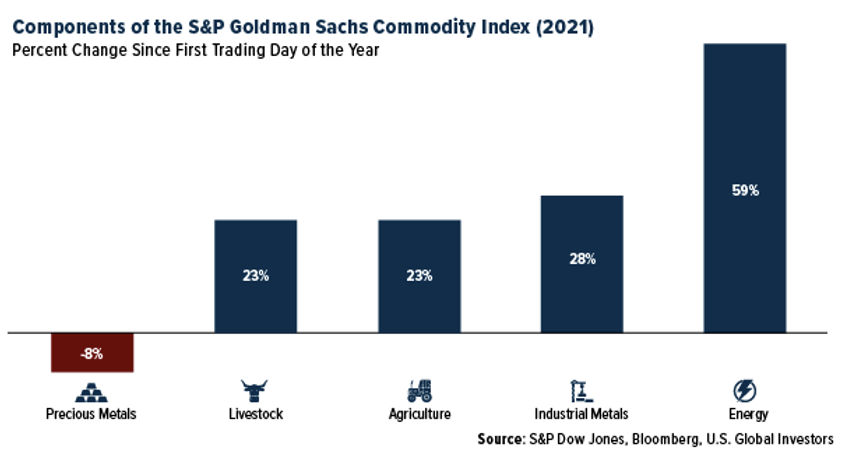 As expected, precious metals were the worst-performing category, down 8%. None of the constituents ended the year in positive territory. That includes , which was the best performer of the bunch with a loss of 3.6%, despite inflation at a decades-long high.

and ’s slump are easily explained. The two metals, as you may be aware, are used in the production of pollution-scrubbing catalytic converters in automobiles. However, car-makers were hampered by the global semiconductor chip shortage, which slowed the output of new vehicles and hurt platinum and palladium demand. Looking ahead, demand could take a more significant hit as electric vehicles (EVs), which do not need catalytic converters, enter the mainstream.

The main headwind slowing gold in 2021 was the belief that the Federal Reserve would raise rates sooner than expected and reduce its asset holdings to tame inflation. I’ve seen forecasts of as many as four rate hikes in 2022, but I don’t believe the Fed will be that aggressive and risk crashing the economy and stock market.

Nevertheless, investors shunned the yellow metal in 2021. Gold-back ETFs saw outflows of $9 billion, with much of that rotation occurring in North American funds, according to the World Gold Council (WGC). This represented the biggest annual outflow since 2013. The WGC points out, though, that despite the selling, gold ETF holdings remained significantly above pre-pandemic levels, as funds experienced record inflows of $49 billion in 2020. 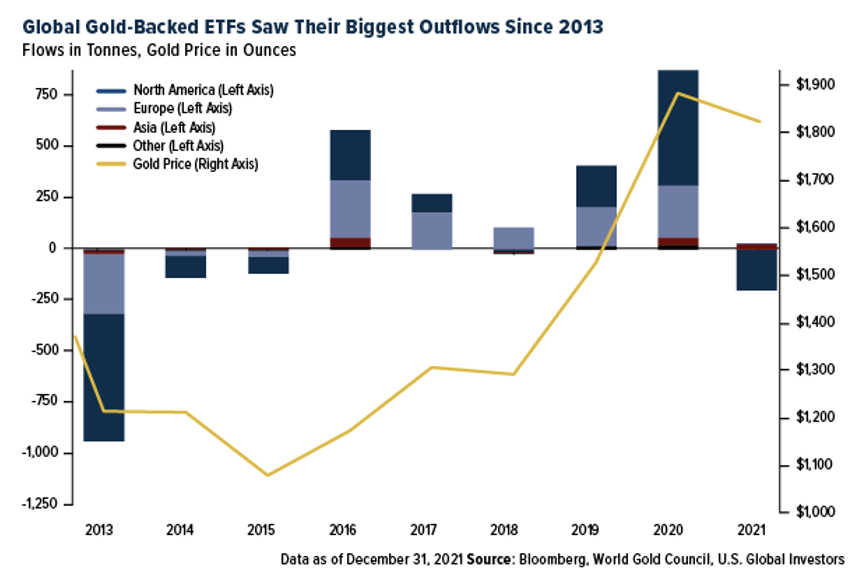 I believe gold is greatly undervalued right now, and as I told Investing News Network’s Charlotte McLeod last week, the metal should really be about $1,000 an ounce higher than it currently is. Gold’s standard deviation over the rolling 12-month period is approximately 20%. At today’s prices, a one-standard deviation move would put the metal’s value at around $2,150, which would be a new all-time high.

I’m not projecting this will happen. It’s just math and probability. That said, we could be looking at another challenging year as the Fed is set to tighten monetary policy. This would strengthen the a headwind for the gold price.

Let’s return to energy. An interesting article appeared in the Wall Street Journal last week, penned by Bjorn Lomborg, author of False Alarm: How Climate Change Panic Costs Us Trillions, Hurts the Poor and Fails to Fix the Planet. Lomborg believes that today’s soaring energy prices are “likely a sign of things to come,” thanks to world governments’ climate policies. Specifically, he takes aim at unreasonable decarbonization efforts:

“Limiting the use of fossil fuels requires making them more expensive and pushing people toward green alternatives that remain pricier and less efficient.”

Indeed, I’m sure you felt the pain at the pump this past year, and families in Europe continue to deal with all-time high energy prices.

You might think that coal use is rapidly on the decline, but believe it or not, coal-fired power generation reached an all-time high last year, driven by demand for cheap energy in China, India and other emerging economies. Because production has not kept up with demand, this pushed coal prices to record highs in 2021, making electricity, not to mention food and transportation, even less affordable for families residing in countries that haven’t fully phased out fossil fuels.

Consider Germany. Coal was its primary source of electricity generation in 2021, a year that also saw wind energy drop to its lowest level since 2018. And yet the country—now under the control of the Social Democrats, Free Democrats and Greens—is still on track to phase out coal by the end of this decade.

As a result of renewed demand for fossil fuels, companies involved in oil and gas saw their stock surge nearly 50% last year, beating renewable energy companies for the first time since 2016. 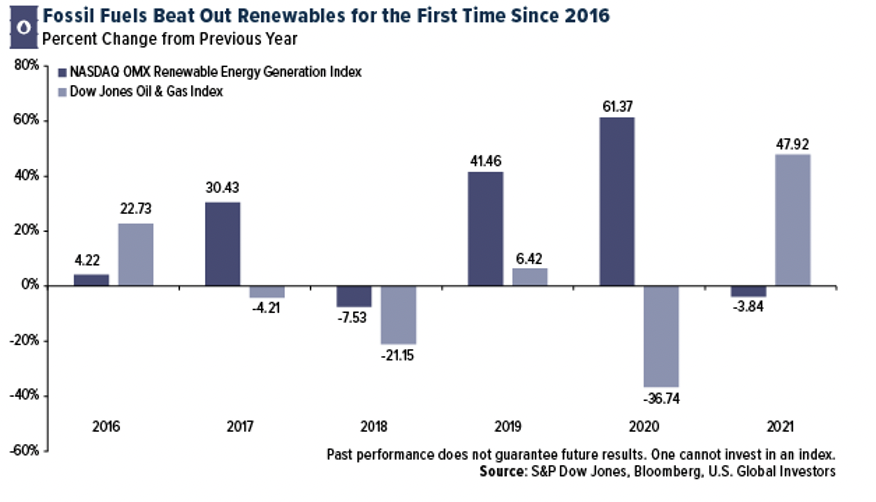 All opinions expressed and data provided are subject to change without notice. Some of these opinions may not be appropriate to every investor. By clicking the link(s) above, you will be directed to a third-party website(s). U.S. Global Investors does not endorse all information supplied by this/these website(s) and is not responsible for its/their content.

The standard deviation is a statistic that measures the dispersion of a dataset relative to its mean and is calculated as the square root of the variance.

The Bloomberg Commodity Index is a broadly diversified commodity price index distributed by Bloomberg Index Services Limited. The S&P GSCI is a composite index of commodities that measures the performance of the commodities market. The NASDAQ OMX Renewable Energy Generation index is a primary sector index of the Green Economy Index designed to track companies that produce energy through renewable sources such as solar, wind, geothermal, wave and fuel cells. The Dow Jones U.S. Oil & Gas Index is designed to measure the stock performance of U.S. companies in the oil and gas sector.