NIO is starting to regain some attention from investors, and in particular retail traders, after it fell off the radar in August and September. The reasons are well established at this stage with the Chinese crackdown on a host of tech companies spooking investors and leading many to the exit. Up until that stage, NIO has been a tech darling with a strong and loyal retail fan base. The company is in the hot electric vehicle (EV) space and is also a tech company, which ensured it was high on the agenda of retail traders who tend to look for high growth stocks.

NIO had an incredible run in 2020 going from approximately $3 to over $50 as investors pilled into its high growth potential. Other peers saw similar growth such as fellow Chinese EV makers LiAuto (LI) and Xpeng (XPEV). Since peaking at $55 in July, NIO has gradually trended lower as China began its regulatory crackdown on tech names. First, DIDI was the target, and then it spread to others as China grew increasingly concerned over its growing tech companies and the large amounts of data they produce and store. NIO stock retraced back to nearly $30 at the start of October. Are things now about to change, and is NIO stock about to turn around?

Chinese tech names could be set for a bounce now that a ruling on Meituan has paved the way for some gains in Hong Kong trading. Meituan is a food delivery company and was hit with a $530 million fine by China’s State Administration for Market Regulation (SAMR). This fine is actually less than what analysts had feared, and many Chinese tech stocks are surging in Hong Kong with Alibaba (BABA) up over 8%.

NIO itself has also shown resilience in its latest delivery numbers despite global chip issues affecting EV makers and hurting NIO’s August numbers. From August to September, NIO has almost doubled its delivery numbers to 10,628. This may be a sign it is managing to work around chip issues and adjust production accordingly. Goldman Sachs upgraded NIO stock on Thursday to a buy rating with a $56 price target.

The potential for NIO stock breaking out is shown by the Relative Strength Index (RSI) finally breaking its long-term downtrend and also crucially breaking above 50 at the same time. The Moving Average Convergence Divergence (MACD) has already crossed, giving a bullish signal. NIO has already broken the 9-day moving average. All is looking good. To confirm this breakout we really want to see NIO make a significant new high, and getting above $37 is our signal. 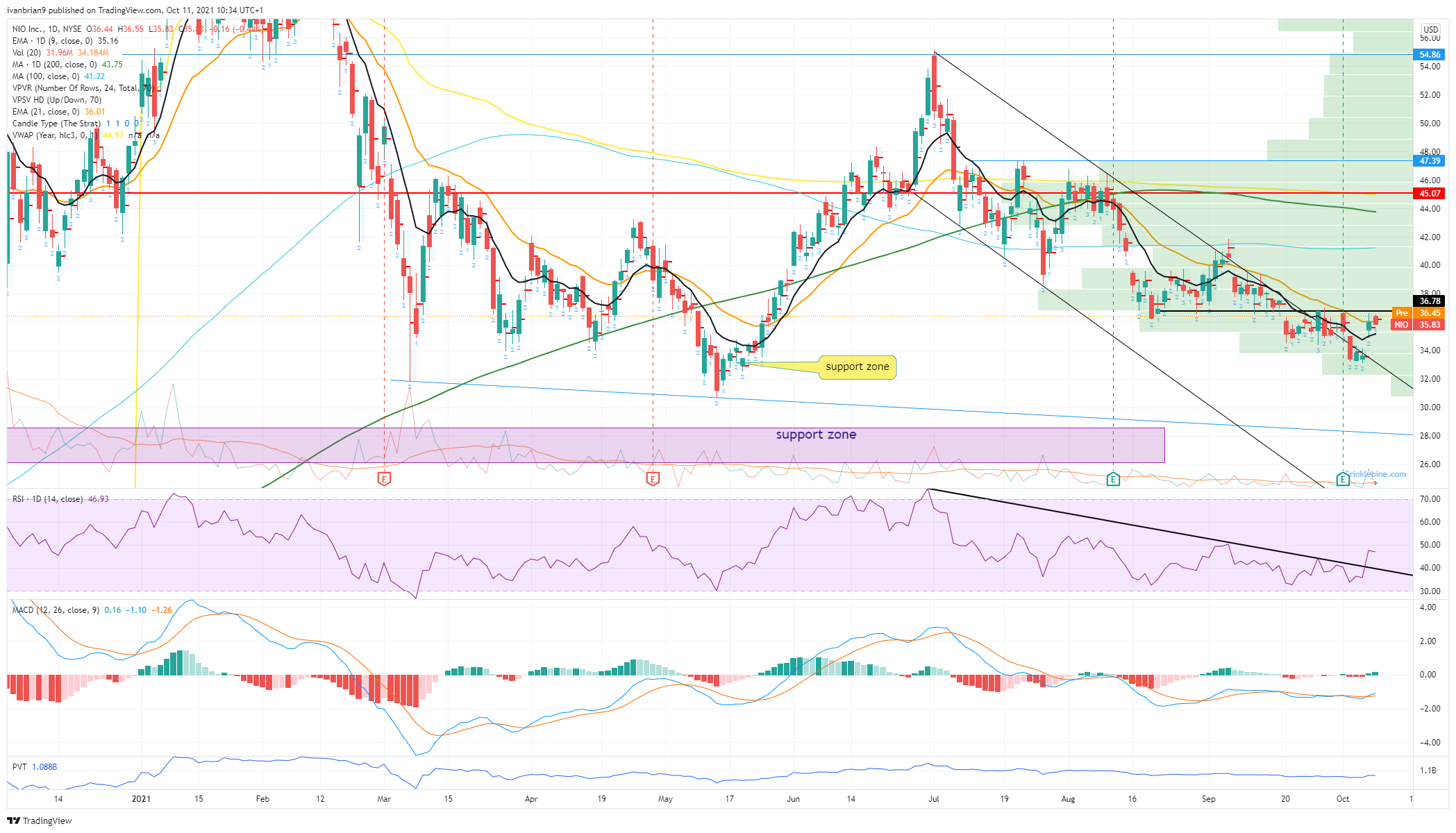