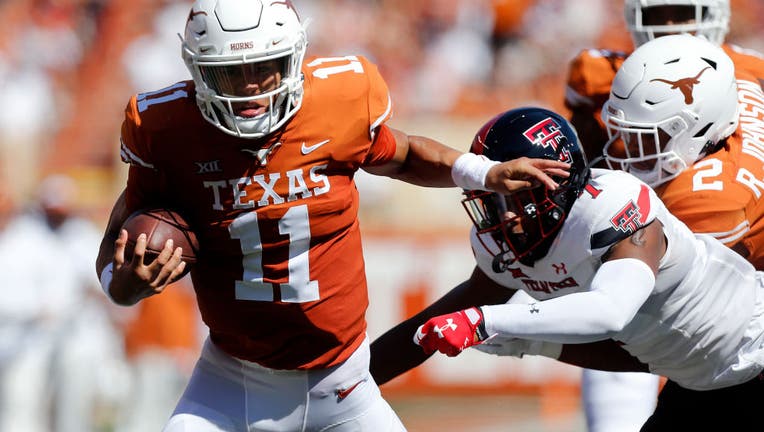 AUSTIN, Texas – Casey Thompson threw five touchdowns and ran for another as Texas continued its offensive explosion since naming him the starting quarterback with a 70-35 rout of Texas Tech on Saturday.

With Thompson at the controls of the offense, the Longhorns have scored more than 40 points in the first half in consecutive games while mixing Thompson’s ever-expanding role as a passer with a powerful running game.

Thompson was 18-of-23 passing for 303 yards and ran for a score in the first half. Hudson Card started the first two games for Texas (3-1, 1-0 Big 12), but was replaced by Thompson after the Longhorns struggled badly in a road loss at Arkansas.

Texas scored on all five of its possessions in the first half against Texas Tech and added a 27-year interception return by Josh Thompson. Three of Casey Thompson’s touchdown throws went to freshman Xavier Worthy, including a 23-yard touch pass into end zone coverage, and a 62-yard score when Worthy broke two tackles and sprinted away from two defenders.

Texas scored 70 points for the first time since beating Colorado 70-3 in the 2005 Big 12 championship game.

Texas Tech quarterback Henry Colombi passed for 324 yards and three touchdowns for Texas Tech (3-1, 0-1) after coming on for injured started Tyler Shough in the second quarter.

Texas Tech: That promising 3-0 start blew up quick and will raise new pressure on third-year coach Matt Wells, who is looking for his first winning season in Lubbock. The Red Raiders came in as one of the top rush defenses in the league but got pushed around at the line of scrimmage as Texas rushed for 336 yards, and missed a lot of tackles in the open field. Colombi’s solid game in relief will raise some new questions at quarterback if Shough can return.

Texas: Worthy has become the go-to target for Thompson and continues to deliver big plays. He has four touchdowns on the season. Of concern for Texas will be the big plays surrendered by the defense after a strong start. The Red Raiders never threatened a serious rally, but giving up touchdown throws of 40, 69 and 75 yards will be of concern for the Longhorns.

Texas plays next Saturday at TCU, where the Longhorns haven’t won since 2013.