After the U.S. (CPI) soared by 5.3% year-over-year (YoY) on Sep. 14, investors celebrated the news due to the perceived impact on the Fed. To explain, accelerating inflation could expedite the Fed’s taper timeline and force the central bank to raise interest rates much sooner than expected. However, when inflation is perceived as peaking, investors price in more patience from the Fed and the optimism helps uplift the PMs. 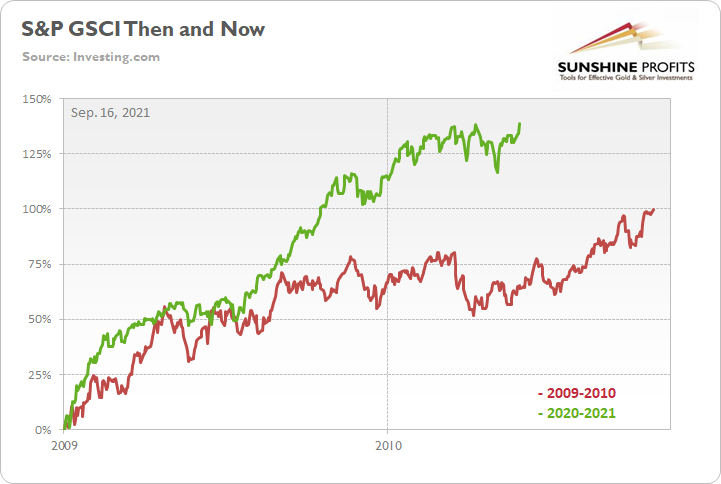 Furthermore, while I’ve been warning for months that speculation in the commodities market is the main driver of the inflationary surge, proclamations of $100 oil are mutually exclusive to the Fed achieving its dual mandate.

To explain, the weighting of the S&P GSCI is of immense importance. With energy accounting for roughly 54% of the index’s movement (the red box below), – which is up by 4.15% this week and up by 6% since the beginning of September – is trading like the Fed is on hold. However, while investors want to have their cake and eat it too, higher commodity prices will only increase the inflationary momentum and put more pressure on the Fed to act.

To that point, the S&P GSCI declined by roughly 2.5% in August. As a result, it’s no coincidence that inflationary pressures calmed once commodity prices stopped rising. For context, ‘calmed’ is quite inaccurate. However, since 5.3% YoY inflation seems to pass for good news these days, we’ll oblige. Looking ahead, though, the S&P GSCI has already risen by more than 3% in September. And if the monthly strength continues, higher prices should put upward pressure on the Commodity (PPI) and reignite cost-push inflation’s impact on the U.S. economy.

For context, I highlighted on Sep. 15 that the PPI/CPI relationship remains on trend: 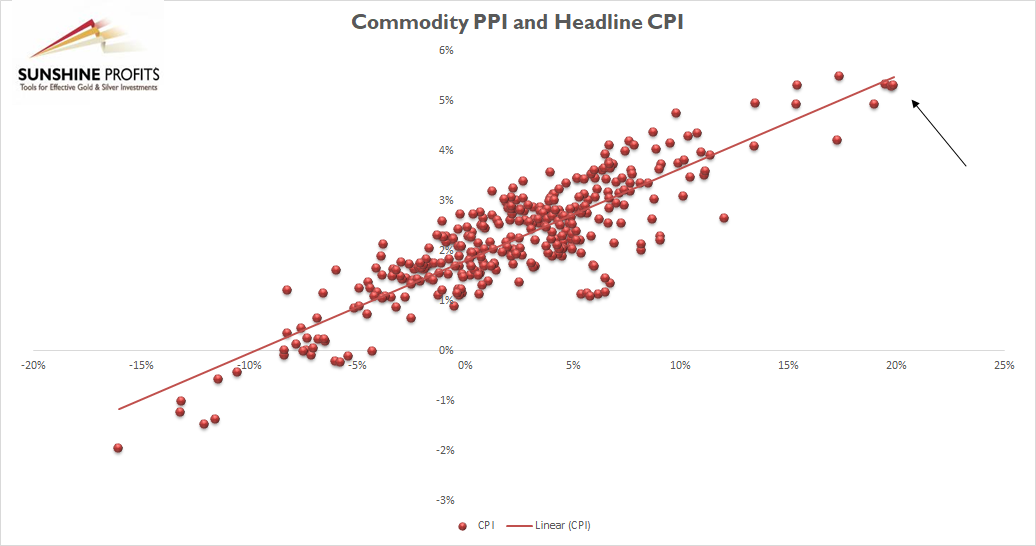 As further evidence, while proponents of the “transitory” narrative cite used cars & trucks, lodging away from home and airfares as items that will mean revert (we agree), reopening components actually fell in August while the overall CPI remained elevated. 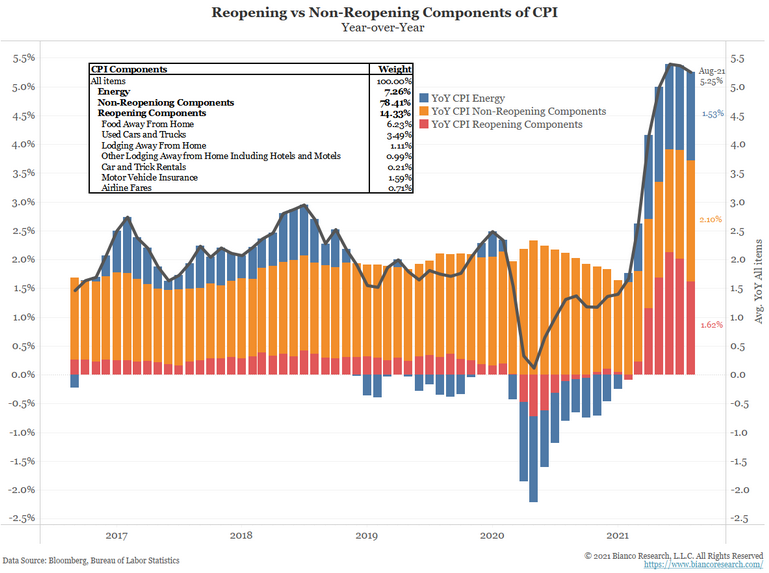 Reopening Vs Non-Reopening Of CPI Components

To explain, the blue (energy), orange (non-reopening) and red (reopening) bars above segregate the various contributors to the headline CPI. If you analyze the right side of the chart, you can see that reopening components peaked in June and have come down. Conversely, if you focus your attention on the blue bars, notice how energy accounts for roughly one-third of the headline CPI and its share actually increased in August? Furthermore, the blue bars don’t account for the inflationary contributions of industrial metals, agricultural commodities, plastics, or shipping costs (which are at all-time highs). As a result, even if the reopening metrics begin to fade, higher commodity prices and prospective rent inflation should add upward pressure to the headline CPI over the medium term.

Decomposing the former, with the Delta variant surging since late July, social activities have been the hardest hit. And after the entire reopening basket declined month-over-month (MoM) in August, progress on the health front could reverse that decline in the future. 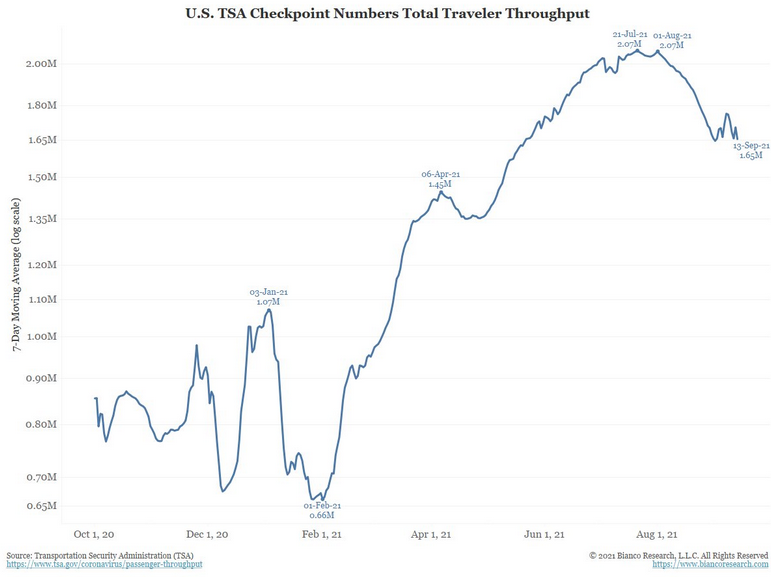 To explain, the blue line above tracks the seven-day moving average of U.S. airport traffic. If you analyze the right side of the chart, you can see that traveler demand peaked when the Delta variant surged and has rolled over ever since. Thus, it’s no surprise that airfares also declined. However, if (once) the Delta variant fades, travel demand should re-accelerate and airlines will likely raise prices again. Summing up, while we consider the reopening basket an immaterial piece of the inflationary puzzle, further declines in “transitory” components still seems unlikely at this point.

Moving on, the New York Fed released its on Sep. 15. And after plunging in August, the headline index increased from 18.30 to 34.30 in September. Moreover, checking off all of the Fed’s boxes, the report revealed:

“The prices paid index held steady at 75.7, and the prices received index edged up two points to 47.8, marking its third consecutive record high.”

On top of that, while input and output inflation remains the talk of the town, wage inflation is still on the up and up. And after Walmart (NYSE:) (the largest employer in the U.S) announced a wage increase on Sep. 2, Amazon (NASDAQ:) (the second-largest employer in the U.S.) followed suit on Sep. 15 and said that its average starting wage will increase to more than $18 per hour. Moreover, the company plans to hire another 125,000 warehouse and transportation workers to prepare for the holiday season.

Finally, with inflation surging and the Fed’s patience exasperating the problem, the only way for inflation to prove “transitory” is for the Fed to strengthen the and reduce the incentive for investors to bid up commodity prices. If not, the dovish rhetoric will only accelerate commodities’ fervor and the cost-push inflationary spiral will continue. However, while Chairman Jerome Powell may come across as slow-witted, he likely understands what’s happening. And with political survival often a motivator of policy initiatives, inflationary pressures are already affecting consumer sentiment. As a result, continuing QE is actually doing more harm than good.

The bottom line? The Fed’s taper timeline remains on track and the USD Index likely awaits the fundamental cue. Moreover, the longer the Fed delays the announcement, the faster it may have to move over the medium term (which is bullish for the USD Index). And with that, Scotiabank told its clients that the Fed may deliver an autumn surprise and that the U.S. dollar should benefit from the hawkish move.

“We think a combination of modest economic revisions (by the Fed) and steady messaging on the interest rate outlook should be supportive for the U.S. dollar, given that many other central banks are likely to lag the Fed’s policy normalization process by a substantial margin.”

In conclusion, gold underperformed on Sep. 15 and stock-market euphoria wasn’t enough to uplift the gold miners or sink the USD Index. And with the former demonstrating relative weakness (considering other commodity producers were on fire) and the latter demonstrating relative strength, prior bouts of euphoria often coincided with sharp declines in the USD Index. However, with the Fed’s taper timeline inching closer and inflation likely to accelerate until a formal announcement commences, the Fed’s policy conundrum will likely uplift the U.S. dollar and upend the PMs over the medium term. 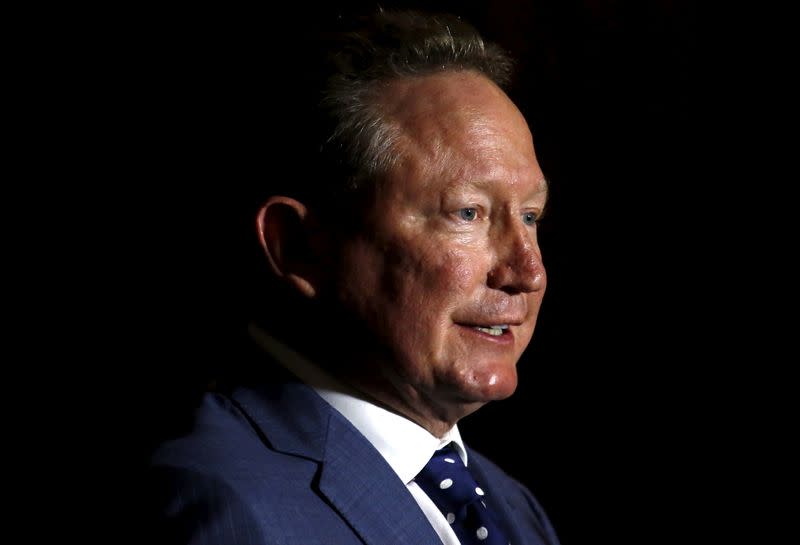