Ambani Is Coming for India’s Phones and Wallets 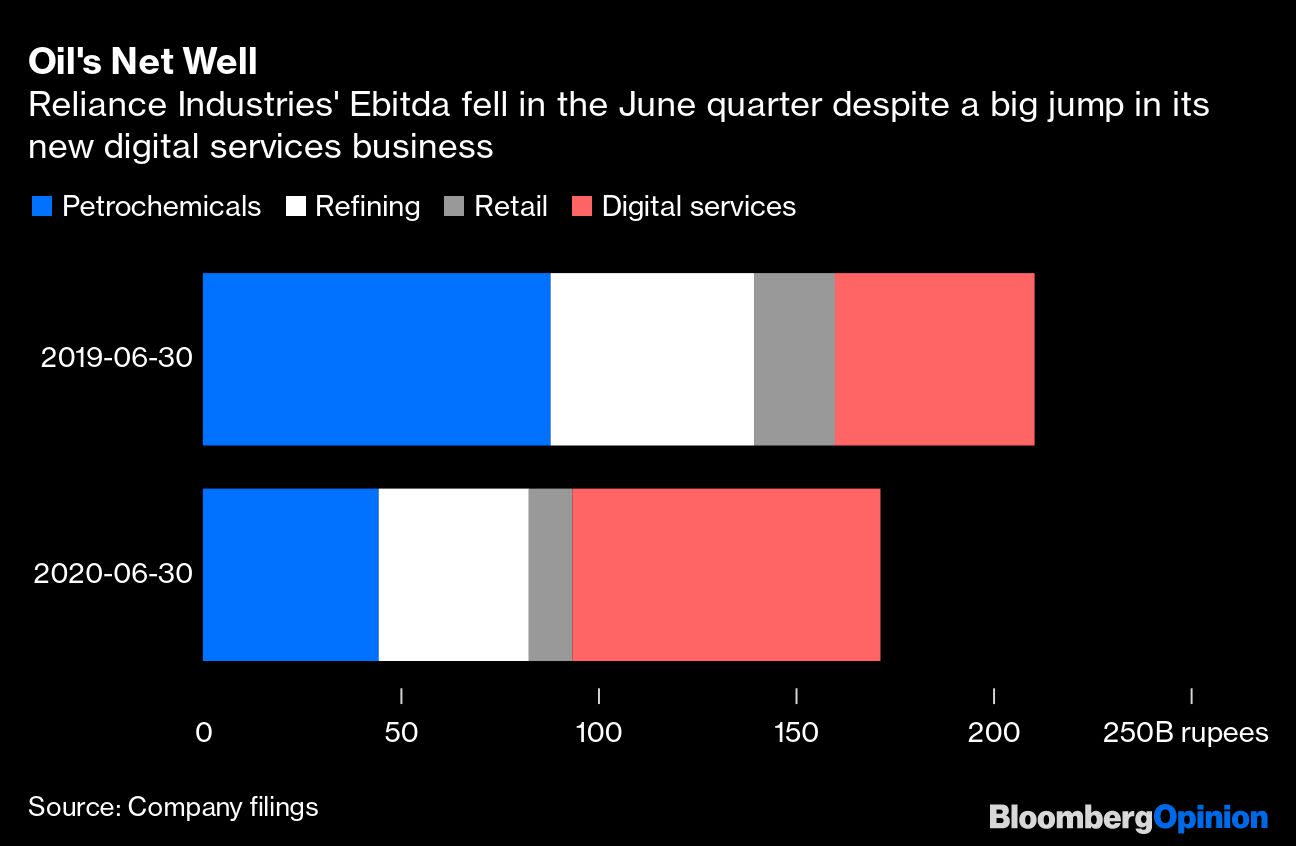 (Bloomberg Opinion) — Things nobody should lose in a taxi — their phone and wallet —  are what India’s richest man wants to control. And Mukesh Ambani intends to do it in a market of a billion-plus consumers.

The oil-and-petrochemicals tycoon’s digital services startup requires him to dominate the use of mobile devices, while his retail chain, India’s largest, needs maximum grip on customers’ moneybags. Through the fog of the pandemic, the billionaire’s flagship Reliance Industries Ltd. is showing glimpses of this twin-track strategy.

Although padded by a one-time gain from selling 49% of its fuel retail business to BP Plc, net income of $1.8 billion in the June quarter beat all analyst estimates. And this when retail garnered only $145 million in earnings before interest, taxes, depreciation and amortization, a 47% drop from last year. A big jump in digital services helped Reliance cushion the Covid-19 blow, which has hit its petrochemicals and refining cash cows really hard.

The outlook for energy and materials is gloomy even in the long term. However, the wobble in India’s domestic retail is temporary, a result of the government’s sudden March lockdown. What’s important is that together, the two growth areas of digital and retail brought in earnings in excess of $1 billion last quarter, a sea change from a year earlier, when the older commodities businesses overshadowed profit from the new consumer-focused units two to one.

This remaking of Reliance will be watched keenly both in Silicon Valley and on Wall Street. A $20 billion fundraising spree from marquee investors and tech giants, including Facebook Inc. and Alphabet Inc., has established Ambani’s Jio Platforms Ltd. as the most ambitious digital services play to emerge from India.

From entertainment, education and healthcare to 5G for self-driving cars, Jio hopes to collect tiny sums from roughly 400 million subscribers of its core wireless service. An affordable Android phone, with an operating system built by Alphabet’s Google, will be the tool for reaching the low-income bottom of the Indian customer pyramid. If the digital business can sustain its 30%-plus sales growth at 40%-plus Ebitda margins, a U.S. initial public offering of Jio at a $100-billion-plus valuation is within reach. That’s roughly two-fifths higher than what analysts believe it’s currently worth.

Commerce within Jio, conducted perhaps over Facebook’s WhatsApp payment engine, will be incidental to how customers spend their six hours online. To dominate the more deliberate purchases, Ambani will need to go offline. That’s where his 29 million square feet of retail space — and a virtual network connecting independent neighborhood stores with households — would come in handy. A fifth of Reliance Retail’s revenue comes from food and grocery, which is low-margin but sticky, assuring footfall. It’s also a category with tall barriers to entry, because fresh food requires an intricate farm-to-store supply chain in a country where transportation and storage are perennial challenges.

At this month’s annual general meeting, Ambani promised to induct “global partners and investors” in retail over the next few quarters, hinting at a repeat of the fund-raising party at Jio.

The Reliance empire’s biggest draw to global investors is its alignment with Prime Minister Narendra Modi’s policy priorities. Modi badly needs a success story to repair some of the economic damage caused by the pandemic, but there aren’t many private-sector balance sheets with the heft to give expression to his rhetoric of self-reliance, which has the goal to reduce imports of Chinese-made goods. Most other Indian business groups — including that of Ambani’s younger brother, Anil — are sinking in unsustainable leverage. Reliance, however, has hunkered down after a seven-year, $100-billion spending binge, and cut its net debt to zero.

With the U.S.-China relationship breaking down, the West needs a proof of concept of India as an alternative investment opportunity. Not in five years when the Covid impact has faded, but today. That’s what Ambani is promising to provide by extending his dominance over the phone and wallet.

Andy Mukherjee is a Bloomberg Opinion columnist covering industrial companies and financial services. He previously was a columnist for Reuters Breakingviews. He has also worked for the Straits Times, ET NOW and Bloomberg News.