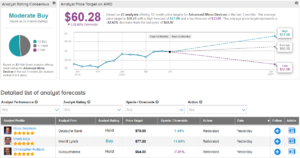 Merrill Lynch analyst Vivek Arya said on July 27 that Advanced Micro Devices (AMD) is the biggest beneficiary of Intel’s (INTC) 7-nanometer product delay. During its second-quarter earnings release on July 23, the chipmaker announced that the launch of its new processor chips would be postponed by a year.

The five-star analyst reiterated his Buy rating on the stock and raised the price target to $77 (11.6% upside potential) from $65, saying that “he has higher confidence in AMD’s medium/longer-term prospects.”

Arya pointed out that Intel’s product “delay could accelerate AMD market share gains back toward their historical peaks of 20% for PC and 25% servers, up from 17% and 10%, today.” He expects AMD to be “on track to achieve earnings power of $3-plus by 2023, suggesting a CAGR of 43%.”

Similarly, Raymond James analyst Chris Caso is also confident about the impact of Intel’s 7-nanometer product delay, saying that “the news will be viewed as a positive for AMD since it will now have transitor advantage for the next 3 years.”

Currently, the rest of the Street has a cautiously optimistic outlook on AMD. The Moderate Buy analyst consensus is based on 12 Buys and 11 Holds. The average price target of $60.28 implies a potential downside of 13%. (See AMD stock analysis on TipRanks).