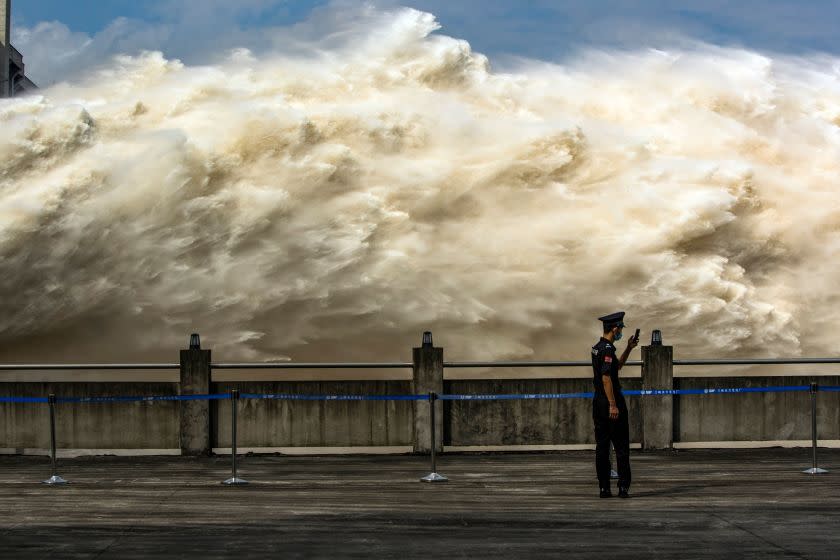 The white-haired farmer ran barefoot to his fields at 2 a.m. so he could harvest his crops before the floods came. He was one of tens of thousands of villagers whose homes and fields were about to be engulfed as a dam gushed open to prevent further damage downstream.

“We have to think big-picture, think of the greater good,” said the farmer identified as Qiao in a recent local news video from Anhui province. “Isn’t it like this every year?”

Qiao spoke as many rural residents of the Yangtze River floodplains do, accustomed to swelling waters whenever big rains hit. But this year is the worst in decades, with 433 rivers surging above flood control levels since June, 33 of them setting records.

The floods have so far affected more than 54 million people, including 3.7 million displaced and 158 people dead or missing. The surging waters have destroyed 41,000 houses and damaged 368,000 more, according to the Ministry of Emergency Management. Death tolls and battered homes are fewer than in previous years, but displacement and economic loss are far higher.

China’s dams — its primary guard against floods — are coming into question as they face increasing strain. Last week, the government blasted open a dam in Anhui. On the same day, more than 16,000 people were trapped in Guzhen town in the same province as the waters surged 10 feet high and broke through levees.

Fears are intensifying over the gargantuan Three Gorges Dam, where the reservoir has risen 50 feet above the warning level, to its highest point since the dam was completed in 2006.

China has more than 98,000 dams, according to the Ministry of Water Resources, more than any other nation in the world. Many were built in the 1950s and ’60s and suffer from poor maintenance.

“These flood control engineering projects are not a panacea,” said Ma Jun, director of the Beijing-based Institute of Public & Environmental Affairs. When torrential rains come, he added, the amount of water concentrated in each reservoir becomes a risk of serious damage, even in small dams.

The heavy storms over the Yangtze River Basin are the result of a western Pacific subtropical high, a pressure system that every summer carries warm air from south to north. The system is abnormally strong this year, said Junyan Liu, climate and energy campaigner for Greenpeace East Asia, but it is not clear if it is caused by climate change.

The flooding, however, is directly linked to man-made problems. China’s over-reliance on dams, excessive construction in low-lying areas, land reclamation in wetlands and lakes, and cities built with poor drainage systems have all exacerbated flood damage.

Those chased from their homes also speak of mismanaged flood systems, lack of government accountability and unequal treatment of the rural poor, who bear most of the flood burden.

In Shexian, a county that suffered its worst flooding in decades this month when an upstream dam overflowed in the middle of the night, residents said they had been given no warning.

“None of this can be reused. It’s all trash,” said Ma Dacong, a waste collector who was removing wooden crates, damaged machinery and soggy mountains of boxed tea at Weiwei Chaye, one of many tea factories whose entire stock had been soaked and spoiled in a matter of minutes.

Ma calculated more than $143,000 in damages to his machines and pickup trucks. But his was just a small business, he said. The factories, which were paying him a few thousand dollars each to clean up, had lost much more. Their workers swept out brownish-yellow water from the floors; the smell of rot lingered in the air.

“The water came so fast. We could never have imagined it,” said Shao, 49, the co-owner of a home appliances shop in Shexian who did not give his full name. His relatives and shop employees sat on its front steps, rinsing kitchen and bathroom appliance parts that they hoped to still sell.

As a small family firm, they had struggled to survive the first half of the year, when coronavirus lockdowns cut into business. Their warehouses were full, with business restarting only a month or so ago as the outbreak waned.

They had been sleeping when the waters roiled around 5 a.m. that day, rushing over riverbanks to swallow sidewalks and streets.

By 5:30 a.m., the water was at people’s shins. By 6 a.m., it was approaching their waists. By 7:30 a.m., it was 6½ feet high, and factory workers, shop owners, and high schoolers who’d woken early for their college entrance exams were climbing onto second floors and rooftops to escape.

Much of the worst damage in this year’s floods, said Ma, has come from broken dams or dikes, or from intentional release of reservoir waters without sufficient warning or protection of people downstream. Yet dams have been a point of pride for the Communist Party.

The Three Gorges Dam in particular has been touted by the Chinese government as a symbol of national prestige, despite controversies over the mass displacement, environmental destruction, pollution, landslides and earthquake risks it has caused.

The choice of where to let waters out and whom to flood highlights inequalities. China tends to prioritize protection of cities — “more populous and economically important regions,” Ma said — at the cost of villagers, mostly farmers or migrant workers.

China’s hukou system ties every citizen’s access to healthcare, education and other social services to their place of origin. Villagers who move to cities for work cannot truly settle in urban areas and tend to send money back to their hometown. Flooding villages and small towns costs less overall than flooding a city, but it means that those with less cushion for survival are hit hardest.

Some environmentalists and engineers say China should revamp its entire flood control approach.

“All our urban planning and design has this single-minded concept: to speed up the water and flush it out. But we need to do the opposite,” said Yu Kongjian, Peking University professor and founder of a landscape architecture firm called Turenscape.

Yu studied design at Harvard and returned to China a year before catastrophic flooding along the Yangtze River killed more than 4,000 people in 1998. He spent the next 20 years urging Chinese officials to adopt an eco-centric approach to urbanization.

China’s cities should be like sponges, not toilets, he said. Water should be slowed down and retained, not flushed away. The way to do that, Yu said, is by restoring riverbanks, wetlands and lakes, complete with their living “sponges” of soil and vegetation that can absorb and keep water locally.

“I am not against dams and hydrological structures, but I am opposed to over-reliance on human flood control, these ‘gray’ infrastructures that destroy the green and natural system,” Yu said. “Just like a person, if you stay alive only by relying on a ventilator and injections, you are fragile. What will happen when the machines break? The human will face the risk of death. Cities are the same.”

Building dams and binding rivers with concrete are methods China learned from the West. But many ecologists there have also begun advocating for fewer dams and giving space back to nature.

“Man cannot win against nature,” Yu said. “Everything man-made is destined to break one day. The ruins of Rome tell us that.”

That was once a radical idea, especially in post-1949 China, which has a tragic history of trying to bend nature to its will. Tens of millions starved to death in China’s Great Famine of 1958-61 after Mao Zedong commanded people to meet unrealistic crop quotas through unscientific planting methods copied from the Soviet Union.

The Soviets also designed China’s Banqiao Dam in Henan province, which was heralded as an “iron dam” able to withstand a once-in-2,000-years flood. An engineer who questioned the design was fired. In 1975, the dam broke during a typhoon, killing an estimated 86,000 to 230,000 people (the government figure versus an estimate from critics) from immediate impact, starvation and epidemics from the floodwaters.

It was the deadliest dam failure in history. China banned media coverage and only declassified information about it in 2005.

But these days, President Xi Jinping has called for China to build an “ecological civilization,” and Yu has found enough government support to start “sponge city” projects in dozens of Chinese cities.

They are a step forward against a ticking clock, as climate change exposes China to more severe and frequent droughts and floods. The occurrence of heavy rains has risen by about 3.8% per decade since 1931, according to China’s Blue Book on Climate Change (2019). That’s a total increase of more than 20%, Liu said: “Very severe change.”

Dams built to withstand floods that happen “once every thousand years” are now facing water levels within 100, or 50 or 10 years of their construction, Yu said. No dam lasts forever, he added. It is not a question of whether but when each one ends — and who potentially pays the price.