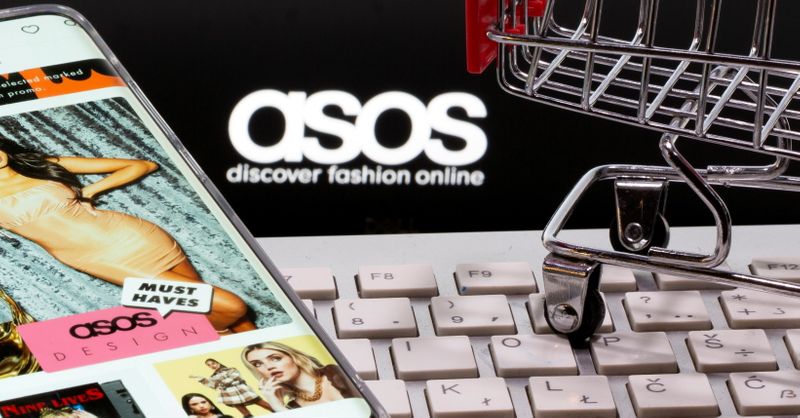 © Reuters. FILE PHOTO: A smartphone with the ASOS app, a keyboard, and a shopping cart are seen in front of a displayed ASOS logo in this illustration picture taken October 13, 2020. REUTERS/Dado Ruvic/Illustration//File Photo

LONDON (Reuters) -ASOS, the British online fashion retailer, parted ways with CEO Nick Beighton on Monday as it warned that supply chain pressures and consumers returning to pre-pandemic behaviour could reduce 2022 profit by over 40%.

Beighton had been with ASOS for 12 years, including six as CEO, and the company said his immediate departure would enable it to find new leadership to accelerate international growth and deliver 7 billion pounds ($9.5 billion) of annual revenue within four years.

ASOS had performed well through the pandemic but warned in July that growth had slowed.

Chairman Adam Crozier said Beighton would not commit to stay at ASOS to see through at least half of its next five-year plan.

“In that conversation with Nick over the last little while we’ve sort of just come to the view jointly that he’s not going to be around for all of that, therefore it’s better to make the change now,” Crozier told Reuters, adding this year’s share price fall was “unhelpful”.

Finance chief Mat Dunn will take on the additional role of chief operating officer and lead the business on a day-to-day basis while a new CEO is sought. Katy Mecklenburgh, currently director of group finance, will become interim chief financial officer.

“While our performance in the next 12 months is likely to be constrained by demand volatility and global supply chain and cost pressures, we are confident in our ability to capture the sizeable opportunities ahead,” said Dunn.

ASOS reported a 36% rise in year to Aug. 31 adjusted pretax profit to 193.6 million pounds, driven by a 67.3 million pound boost from the pandemic when shoppers bought leisurewear, rather that partywear options for a night out, some of which were then returned. Revenue rose 22% to 3.91 billion pounds as its active customer base increased 13% to 26.4 million.

For the new 2021-22 year, ASOS forecast an adjusted pretax profit of 110-140 million pounds, as customer returns normalise. Taking the mid-point of the range, that is 35% below analysts’ average forecast of 193 million prior to Monday’s update.

ASOS warned that supply chain pressures that have hit the movement of container ships and trucks globally during the pandemic were expected to continue through the first half, resulting in longer lead times and constrained supply from partner brands.

Last month shares in rival Boohoo fell 12% after it reported a slowdown in growth and warned on full-year profit.

ASOS said it plans to double the size of its combined U.S. and Europe business within four years and add at least 1 billion pounds to the group’s annual own brand sales.

“If we do the right things and we execute there, then the share price should take care of itself,” said Crozier.