Update: Shares of BlackBerry extended the ongoing upsurge and hit fresh monthly highs at $7.45, although failed to hold at higher levels. The stock price retreated slightly to finish Monday at $7.13, still up 1.42% on the day. BlackBerry shares jumped back into the game in the previous week after a deep slumber, as investors cheered the news that the company “announced 13 channel partners (Distributors & Value-Added Integrators) that will offer BlackBerry® Jarvis® 2.0 to companies that build secure, mission-critical systems in APAC.” Additionally, the company also announced an expansion of its collaboration in China with Marelli, a leading Tier 1 global automotive supplier.

BlackBerry shares are back. The BB ticker is once again trending all over social media and retail trading sites after quite a long hiatus in the wilderness. That’s break to you and me but my editor likes the fancy words! But BlackBerry (BB) is definitely back. It was one of the original stocks caught up in the frenzy of short squeeze speculation last year but dropped off most people’s attention lists as the stock was unable to push on and gave up all of its gains. BB stock fell from $20.17 in June 2021 to $5.80 in February 2022.

BlackBerry was the go-to business phone in the early 2010 decade before being totally outmaneuvered by the emergence of the smartphone. Holding a Blackberry was a sign that you had made it in the business world but the company and phone went the way of Nokia, totally demolished by Apple and other smartphone makers. But both companies Blackberry and Nokia have struggled along with varying degrees of success. Blackberry caught some renewed attention on Monday as it announced its Jarvis 2.0 testing tool will be offered by 13 partners to companies in the Asia Pacific region. “Asia-Pacific is at a tipping point in how it protects infrastructure and industries against growing IoT security threats as digital automation continues to advance,” said Dhiraj Handa, vice president of BlackBerry QNX for the Asia-Pacific region.

Jarvis is a testing tool that allows companies to look for potential branches of security in their systems. “BlackBerry® Jarvis® 2.0 is a software composition analysis and static application security testing solution that is designed to analyze binaries within complex embedded systems. It lets you identify security vulnerabilities in products that have software from multiple sources, without the need for source code. It’s a powerful tool that provides you insights into your binaries and helps you catch potential security issues with the click”, from Blackberry. This is timely given the heightened security and hacker issues surrounding many systems and companies are spending increasing amounts of their IT budgets on security issues.

This certainly reads positively but it is early days in the process. BB stock price has recovered but remains in a powerful downtrend. The recent spike up to the 50-day moving average is encouraging but only a break of $9.47 would really get momentum back towards bulls. Breaking above $48.50 is the first target and would put BB back in a neutral stance. Above $9.47 BB stock is bullish. The first resistance is the 50-day moving average at $7.41. 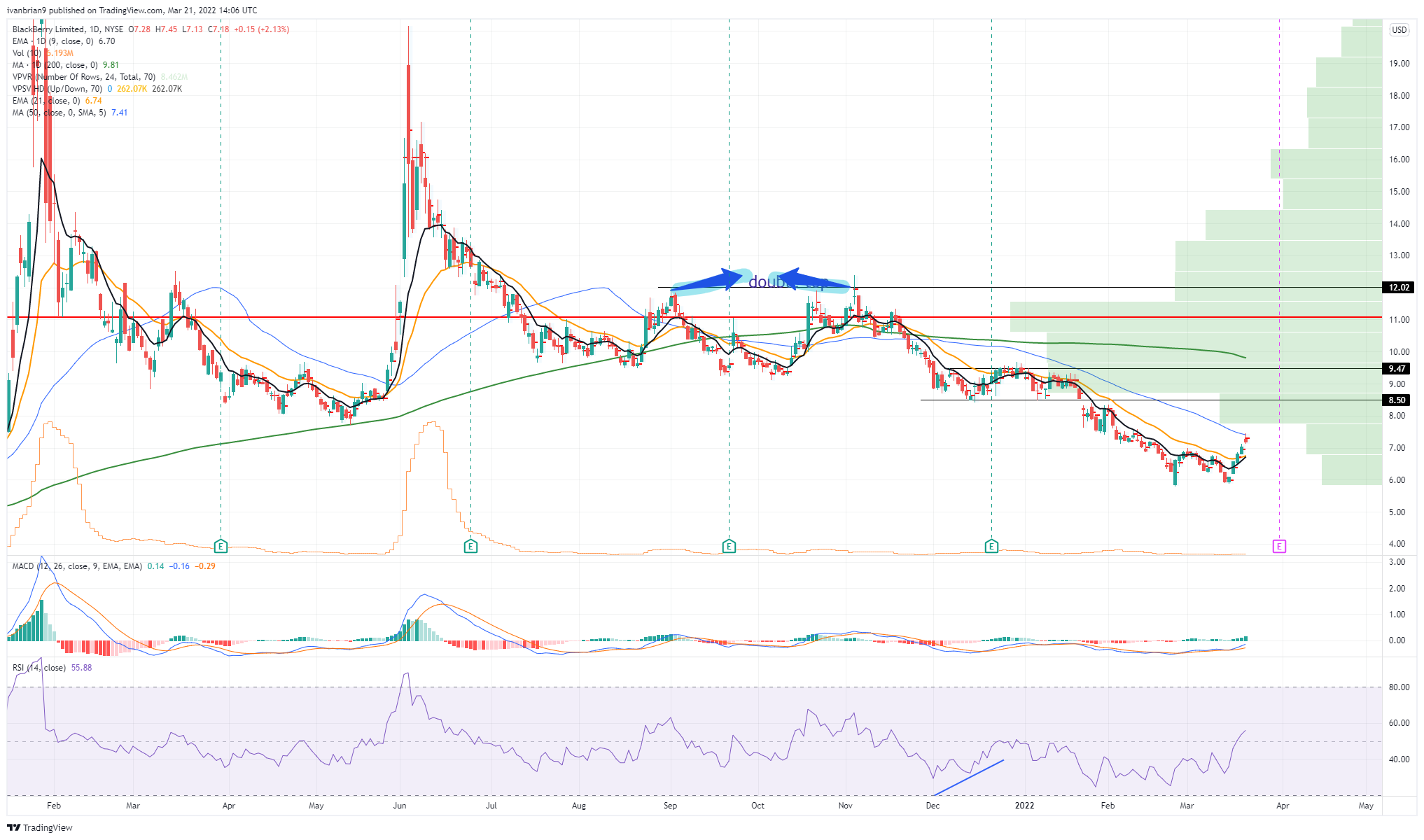