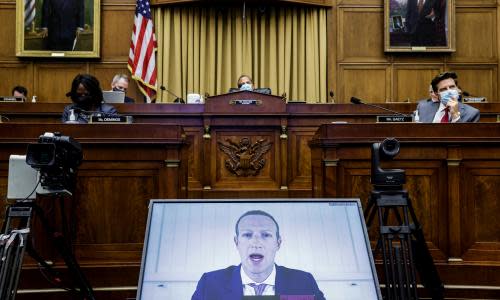 The US’s top tech bosses were told they have “too much power”, are censoring political speech, spreading fake news and “killing” the engines of the American economy, at a combative congressional hearing on Wednesday.

The historic hearing in Washington saw Jeff Bezos of Amazon, Tim Cook of Apple, Mark Zuckerberg of Facebook and Sundar Pichai of Google’s parent Alphabet appear before members of the House judiciary’s antitrust subcommittee and face intense questioning from lawmakers from both sides of the aisle.

The subcommittee has been investigating the companies’ dominance of the online world for over a year, collecting 1.3 million documents and conducting hundreds of hours of interviews. Already in the opening minutes, the subcommittee chairman, David Cicilline, struck a combative tone, pointing out that the companies dominate their respective spheres and accusing them of stifling competition. The complaints against the tech giants are varied but the overarching criticisms are that they have used their dominant position to quash rivals and overcharge the people and businesses reliant on their services.

“Our founders would not bow before a king,” the Rhode Island Democrat said. “Nor should we bow before the emperors of the online economy.”

Republican lawmakers at different times in the hearing directed the conversation away from antitrust to allegations of anti-conservative bias on the platforms, accusing the companies of silencing conservative voices and working to undo Donald Trump’s 2016 election win.

Related: Roger McNamee: ‘Facebook is a threat to whatever remains of democracy in the US’

Google and Facebook took intense heat for their business practices. Cicilline opened the round of questions with allegations from small businesses that Google took over their content and listing on its own pages. CEO Pichai struggled to answer when Cicilline brought up Google taking reviews from Yelp and cross-posting them to its own pages. When Yelp asked Google to stop, Google reportedly threatened to remove Yelp from its search listings entirely. Cicilline called the behavior “economically catastrophic” for other companies online.

“The evidence seems very clear to me that as Google became the gateway to the internet, it began to abuse its power,” he said.

Zuckerberg faced repeated questions about Facebook’s purchase of Instagram in 2012. Referencing internal documents that revealed Facebook bought Instagram to neutralize it as a competitive threat, congressman Jerry Nadler called the acquisition “ exactly the type of anticompetitive acquisition the antitrust laws were designed to prevent”.

Zuckerberg defended the acquisition, arguing Facebook helped Instagram build up its infrastructure and security as it grew rapidly.

Zuckerberg and Pichai also received a beating from Republicans, who repeatedly accused the companies of anti-conservative bias. Representative Jim Sensenbrenner asked Zuckerberg why conservatives are “censored” on Facebook, claiming that Donald Trump Jr was removed from the platform for sharing a video containing false information this week. Zuckerberg politely explained to the representative that it was Twitter that limited Trump’s account for posting the video.

Bezos faced few questions following his opening statement, perhaps because of a technical difficulty with his video feed. Representative Pramila Jayapal pressed Bezos on whether the company used data from third-party sellers in making sales decisions. In a previous hearing, an Amazon executive denied this under oath and was contradicted by a later news report. Bezos was also asked whether the online giant favored its own products when prioritizing certain shipments during the pandemic.

Bezos, the world’s richest man, leaned heavily on his life story in his opening statement, noting that his mother was “a 17-year-old high school student” and his adoptive father is a Cuban immigrant. “Amazon’s success was anything but preordained,” he said before noting that the company had invested $270bn in the US over the last decade and created hundreds of thousands of jobs.

Zuckerberg, too, argued Facebook “got here the American way.”

“We started with nothing and provided better products that people find valuable. As I understand our laws, companies aren’t bad just because they are big. Many large companies that fail to compete cease to exist,” he said.

Cook, the Apple CEO, faced effective questioning from representative Hank Johnson of Georgia, who said the investigation had surfaced concerns that rules governing the App Store review process are not available to the app developers. “The rules are made up as you go and subject to change – and Apple expects developers to go along with the changes or leave the App Store,” Johnson said. “That’s an enormous amount of power.”

Cook argued the App Store does not constitute a monopoly because it does not charge the vast majority of apps to list there. He said 84% of apps are not charged anything and Apple has not increased commissions on apps since 2008.

The hearing comes at a fraught moment for the tech giants with Republican and Democrats both highly critical of their dominance.

Donald Trump, who has attacked the tech companies on numerous occasions, weighed in ahead of the hearing: “If Congress doesn’t bring fairness to Big Tech, which they should have done years ago, I will do it myself with Executive Orders. In Washington, it has been ALL TALK and NO ACTION for years, and the people of our Country are sick and tired of it!”

Trump’s attacks on tech companies have escalated as Twitter and Facebook have made recent attempts to factcheck the president and remove false statements from his account. Trump has accused Facebook and Twitter of censoring conservative views and launched numerous attacks on Bezos and Amazon. Bezos owns the Washington Post, which has been a persistent critic of his presidency.

Republican lawmakers echoed Trump’s frustrations, lamenting the “cancel culture mob” and questioning the platform’s decisions to take down content on hydroxychloroquine, the anti-malaria drug Trump has praised as a Covid-19 treatment.

“I will just cut to the chase: big tech is out to get conservatives,” representative Jim Jordan, a staunch supporter of the president, told the committee.