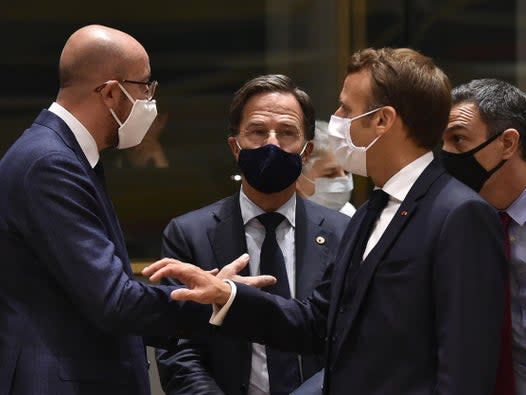 European Union leaders are set to slash tens of billions of euros from funds aimed at preventing catastrophic climate breakdown, after agreeing a coronavirus recovery package after almost five days of difficult talks.

The Brussels summit brought 27 leaders face-to-face after five months of remote diplomacy, in which time the pandemic brought existing cracks across the bloc into sharp focus.

With some diplomats fearing talks over a record €1.1trn budget and €750bn coronavirus stimulus could be “make or break” for the bloc, the distance between the aims of four so-called “frugal” nations – led by the Netherlands – and other member states, finally began to diminish on Monday, albeit at the cost of environmental schemes.

During a dinner meeting on Monday night, EU Council president Charles Michel unveiled new proposals which tabled cuts to climate change schemes in a bid to rework the package into something all countries could agree upon, following days of Dutch-led dissent.

The proposal earmarked 30 per cent of both the EU budget and the coronavirus recovery fund for climate protection, and said all spending must comply with a principle to “do no harm” to EU green goals.

But it slashed the size of the EU’s Just Transition Fund, its flagship pot of money to help wean countries off fossil fuels, and watered down the climate ambitions required for countries to access the money.

Under the plans, the fund will now receive a combined €17.5bn from the budget and recovery fund – down from the €37.5bn set aside in a previous proposal.

To access the money, countries previously needed to have a national target for cutting emissions. Under the new plans, they must commit to the EU’s goal to become “climate neutral” by 2050 – a condition expected to allow Poland to access the fund without pledging to hit net-zero emissions itself.

The coal-heavy country is now expected to receive the largest chunk of the Just Transition Fund, and was the only country which refused to commit to the 2050 climate target at an EU summit in December.

InvestEU, a pot of money earmarked under previous proposals to help meet green goals, was also decimated – to a baseline allocation of less than €4bn, down from more than €31bn previously.

Proposed funding for scientific research will also be slashed from €11.5bn to €5bn.

While some described the plans as likely representing a huge blow to the climate, some observers said the green credentials of the deal would depend on what safeguards are used to ensure money goes to green technologies, and not polluting investments.

Others pointed out that the proposals fell short of the 40 per cent climate spending share needed to align the package with EU climate goals.

The new proposals came days after all of the bloc’s 27 environment ministers signed a joint statement calling for a green recovery as countries emerge from the pandemic.

The talks are the longest EU summit in two decades, with Dutch prime minister Mark Rutte leading a charge backed by Austria, Finland, Sweden and Denmark to limit costs and impose strict reform guarantees on any rescue plan for needy nations.

The €750bn coronavirus fund, partly based on common borrowing, was initially to be comprised of loans and grants sent to member states hit hardest by the virus.

But Mr Rutte said he wanted any grants – which the “frugals” have long opposed completely – to be tied to welfare, tax and pension reforms, and to ensure that it will go towards improving and creating infrastructure and green investment.

A deal envisaging €400bn in grants – down from a proposed €500bn – was rejected by the north on Sunday, which said it saw €350bn as the maximum.The latest compromise proposal stands at €390bn in grants.

After unveiling his proposals on Monday ahead of the agreement, Mr Michel said he was confident the compromises would clinch the deal, saying: “I know that the last steps are always the most difficult but … I am convinced that an agreement is possible.”

Mr Michel tweeted “Deal” shortly after the 27 leaders finally reached agreement at 5.15am.

“This agreement sends a concrete signal that Europe is a force for action,” Michel said at a dawn news conference.

“It is about a lot more than money. It is about workers and families, their jobs, their health and their well-being. I believe this agreement will be seen as a pivotal moment in Europe’s journey, but it will also launch us into the future.”

French President Emmanuel Macron described the deal as “truly historic” and said he was convinced the recovery plan and budget could meet the challenge of the coronavirus pandemic.

“This was a summit whose conclusions are truly historic. We have put in place the capability to borrow collectively, to put in place a collective recovery plan, for the first time,” Mr Macron said.

“With this recovery plan, we will reach a near doubling of the European budget over the next three years.”

Officials said the deal was critical to dispel doubts about the bloc’s entire future.