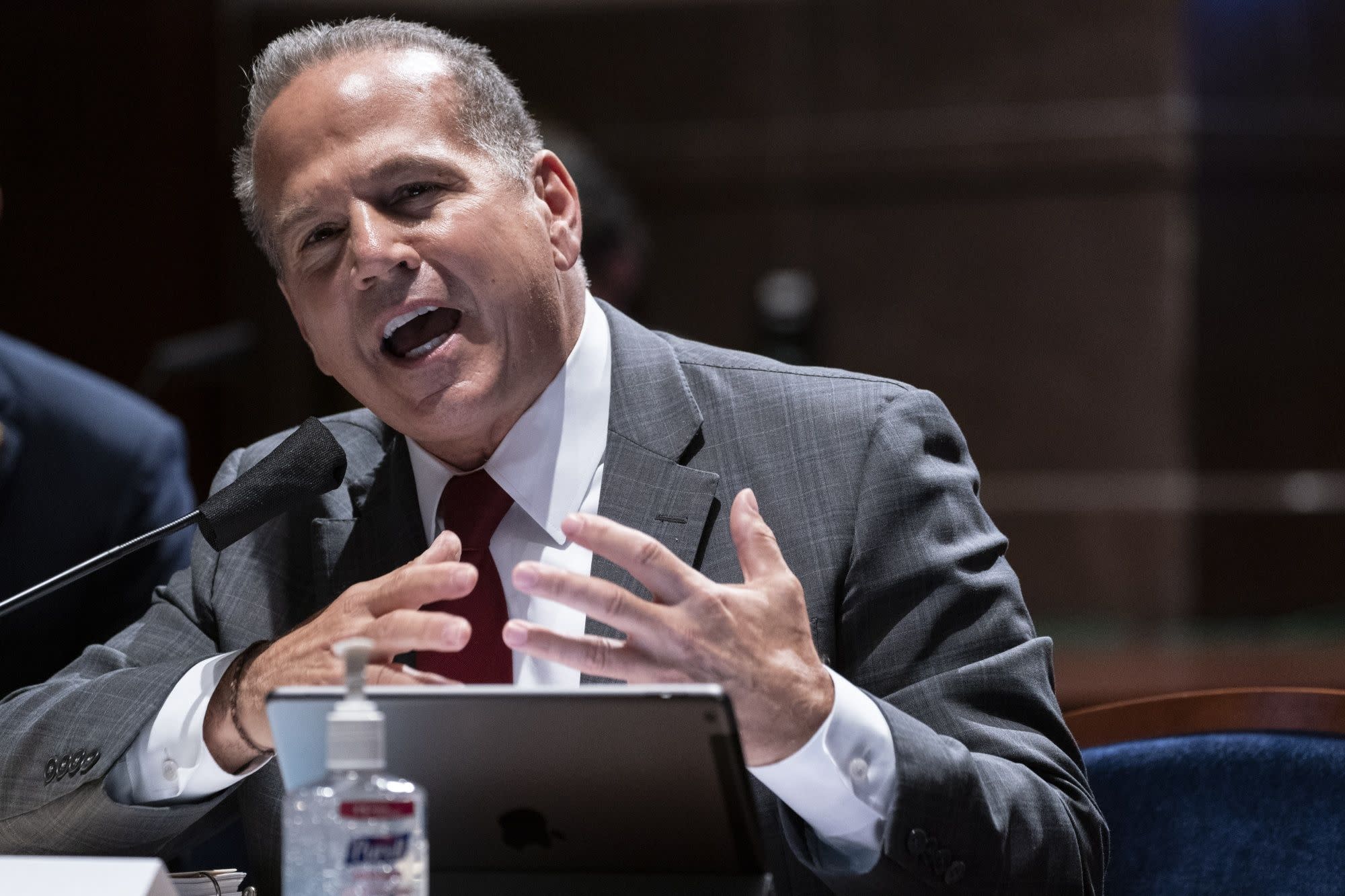 (Bloomberg) — Chief executives from four of the biggest U.S. technology companies will face a moment of reckoning Wednesday in an extraordinary joint appearance before Congress that will air bipartisan concerns that they are using their dominance to crush rivals at the expense of consumers.

The House antitrust subcommittee will hear testimony livestreamed from Amazon.com Inc.’s Jeff Bezos, Facebook Inc.’s Mark Zuckerberg, Alphabet Inc.’s Sundar Pichai and Apple Inc.’s Tim Cook as part of its yearlong inquiry into technology industry competition. The panel is armed with more than a million pages of internal company documents gathered as part of its probe.

Representative David Cicilline, the panel’s Democratic chairman, wanted to hear from the CEOs together as he concludes his investigation into whether the companies are squashing smaller rivals and foreclosing competition. In a coup for Cicilline, the session will mark the first time these tech leaders will appear before lawmakers together. It’s also Bezos’s debut on the witness stand.

The participation of all four CEOs — who command enterprises with a combined value of nearly $5 trillion — signals the degree of pressure they’re facing from an American public increasingly outraged by the industry’s inability to police itself. They’ll likely face questions about whether they’ve done enough to contain privacy breaches, election misinformation and the spread of racist and violent content.

“They will not be able to simply run out the clock or duck by giving general or evasive answers,” said William Kovacic, a former member of the U.S. Federal Trade Commission who is now a professor at George Washington University.

Republicans will likely air concerns shared by President Donald Trump that the companies hold an anti-conservative bias. Bezos has become a Trump target over his ownership of the Washington Post, which has closely covered the administration’s foibles.

The hearing comes as the coronavirus pandemic leaves millions of homebound workers, parents and teachers more reliant than ever on the companies’ online platforms to earn a living, buy groceries, stay connected and educate their children. And the remote video hearing may diminish some of the spectacle, depriving lawmakers of the opportunity to berate the executives in person while also potentially creating hiccups as participants fumble with their mute buttons.

The companies face a variety of complaints about their business practices, from charges that Amazon abuses its power over the third-party merchants that sell on its site to allegations that Facebook acquires companies to eliminate potential rivals. Critics have claimed that Google’s dominance of search and online advertising allows it to preference its own products and squeeze publishers. And some app makers contend that Apple uses its grip on high-end devices to force apps into its payment system, extracing high fees in the process and deciding which ones survive.

The companies, all of which are expected to announce earnings the day after the hearing, have also gone on acquisitions sprees this year, waving off watchdog scrutiny. They all declined to, or didn’t return requests for, comment.

Here’s a look at how the hearing may break down by witness:

Amazon’s Jeff Bezos: Market player or umpire, or both?

The world’s richest man is making his debut before Congress, giving lawmakers a fresh target. Bezos should expect a tough grilling from Cicilline, who holds up the e-commerce behemoth as the prime example of how Big Tech firms use their size to prioritize their own commercial interests over customers’ needs.

Cicilline has also questioned whether an Amazon lawyer told the truth in previous testimony. During a hearing last year, Cicilline slammed Amazon for undermining third-party sellers. He pressed a company lawyer, Nate Sutton, about the relationship, prompting Sutton to deny that Amazon uses individual seller data to launch competing goods.

Subsequent media reports contended that company employees did just that, causing Cicilline to suggest that Sutton may have been untruthful. He said Bezos needed to appear to clear up the matter.

Amazon faces antitrust probes by the FTC, California and the European Union, which are all looking at the company’s role as a marketplace, Bloomberg has reported.

Cicilline’s staffers include Lina Khan, who helped provide the intellectual underpinning of a movement for revamped competition enforcement with her legal scholarship on Amazon.

The CEO who’s arguably provoked the greatest amount of outrage among both parties’ lawmakers, Zuckerberg has been a frequent visitor to Capitol Hill in recent years.

He gave two days of testimony on the company’s privacy practices in 2018 as part of the Cambridge Analytica scandal, in which a U.K. political consultancy with ties to Trump’s presidential campaign harvested data on millions of the site’s users without their knowledge. Last year, he faced skeptical lawmakers about the company’s digital currency, Libra.

Now Zuckerberg is grappling with an ongoing advertiser boycott led by civil rights groups because of what they say are his failures to tackle racism, discrimination, voter suppression and election misinformation on his platform. Cicilline has called Facebook’s policy of allowing politicians to post advertisements that are demonstrably false “a business decision,” rather than a move to protect free speech. Facebook last week started adding voting information labels to posts about the 2020 U.S. election, including those shared by Trump and Democratic candidate Joe Biden.

Democrats may ask about Zuckerberg’s meetings with Trump and whether his hands-off approach to misleading content is designed to appease the White House, which has vowed to punish social-media companies for their supposed anti-conservative bias.

Facebook is the subject of federal antitrust probes by the Justice Department and FTC, which share jurisdiction for enforcement of competition laws but rarely double-up on targets. It’s also under investigation by 45 state attorneys general. Critics have focused on how the company extracts user data to power its advertising operation, as well as its acquisition strategy.

Congress also has been asking questions about Zuckerberg’s purchases of Instagram and WhatsApp, as well as whether Facebook’s treatment of apps it didn’t buy, including Vine, Snapchat, FourSquare and TikTok, were efforts to squelch competition.

In response, Zuckerberg is preparing to argue that hindering American technological innovation only helps China, that Facebook faces threats from companies including TikTok and that the success of properties it acquired was the result of its investment.Although Zuckerberg has previously faced lawmakers, his testimony on Wednesday will be his first focused on antitrust.

While Bezos and Zuckerberg may draw the most rhetorical fireworks, Pichai may be facing the most immediate danger with Attorney General William Barr weeks away from filing a Justice Department antitrust lawsuit against Google for its dominance in the digital advertising market.

The company is also being investigated by a 48-state coalition led by Texas Attorney General Ken Paxton, who is also focusing on digital ads. Other states are looking into the company’s dominance of online search and its mobile operating system. Some of them could also join the Justice Department case.

Google has argued that regulators should establish a broad definition of the ads market, including television. The company also has pointed to the insurgent challenge from Amazon for digital ad spending.

Google is also facing criticism for the way it collects data and how it handles disinformation on services like YouTube. Google’s $2.1 billion deal for device-maker Fitbit Inc. is undergoing an extended antitrust review, a takeover seen as a test for regulators.

Although Pichai previously testified before the Judiciary Committee in 2018 over anti-conservative bias, he may be best remembered in Congress for the empty chair behind the “Google” nameplate when he angered lawmakers earlier that year by skipping a Senate Intelligence Committee hearing on foreign election meddling.

Of all the CEOs, Tim Cook has been the most successful in deflecting scrutiny from Washington. He’s forged strong relationships with the White House, appeared on business councils with Trump and pushed the company’s trade interests. Apple has largely avoided conservatives’ accusations over liberal bias. Cook has also dodged the kind of criticism that Democrats have launched against Zuckerberg for courting Republicans.

While it has stayed out of the political crossfire, Apple is the subject of a Justice Department antitrust probe for rules that require many app makers to use the company’s payment system, Bloomberg has reported. App makers such as Spotify Technology SA are raising red flags, particularly in Europe, with complaints about the fees Apple charges on its App Store, especially when the company has competing offerings.

Apple defended the fees it charges developers who sell software and services through its App Store, saying recently that the 30% cut is standard industry practice and “is similar in magnitude to the commission rates charged by many other app stores and digital content marketplaces.”

Cook previously testified in 2013 about Apple’s payment of taxes, although he hasn’t appeared before Congress during the backlash to tech power that has grown during Trump’s presidency.