How bad could U.S.-China relations get? 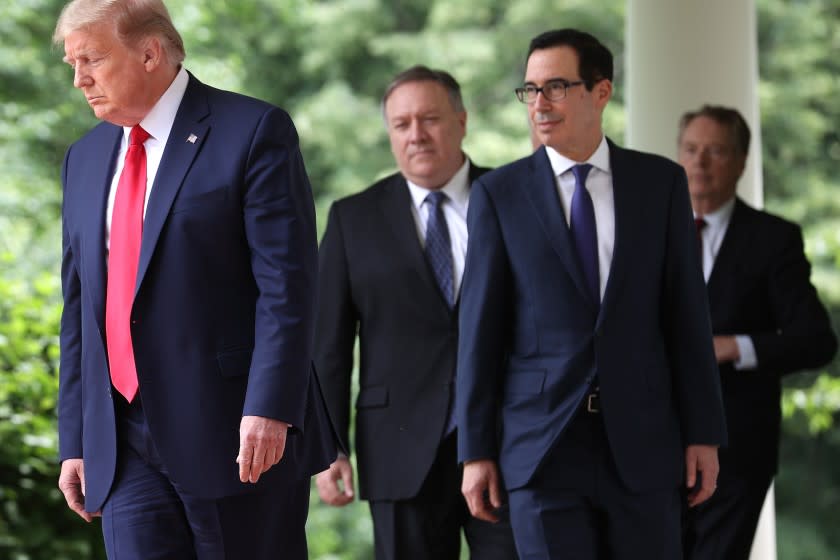 Fears are rising on both sides of the Pacific that the U.S. and China could be headed for a total breakdown of relations and even outright conflict within the next few months.

As the two powers ordered the closure of each other’s consulates in Houston and Chengdu last week amid allegations of espionage, Secretary of State Michael R. Pompeo called for the end of “engagement,” a policy that has defined U.S-China relations for nearly five decades — and is considered one of the Republican establishment’s most important foreign-policy achievements in recent history.

“We, the freedom-loving nations of the world, must induce China to change,” Pompeo said in a speech delivered Thursday at a pointedly chosen site, the Richard Nixon Presidential Library in Yorba Linda. Nixon was the first president to reach out to China, in 1972.

It is a dramatic shift in relations between the U.S. and China, which had for decades overcome fundamental differences between America’s capitalist democracy and China’s Leninist autocracy not only to coexist, but also to anchor the global economy and cooperate on critical issues including climate change and pandemic prevention.

That era appears to be over.

There is now a bipartisan consensus in the United States on the need for a tougher China policy. Even longtime China scholars and policymakers who have spent their lives building closer ties with China in the belief that such engagement would induce democratic reform have grown disillusioned.

At the same time, they say the Trump administration’s “sledgehammer” approach, which seems intent on starting another cold war and leaves no room for dialogue, is counterproductive and disingenuous in its purported concern for Chinese people. It is also dangerous and could lead to outright conflict, they say.

“There are ways to handle the relationship without blasting through it,” said Deborah Seligsohn, who served as a U.S. diplomat for more than two decades, mostly in Asia. “There are ways to weigh the pluses and minuses. It doesn’t have to be this antagonistic.”

President Trump’s China policy has repeatedly seesawed and has often appeared inconsistent or haphazard, with much bloviating on the trade gap and virtually no attention to human rights. According to former national security advisor John Bolton, Trump once begged Chinese President Xi Jinping for help in getting reelected and gave tacit approval to the concentration camps Xi was establishing to hold Muslim Uighurs. He called Xi a “good friend” for months into the global pandemic.

Now, as elections approach, he seems to have given the China hawks free rein.

In addition to the consulate shutdowns, the U.S. last week charged two Chinese nationals with hacking for Chinese intelligence agencies and arrested a Chinese researcher who had been hiding in the San Francisco consulate. She was part of a longstanding network of Chinese industrial spies spanning 25 cities, the U.S. Justice Department claimed.

For nearly half a century, U.S. officials, businesses and civil society have invested in and become increasingly intertwined with China, helping it recover from its Mao-era traumas and grow into the world’s second-largest economy.

That relationship began in 1972 when President Nixon surprised the world by traveling to longtime adversary China to seek cooperation as a balance against the Soviet Union. Formal diplomatic relations were established seven years later. Once the Soviet Union dissolved, however, the United States needed a new justification for “engagement,” said Orville Schell, director of the Asia Society’s Center on U.S.-China Relations.

“We had this idea: ‘There’s an inescapable, unavoidable course of history, and China will get on its right side. It will have to change,’ almost like Marxist determinism,” said Schell.

That hope was palpable especially in the 1980s, Schell said, a time when China was opening economically as well as politically, with a vibrant reform movement that included students, workers, and a wide cross-section of Chinese society. That movement was crushed in the Tiananmen Square Massacre of 1989.

At the same time, the economic reforms continued. And American corporations flocked to China, profiting off cheap Chinese labor, while policymakers told themselves political reform would be sure to eventually follow.

“This is the evangelical side of America,” Schell said. “We thought the persuasiveness of the American proposition would ineluctably change a country like China. … We had the internet, the market, you name it. We thought we’d get the knife in the oyster and open it right up.”

Meanwhile, China has moved up the supply chain and is angling to compete with the U.S. in high-tech fields including artificial intelligence and space travel — sometimes by cheating or stealing, according to U.S. officials.

Some Chinese observers say the expectation of changing the Communist Party system has always been a farce.

“It’s absurd,” said Wang Yong, professor of international studies at Peking University. “These Americans are overly self-confident and self-aggrandizing. They think they can change other countries — and as soon as it doesn’t fit their ideals, they change faces and want to suppress you.”

The Chinese government says U.S. hostilities are motivated primarily by insecurity toward China’s rise as a major world power and its challenging of U.S. hegemony.

“The current difficulties facing the Sino-U.S. relationship are single-handedly, entirely created by the U.S. side,” Chinese Foreign Minister Wang Yi said at a meeting with the German foreign minister on Friday. “Their goal is to disrupt China’s developmental progress, and they will take any measures to do so, without a bottom line.”

In his speech, Pompeo claimed the U.S. government was interested in helping the Chinese people, for whom America could be a “beacon of freedom” and who should be distinguished from the ruling Communist Party. But that is unconvincing to most Chinese audiences who have watched closely as Trump pushes an “America first” foreign policy and seeks to crack down on civil rights protests at home.

American soft power — the appeal of its institutions, society and culture — has long held enormous sway over Chinese society, Wang said. But it has deteriorated especially this year, with Trump’s failure to contain the coronavirus — which he blames on China in often racist terms — and ongoing exposure of racism and police brutality in the U.S.

“America is no longer the embodiment of an ideal political system in people’s hearts,” Wang said. As domestic unrest escalates in the United States, many Chinese observers usually amenable to the U.S. system have grown simultaneously disillusioned and afraid that the Trump administration will increase pressure on China as a distraction.

“Right now America is too chaotic and fragmented. They badly need a strategic enemy, like the Soviets or Japan in the past, to unite the domestic public,” he said. “China is the most convenient enemy.”

Yet Xi is also overreaching, said Susan Shirk, a former deputy assistant secretary of State and current chair of the 21st Century China Center at UC San Diego. Xi has virtually no restraints on his power, she said, and has fostered nationalism and his own strongman image to rally Chinese people amid economic troubles and the pandemic.

“Just in the last few weeks, he also is picking fights with everyone in the world,” said Shirk. “We have kind of unchecked, extreme behavior on the part of both leaders. It’s very dangerous.”

The usual way of defusing conflict would be for the two presidents to talk over the phone, as past U.S. presidents have done in times of crisis, Shirk said. But Trump and Xi have not spoken since March, U.S. officials say.

“Every day, we get another whack at China,” she said. It almost appears that the U.S. administration wants China to do something “really radical like breaking diplomatic relations,” she said, which would unwind more than four decades of painstaking diplomacy.

Short of a de-escalation between the two leaders, China could practice restraint and “just try to wait it out until the election,” Shirk said. A Biden administration might be less aggressive, or at least more rational, than Trump’s administration, she suggested.

Before November, either side could take intermediary albeit provocative steps, such as expelling diplomats or closing an embassy, a higher target than a consulate.

China could also pressure Trump economically. If Xi threatens to stop buying the soy beans that Trump brags he is selling to benefit American farmers, a key part of Trump’s voter base, the U.S. president might back down. Likewise, Trump may back down if he sees the stock markets drop, as major U.S. stock indexes did on Friday.

Or there could be a worst-case scenario, some Chinese and American experts now fear: The two countries could slide into direct military conflict even before the election.

“In Trump’s desperation to get reelected, he could precipitate a clash, a military clash,” Schell said.

“I am extremely worried about the arrogant inflexibility of China in the South China Sea,” he added, pointing also to Xi’s stances on Tibet, Xinjiang, Taiwan, and Hong Kong so far. To Xi, those are “core interests,” Schell said: “End of story. Shut up. No negotiation.”

Shirk said a complete breakdown, until now “unthinkable,” might be increasingly possible based on the current administration’s behavior.

“They’re willing to sacrifice American national security and global peace,” she said. “If it is an election strategy, they’re really playing with fire.”