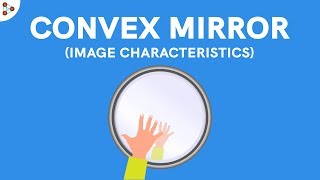 What is a mirror?

I Law: The angle of incidence of the light ray is equal to the angle of reflection.

II Law: The incident ray, reflected ray and the normal is in the same plane.

Some of the Important Terms Related to Image Formation of Mirror

Pole (P): It is the geometrical centre of the spherical surface of the mirror. It is usually represented by the letter P.

Centre of Curvature (C): The centre of the original sphere of which the spherical mirror is part is called the centre of curvature.

Radius of curvature(R): Radius of the sphere of which the spherical mirror is a part.

Principal Axis: It is the straight line passing through the pole and the centre of curvature.

Focal point: The point at which rays meet after reflection or the point from which diverging rays appear to proceed is called Focal point.

A convex mirror is also called the diverging mirror due to the fact that incident light originating from the same point will reflect off the mirror surface and it diverges. Ray diagrams are a useful tool in determining the image formation in convex mirror. The convex mirror only produces a virtual image. A virtual image is an image that cannot be obtained on a screen. The image is located behind the convex mirror, it is an upright image smaller than the actual object. There are two rules for reflection of light for a convex mirror.

I Law: The incident ray, normal and the refracted ray all lie in the same plane.