Is the Fisker Deal Good or Bad News for Nikola Stock? 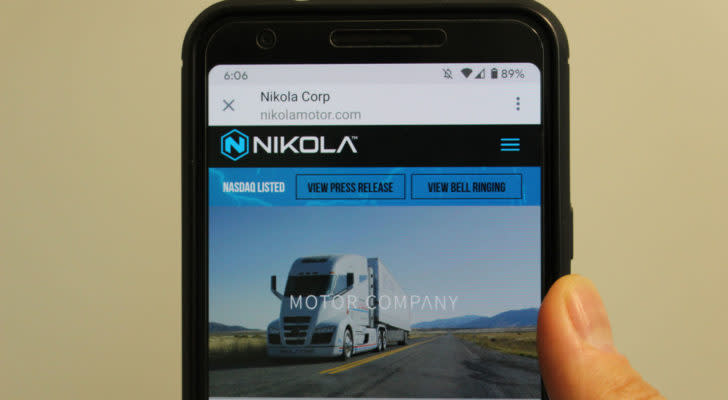 On July 13, Spartan Energy Acquisition Corp. (NASDAQ:SPAQ) announced that it would acquire Fisker, a Los Angeles-based startup electric vehicle maker, in a reverse merger that values the merged entity at $2.9 billion. Nikola (NASDAQ:NKLA) also went public through a reverse merger with a SPAC. Should this latest deal be interpreted as good or bad news for Nikola stock?

Here’s a look at both sides of the argument?

The Fisker Deal is Good News for Nikola Stock

Although Nikola stock has gone sideways since Fisker and Spartan announced their tie-up July 13, the deal confirms that electric SUVs and trucks are in demand from both consumers and investors alike.

“In electrification, we could have played in buses or trucks, but the car part is a very fast-growing market,” Geoffrey Strong, chief executive of Spartan told Reuters. “While there is room for several brands, we think that Fisker and Tesla will be at the forefront of the pure-play car and SUV segment of the EV market in the years ahead.”

Fisker intends to launch its Ocean SUV in late 2022.

It’s important to note that Fisker Automotive went bankrupt in 2013. This is former Austin Martin designer Henrik Fisker’s second go at manufacturing electric vehicles. Seven years on, electric vehicles have become much more mainstream, which suggests the odds of success for Fisker a second time around are much higher.

For Nikola, it means it has new competition for its Badger electric truck, which is also expected to enter production in 2022. Like Fisker, Nikola will partner with an existing automaker to produce its electric truck.

“There are three in the running right now for a joint venture on Badger, and we will announce who that is in the next few months,” CEO and founder Trevor Milton told Reuters recently.

Thankfully, for both companies, their respective vehicles aim to a different target audience, which means they won’t be competing directly against each other.

As I stated in June, Nikola’s got a shot to be the next Tesla, but a lot has to go right.

“There’s no doubt that Nikola is an intriguing business. I’ve been a fan of electric and Elon Musk for a long time. I would welcome anyone building upon Musk’s legacy as one of America’s great innovators,” I wrote on June 18.

“Ten years ago, Nikola wouldn’t have had a chance. Today, as long as it gets enough funding, the possibilities are real. Consumers want electric vehicles, and they want variety and choice. If  Nikola adds to the pool, I could see it sticking around.”

At the end of the day, the strong demand by investors for electric vehicle companies, is a look into the future of personal transportation.

Five years ago, I’m not sure one SPAC would have made an electric vehicle manufacturer a qualifying acquisition, let alone two. It’s the ultimate stamp of approval, which is excellent news for Nikola investors.

The Fisker Deal Illustrates How Hot SPAC’s Have Become

The SPAC movement kind of reminds me of the current trend of alcohol imbibers worshipping at the feet of White Claw, the seltzer-based alcoholic beverage that’s taken the nation by storm.

Everyone and their dog who’s got a little influence on Wall Street is launching one. Bill Ackman’s SPAC wants to raise $4 billion. By the time it closes, I wouldn’t be surprised if that dollar value is higher. They’re on fire.

Spartan Energy raised $480 million in gross proceeds in its August 2018 IPO. By SPAC rules it had 24 months to make a qualifying acquisition. While the deadline was fast approaching, I’m sure its shareholders would have extended the date due to the novel coronavirus.

However, it does illustrate why some SPAC acquisitions happen: The sponsors don’t want to end the game without acquiring a target. It’s the nature of the beast. Why bother raising all these millions if you’re not going to put them into play?

In Spartan Energy’s 2018 prospectus, it noted that its intended target was in the energy industry. That’s a relatively broad and diverse range of companies.

“Certain of the Apollo Funds have historically invested in companies in the energy industry, with opportunistic investments in the upstream, midstream and energy services sectors. Accordingly, we may pursue a target business in these sectors or any other sector within the energy industry,” the prospectus stated.

Well, we all know what happened to oil & gas.

So, somewhere in those 24 months, it decided to jump off the fossil fuel bandwagon and onto the renewable energy platform. That’s not an easy, nor a quick transition.

Henrik Fisker chose Apollo Global Management (NYSE:APO), the people behind Spartan Energy, after talking to several SPACs. Clearly, he used Spartan’s situation to his advantage. Other, newer funds, might have resisted making a deal at this point in the budding automaker’s development.

I wouldn’t pretend to know the inner workings of the SPAC industry, but between Spartan’s need to get a deal done, and much more significant, better-financed funds coming to market, it had to be thinking that it was now or never.

So, to a certain extent, I do feel the hotness of SPACs played a large part in this transaction getting done, rather than a focus on electric vehicles.

As I stated in June, I wouldn’t bet on Nikola stock, but I also wouldn’t short it.

To me, the Fisker deal would have gotten done with or without Spartan Energy. So, in this regard, I think it’s excellent news for Nikola shareholders.

What happens next is up to Nikola’s management.

Will Ashworth has written about investments full-time since 2008. Publications where he’s appeared include InvestorPlace, The Motley Fool Canada, Investopedia, Kiplinger, and several others in both the U.S. and Canada. He particularly enjoys creating model portfolios that stand the test of time. He lives in Halifax, Nova Scotia. At the time of this writing Will Ashworth did not hold a position in any of the aforementioned securities.

The post Is the Fisker Deal Good or Bad News for Nikola Stock? appeared first on InvestorPlace.