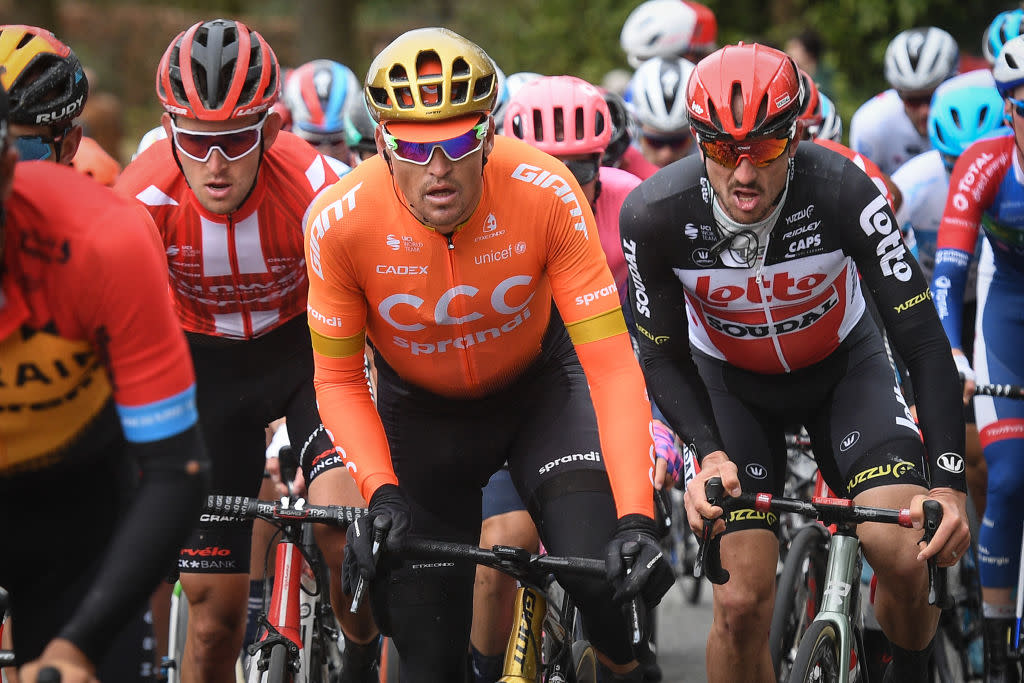 Israel Start-Up Nation team owner Sylvan Adams has admitted that there’s ‘interest’ in Classics specialist Greg Van Avermaet (CCC Team) after being asked by the Belgian media whether he was considering signing the Belgian. The Israeli team has already signed Chris Froome from Team Ineos for 2021, and taking on Van Avermaet would enable the team to compete with the very best on all fronts.

The 35-year-old winner of the 2017 Paris-Roubaix could become available if CCC Team manager Jim Ochowicz is unable to find a replacement title sponsor for CCC, who he confirmed last month would be ceasing backing of the men’s WorldTour team next season.

“I can’t say anything about that, but you expected that,” Adams told Sporza at the weekend when asked whether the rumours were true that he might be interested in signing Van Avermaet.

Having already signed Froome for the Grand Tours, signing Van Avermaet would allow the team to take on the likes of Deceuninck-QuickStep, Bora-Hansgrohe and Lotto Soudal in the Classics, too.

Sylvan Adams: We couldn’t have dreamt that Chris Froome would be available

Van Avermaet has already won Paris-Roubaix, Gent-Wevelgem and the Omloop Het Nieuwsblad, but the Tour of Flanders continues to elude the Olympic road race champion, who’s determined to improve upon his second places at Flanders in both 2014 and 2017.

“Greg is one of the best Classics riders ever, and certainly of his generation,” Adams said. “He can compete with Peter Sagan [Bora-Hansgrohe]. I have a lot of respect for Van Avermaet, and he will continue to win wherever he rides.

“Of course there is interest,” he said. “You’d have to be interested in such a rider. But I can neither confirm nor deny the rumours.”

Van Avermaet would also be able to provide experience and support to Froome during the Tour de France, too, where the Belgian held the leader’s yellow jersey for over a week during the 2018 race, as well as for a few days in 2016.

On trying to win the Tour de France with Froome

In an interview with Cyclingnews on Saturday, Adams said on signing Froome: “We couldn’t have dreamt that Chris Froome would be available.”

In his interview with Sporza at the weekend, Adams said that there was huge interest in Israel following the news that the team had signed the British four-time Tour de France winner.

“It was on the front page of the papers,” he said. “It’s like Cristiano Ronaldo having signed for the local football team. Cycling is not the most popular sport in this country, but it is definitely starting to grow here.”

Israel Start-Up Nation will ride the Tour de France for the first time this summer, and while they already have the very capable Daniel Martin, the Irishman may not be able to take on the might of Team Ineos and Jumbo-Visma when it comes to the overall title in Paris.

Signing Froome for 2021, however, should ensure that Adams and his team will be able to target Tour victory next year.

“Winning the Tour is not a dream, because that sounds like it wouldn’t be achievable,” said Adams. “It is our goal – an achievable goal.

“If Froome wins again, he’ll have the magical five victories at the Tour. With a sixth win, he would break the record,” he said.

“He could even come close to the mythical 11 victories in Grand Tours achieved by Eddy Merckx,” added Adams, with Froome’s tally already numbering seven, having also won the Vuelta a España twice and the Giro d’Italia once. “And then we’d have to reconsider who was the greatest rider of all time. Sorry, Belgium.”