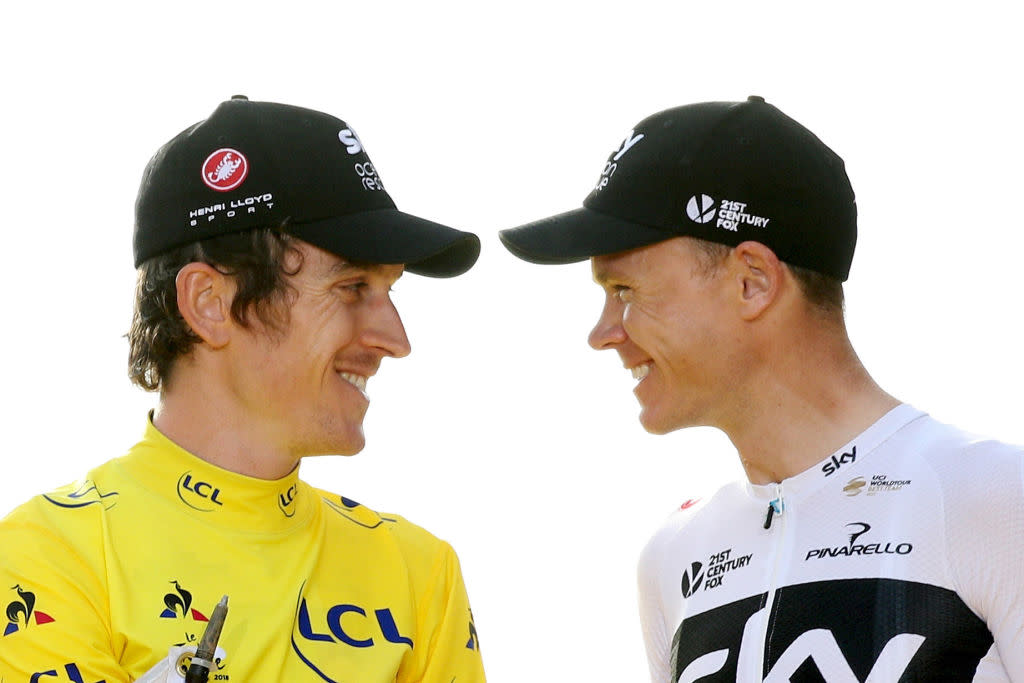 Geraint Thomas has publicly reacted to news of Chris Froome’s transfer to Israel-Start-Up Nation, saying his teammate will find it “weird” in his new surroundings.

Thomas, currently at a Team Ineos training camp on Mount Teide, was speaking on the Watts Occuring podcast he hosts with Luke Rowe, who suggested Froome will be taking a “step back” at Israel Start-Up Nation.

Thomas has raced alongside Froome since their Barloworld days in 2008, while Rowe joined the pair at Team Sky in 2012, but it was announced last week that the four-time Tour de France champion will move on in 2021.

Rowe said it’d be “weird” to race against Froome, but Thomas argued it’d be more so for Froome, moving to a new team that itself is new to the WorldTour.

Guimard: Chris Froome is the gunpowder that could spark Ineos explosion at Tour de France

“It will be weird for him, though, as well, I think – more weird, suddenly [being] in a different environment. Phwoah, it’ll be some change, that,” Thomas said.

“It’s a massive change, isn’t it,” Rowe added. “There are a lot of things here that we have so dialled that, being honest, he’ll be taking a step back on a lot of things, going to that team. But then you see a lot of riders step up because they’re in a new environment with a new challenge.”

In announcing Froome’s departure, Team Ineos stated that they could not guarantee him the leadership role he’s enjoyed in the past. In Thomas and Egan Bernal, they have the past two winners of the Tour, while they also signed Giro d’Italia champion Richard Carapaz and are developing 23-year-old Pavel Sivakov.

“Speaking openly, I can see there’s a number of leaders now – him, yourself, Egan, you’ve got Carapaz and Pavel coming through, young guys,” Rowe noted. “Here, you all forever have to fight for your leadership, but he’s going to go there, he’s going to be top dog, no discussion.”

“Is that why he left? I thought it was the money,” Thomas deadpanned, before agreeing with Rowe that Froome seems ‘as hungry as ever’.

“He’s done incredibly well just to get back to the shape he’s in now, after that accident,” he said, referring to the career-threatening injuries Froome sustained last June.

Thomas, Rowe, and Froome are currently on Teide in Tenerife on an altitude camp alongside six of the other riders on the long list for the Tour de France: Sivakov, Michal Kwiatkowski, Andrey Amador, Tao Geoghegan Hart, Dylan van Baarle, and Jonathan Castroviejo.

The only exception is Bernal, who’s still in his native Colombia awaiting a charter flight to Europe this weekend.

“It’s nice to be back in that team environment. You can focus 100 per cent on just training, and obviously training is better in a group. It just gets that bit more out of you,” Thomas said.

“In lockdown I was doing efforts and just going through the motions, but here there’s that competitiveness. We’re all bike racers, basically.”

Rowe added: “It’s not a competitive group, but obviously there’s that level of… let’s face facts, there are 10 people and eight will go to the Tour, and there are three leaders. There’s that edge of competitiveness. It’s good, it’s not boiling over; you just drag each other out a bit.”

Outlining plans for a team-based effort to round out Friday’s session, Rowe asked Thomas if he and Froome were going to go ‘mano a mano’ in a bid to stamp their authority over one another.