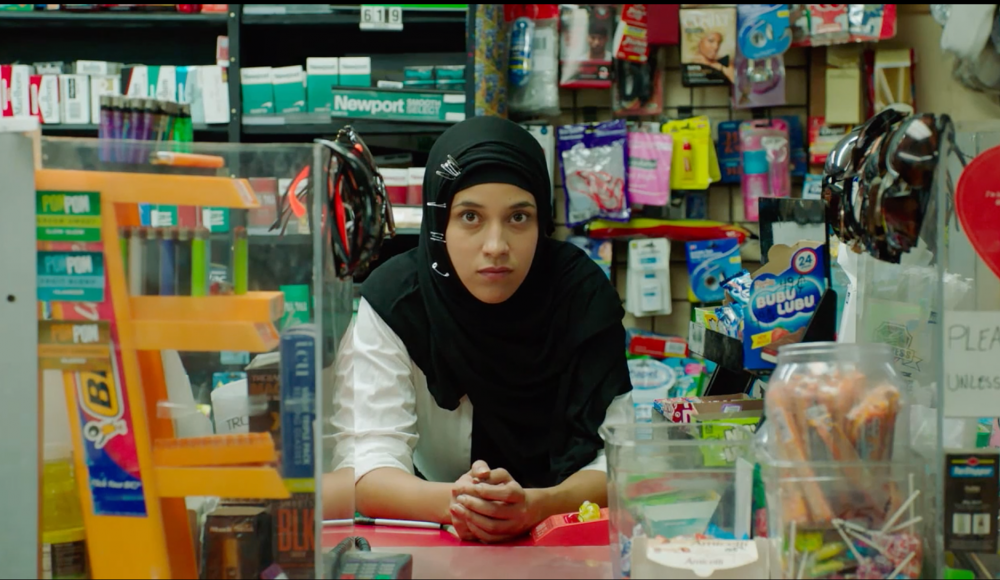 “I’ve never been to Lebanon,” Lebanese-American high-schooler Marjoun (Veracity Butcher) tells us in voiceover. “Just here: Arkansas.” There’s the slightest uninflected irony in her delivery of that last word, suggesting that her story will archly observe the conundrum of many a second-generation immigrant: belonging to a place that often fails to recognize you as one of its own. But over the course of the thematically ambitious but dramatically uneven “Marjoun and the Flying Headscarf,” from director Susan Youssef (“Habibi”) that paradox emerges as only one of many — too many — contradictions and complexities that beset our (eventually) hijabi heroine.

In good and bad ways, “Marjoun” bears the hallmarks of its 15-year gestation and its expansion from Youssef’s short film of the same name. It is both over- and under-worked, bristling with ideas and issues and subplots that have but little connective tissue holding them together. It’s almost as though writer-director Youssef has grown so much into the story in the intervening years that she takes for granted much that is not manifest to the outside viewer.

Ethnic identity challenges are very far from all that Marjoun has on her plate. Her beloved father Aabid (Tarek Bishara) is in prison, awaiting trial on terrorism charges due to the misinterpretation of several large transfers he made to relatives at home in Lebanon. She has a frosty relationship with her mother Amani (Clara Khoury), who since her husband’s arrest has been self-medicating heavily and depression-sleeping in the afternoons. And her eccentric little sister Jinane (a performance of engaging self-possession by Maram Aljahmi) with her neat hijab and habit of making model animals out of tinfoil, is being bullied at school. Jinane “covered” — i.e. donned a headscarf — the year before because “like all the girls at mosque school,” as Marjoun says acerbically, her own hair long and loose around her shoulders, “she couldn’t wait.”

They’re struggling to maintain their small convenience store, so Amani invites family friend Sami (Dominic Rains), an apparently successful TV actor with an insinuating smirk and a Danny Zucco quiff, to stay with them and help out, leading her mother to accuse her of “living like a whore.” “Sami has never looked at me!” huffs Amani indignantly, but it soon becomes clear that it is Marjoun, not her mother, that Sami is looking at. And not just looking at, but creeping on, groping and, under cover of a perplexing sudden cut to black, probably much worse.

Between the institutional anti-Arab bias Aabid faces (the film is set in 2006, in the early years of the Patriot Act), the complacency of suburban America, the clash between traditional values and progressive ideals within the Muslim faith, the linguistic and cultural tensions between Marjoun’s Americanness and her Lebanese heritage, not to mention ongoing child abuse, coming-of-age pains and a late-breaking appearance by some saintly Buddhist trainee monks, there’s enough dramatic energy here to power a small village. Yet the stakes are hamstrung by the film’s peculiar stop-start pacing, and by a notable lack of mother-daughter chemistry between Amani and Marjoun, who have to convey much of the emotional exposition in a series of never-wholly-convincing domestic arguments.

Menno Cruijsen’s electro synth score does give a stylish modern edge to DP Hans Bouma’s constrained camerawork, which only occasionally is let off the leash. A recurring shot of the back of a classmate’s neck, stippled with stubble beneath his neatly razored hairline, is a nice shorthand for Marjoun’s crush on him. And the slightly synthetic quality of the images does make subtle fun of the blandly pink rooftops and vivid green lawns of suburban Little Rock. But when so much of the film takes place in interior shot-reverse-shot dialogue scenes, that artificiality quickly becomes airless, even a little soap operatic.

Perhaps the main issue is that Marjoun’s own characterization is far from consistent. So when she finally does put on the eponymous headscarf, giving it a punkish flourish with a series of safety pins down one side, we can’t be sure if it’s an act of rebellion or submission. Is it a pugnacious f— you to her whitebread Arkansas contemporaries (“What, should I dress like a slut like you?” she hisses unnecessarily at one classmate)? Or is it a tacit admission that her best protection from Sami, and from the wide world of abusive and exploitative men, is to change her appearance and modify her behavior into the semblance of a demure modesty she does not actually feel?

The provocative politics behind the symbolism of the Muslim headscarf is such that it’s possible we are meant to somehow read both celebration and criticism into the gesture. But the film, though it does sometimes land a sharp insight or a deeply felt detail, has too many ellipses and omissions to be sure of that or anything: like Marjoun herself, its heart is difficult to know.