Mass Transit Is the Way to Get Cities Moving Again 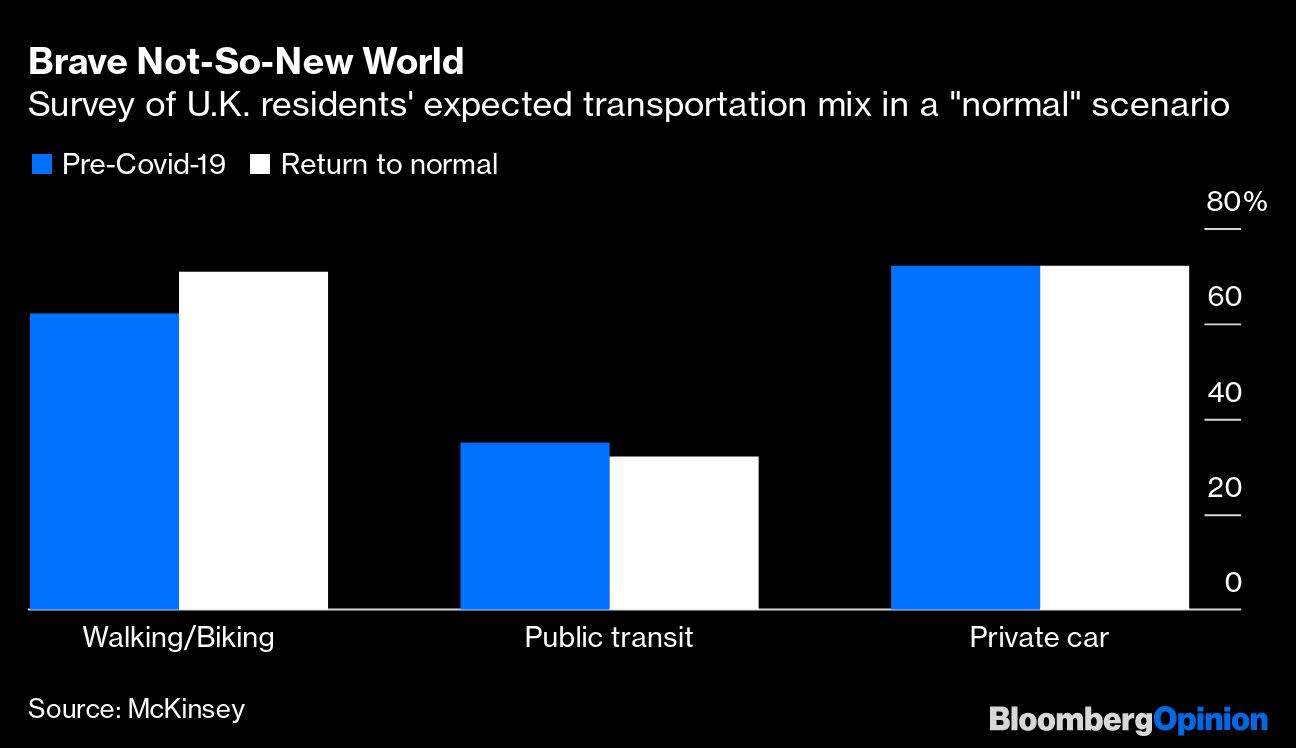 (Bloomberg Opinion) — As the coronavirus pandemic continues, Bloomberg Opinion will be running a series of features by our columnists that consider the long-term consequences of the crisis. This column is part of a package on the future of transportation.

History is littered with radical forecasts about what the future of 21st-century urban transit might bring. Isaac Asimov’s short stories promised us sentient self-driving cars, “Back to the Future” imagined hover-boards, and “The Jetsons” predicted jet-packs. It turns out the transportation challenge facing the world’s mega-cities in 2020 looks rather more prosaic: How to help people resume their normal commutes without risking an uncontrolled Covid-19 flare-up or a return to congested, polluted streets.

The goal isn’t impossible, even if it seems elusive right now. Cities, which have bounced back from plagues, famine and wars, are unlikely to wither and fade as a result of this crisis. And public transit — however unclean, scary and cramped it looks today — is critical to getting them moving again.

The crisis presents urban planners with potential opportunities. The lockdown has witnessed a surge in eco-friendly mobility policies like bike lanes, scooter rentals and pedestrianized plazas, which may well prove more than fleeting trends. Such innovations will reduce congestion and make urban spaces more liveable. But the cities that flourish in the post-Covid era will be those that invest in improving the infrastructure that already exists.

Even in cities that have managed to contain the virus, daily life remains trapped in a kind of halfway world between the medieval, home-bound existence of lockdown and the distant dream of normalcy. Fears of infection, coupled with government guidelines on social distancing and the wearing of face masks, are conditioning how people move. Public health and cleanliness are the top criteria when it comes to choosing a mode of transportation in the current environment, according to a survey by Boston Consulting Group.

Many people remain either unwilling or unable to clamber onto subways or buses as before. Public transit use is running at half its normal, pre-Covid-19 rate, according to Moovit data and Bloomberg Intelligence. This shunning of public transport is, predictably, leading to a rebound in private mobility — like the dreaded car. City traffic data tracked by TomTom shows current peak congestion in China, Germany, Russia and France close to or even higher than last year’s levels.

That’s spurred a counter-reaction from car skeptics. Cities from Berlin to Lisbon have rolled out almost 1,500 kilometers of new bicycle lanes, according to the European Cyclists’ Federation, often using the tools of tactical urbanism — painting lines on roads. Restaurants and cafes, eager to make up for lost business during lockdown, are covering up parking spaces with outdoor dining tables and chairs. What New York City’s former transportation commissioner Janette Sadik-Khan called a “streetfight,” the politically-heated quest to make mega-cities liveable, is intensifying. In some cases, it’s possible “Two wheels good, four wheels bad” could win out, and maybe that wouldn’t be such a bad thing.

But the new world will probably look more like the old world than we think. Past examples of urban shocks seen this millennium, from 9/11 to SARS, suggest transportation habits in cities are sticky and resilient. Research by Graham Currie, chair of public transport at Monash University in Melbourne, finds that following historical events, disruptions in public transit demand tend to last between a few weeks to two years. And surveys show people’s future transportation plans in a “normal” scenario look remarkably similar to how they moved pre-Covid.

Some lifestyle changes are probably inevitable, whether it’s more remote work or increased interest in the suburbs, but they’ll likely happen at the margins. More than half the world’s population live in cities, which concentrate people, jobs, ideas, commerce, entertainment and power. They won’t be easily cast aside.

So don’t be surprised if transportation demand returns to pre-virus levels soon. Assuming social-distancing rules remain in place, transportation systems will have to contend with a space crunch. Currie gives the example of Melbourne, where commuters make about 385,000 trips into the city every morning, 220,000 of them on public transport. If rail, tram and bus services can only take about 10% to 15% of the usual trips, that leaves 198,000 commuters looking for alternatives.

Other modes of transport have limitations: Cars won’t be as effective in a city of congested streets and fewer parking spots, while bicycles and electric scooters have a way to go before they become dominant modes of transport in cities outside Denmark and the Netherlands. Road safety fears, and our aging populations, don’t help matters.

Instead of letting public transit wither on the vine, cities should focus on ways to help it survive and adapt. That means delivering an experience that’s more pleasant and more sanitary than the crowded subways and buses of the pre-virus days, without going down the extreme or unaffordable route of ripping out 50% of seats. For light rail or underground trains, no revolution would be necessary: Regular cleaning, materials that are less friendly to germs, and flexible fares to encourage more travel outside of rush hour would help.

Bigger changes should happen at street level, though. Space that’s taken away from private vehicles should be given to buses, not just bikes. Buses can carry large groups of people in a cost-efficient and energy-efficient manner, especially with cities investing in a shift to electric vehicles. They deserve priority, if not exclusivity.

The movement to slow our cities down has merits also, and city-dwellers understandably want to keep the few upsides of those long lockdown months: clear skies, breathable air, and walkable streets. Pedestrian plazas and permanent bike lanes could be expanded as part of a mixed approach similar to China’s, where bike-sharing schemes and walking are encouraged to feed into rail transit.

But public transportation needs to be kept at the heart of urban planning. Until cities like Paris and Milan deliver on the promise of a “15-minute city” — where residents are offered a full array of services like education, employment and healthcare within a 15-minute walk — people will need to make long cross-town journeys on a daily basis for years to come. Remote work is a luxury for the time being, and self-driving cars are nowhere near their science-fiction potential. Public transit is less exciting than jet-packs, but it works — and it’s the key to a cleaner, greener future.

Lionel Laurent is a Bloomberg Opinion columnist covering Brussels. He previously worked at Reuters and Forbes.