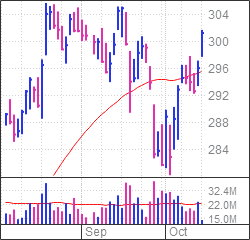 Microsoft (MSFT) is the IBD Stock Of The Day as the software giant rolls out its Windows 11 PC operating system and bolsters its cloud computing offerings. Microsoft stock is approaching a formal buy point.

Over the past two months, Microsoft stock has formed a flat base with a buy point of 305.94, according to IBD MarketSmith charts. It came close to that buy point on Sept. 15 when it climbed as high as 305.32. But then Microsoft stock dropped in the subsequent market correction.

Aggressive investors could have used the stock’s move above its 50-day moving average line on Thursday as an early entry point. That was near 295.30. But with the market still in correction, caution is warranted.

In a positive sign, the relative strength line for Microsoft stock is near record high territory.

“It’s almost become a defensive, safety-blanket name in periods of volatility across tech,” he told IBD.

The next major catalyst for Microsoft stock could be the company’s fiscal first-quarter earnings report. The Redmond, Wash.-based company plan to report its September-quarter results on Oct. 26.

Meanwhile, Microsoft has been active on the product front.

On Oct. 5, Microsoft began the rollout of its Windows 11 PC operating system. Windows 11 is the successor to Windows 10, which came out in July 2015. The new software features a refreshed design and provides PC performance improvements.

Windows 11 could even give a boost to sales this holiday season, analysts say. “There are some cross-sell opportunities around cloud services,” such as Office 365, Ives said.

On Sept. 28, Microsoft announced Azure Purview, a unified data governance solution. Azure Purview aims to give organization a complete understanding of their data regardless of whether it’s stored on-premises in services like SQL Server and Oracle, in different clouds like Amazon Web Services S3, or in software-as-a-service applications like Salesforce.

On Nov. 1, the company will release its Microsoft Cloud for Financial Services to general availability. The software suite is purpose-built for financial services companies. It is Microsoft’s latest industry-focused cloud offering. It also has Microsoft Cloud offerings for retail, health care, manufacturing and nonprofits.

In other news, Morgan Stanley reported last week that Microsoft scored well in a survey of spending plans by corporate chief information officers. The investment bank rates Microsoft stock as overweight, or buy, with a price target of 331.

Microsoft stock ranks first out of eight stocks in IBD’s Computer Software-Desktop industry group, according to IBD Stock Checkup. It has an IBD Composite Rating of 95 out of 99. IBD’s Composite Rating combines five separate proprietary ratings into one easy-to-use rating.

Microsoft stock is on IBD’s Leaderboard list and in the IBD Long-Term Leaders Portfolio.

See Stocks On The List Of Leaders Near A Buy Point