NBA players’ activism is not new but shaping change would be 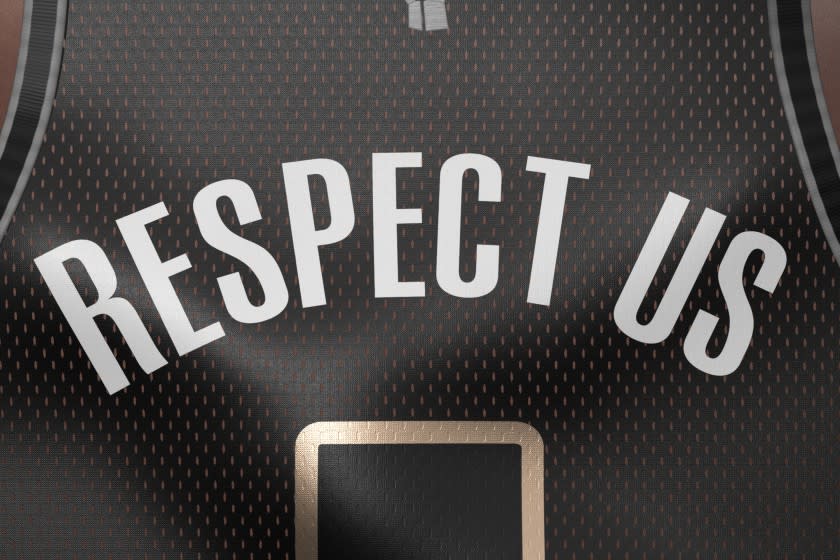 This is the conversation in America. And from a dimly lit hallway at a game that no fans attended in Orlando, Fla., this is a LeBron James news conference.

The NBA is on the doorstep of its return to play during a global pandemic and the most sustained social reform movement since the 1960s causing people and industries to reckon with racist history.

Sports will not be a distraction — the participants say they won’t let it happen. Every opportunity to speak is a chance to sermonize. With a country starved for sports and a group of basketball players, 75% Black, desperate to see change while sequestered together in Orlando, the most unique season in league history could be its most important.

Whether the opportunity can be sustained and effect change? That’s still unknown.

“I guess we’ll see,” said Dr. Todd Boyd, a professor of critical studies at USC. “Part of me, I’ve been observing this for a very long time. … I can appreciate the urgency of the moment. My question is when this is no longer the top story in the news, will people still be paying as much attention to it?”

NBA players are committed to wresting control of the narrative.

The Times has learned that players plan to kneel during the national anthem Thursday, the league’s opening night doubleheader that concludes with the Clippers playing the Lakers. When it happens, the players, many of whom will have special messaging on the back of their uniforms, will continue to bring up social injustice, largely using the name of Breonna Taylor.

“Having a group of people, the more people you have, the bigger the voice, I think, the bigger the impact you can have on whoever is watching,” Clippers star Kawhi Leonard said.

Despite claims that sports exist as an escape from the woes of the real world, that has not been the NBA’s legacy. Since players like Earl Lloyd, Chuck Cooper, Harold Hunter and Nat Clifton became the league’s first Black players 70 years ago, they have been active participants in the drive for change.

Legends like Elgin Baylor boycotted games because of segregated hotels. Stars like Bill Russell and Kareem Abdul-Jabbar marched in protest and mourned in public after Dr. Martin Luther King Jr. was murdered. Others fought for better working conditions and pensions. Later, players would be prominent figures in the fights against gun violence and police brutality.

Even in times when social action wasn’t as prevalent or publicized, basketball players had fingerprints on key issues. NBA star Alex English starred in a movie, “Amazing Grace and Chuck,” that took on nuclear armament. Magic Johnson became one of the faces in the fight against HIV-AIDS.

In the WNBA, players have led in the fights for equality as well.

But the actions of NBA players weren’t always celebrated.

When Detroit Pistons star Isiah Thomas joked about the largely white media’s treatment of Celtics star Larry Bird after losing to Boston, it did significant damage to his reputation, Boyd said.

Bulls guard Craig Hodges wore a dashiki to the White House and handed President George H.W. Bush a letter detailing problems in Black communities. He never played again in the NBA. Hodges claimed in a lawsuit that he was blackballed because of his activism. The case would be dismissed because it was filed after the statute of limitations expired.

In 1996, Mahmoud Abdul-Rauf was suspended by the league for one game after refusing to stand for the playing of the national anthem, saying the song and the flag represented “tyranny.” Following his suspension, he would stand for the song, looking down while praying into his hands. After his protest, he received death threats and was the subject of widespread scorn.

Rasheed Wallace’s criticism of Commissioner David Stern and the league’s reliance on young players in 2003 was hardly met with applause. NBA legend Bill Walton penned a column calling Wallace an “idiot” who made “despicable” comments.

While the league has generally been supportive of its players’ activism, the introduction of a dress code in 2005 was viewed by some Black players as oppressive.

In the last decade, though, the NBA and its players and coaches have been more aggressive in fighting injustice.

In 2010, reacting to new immigration laws in Arizona, the Phoenix Suns wore “Los Suns” jerseys in protest. Their general manager at the time, Steve Kerr, and the coach of the opposing team, Gregg Popovich, have become two of the league’s most outspoken critics of President Trump’s policies. In 2014, Brooklyn signed Jason Collins, making him the league’s first openly gay player.

A group of NBA stars led by James, Carmelo Anthony, Chris Paul and Dwyane Wade helped drive a new wave of activism. From social media posts to a show-opening speech at the 2016 ESPY Awards show, the group of friends set the tone for NBA players to speak out.

“Athletes need to use their voices,” Milwaukee forward Kyle Korver said, pointing to the ESPYs. “I think it was the start of athletes embracing this and understanding. I think there’s been some push-back on athletes, that we need to separate, keep politics out of sports. There’s been some push-back about if what we put on the back of our jersey can really create any change. We need politicians and policymakers to create that kind of systemic change.

“But we do have a voice in culture. If you poll the youth, who they’re listening to are entertainers and athletes. And I think athletes aren’t just running their mouths. I think guys are really trying to educate themselves, connect to people who are educating them.”

Anthony said the ESPYs speech was a call to action for fellow athletes to speak out against issues such as gun violence, police brutality and whatever else matters to them.

“I don’t want to use the word ‘demand’ but we did demand guys to step up to the plate and use their voices and use their platforms,” Anthony said. “I think that’s what you’re seeing now, guys, athletes in particular, are feeling more comfortable with using their voice and using their platform, being able to be allowed to say what they have to say, say what they feel and be human at the end of the day.

“For so long, as athletes, we were afraid to be human.”

In Orlando, humanity is in the foreground.

Players have access to curated reading lists and Black cinema through the league’s campus smartphone app. There are also links to online lectures, classes and organizations. Teams like the Memphis Grizzles are holding movie nights and roundtable discussions.

“I feel like us, having those platforms that we have, we should always speak up to do the right thing,” Memphis rookie Ja Morant said. “I feel like every player has a voice that will definitely be heard. So they should speak up. … We have some players leading the charge with bigger platforms than mine that are also speaking up and going about things the right way.”

This is not just about the stars. A new wave of activists is being taught how to use their voice and, more importantly, their influence to make changes.

“That’s the next step — guys identifying what they want to be a part of the change of and then using their platforms to create action items and going and doing those things,” said Morant’s veteran teammate Anthony Tolliver. “We’re trying to be proactive, create different avenues to be able to continue conversations, to continue to educate guys on different issues, provide different things that we can read or things we can watch … just continue to help guys identify what their mission is. I think there are a lot of guys here that want to do something.

“For us in leadership, especially in the NBPA [players union], it’s up to us to continue to expose different things to people. And as they come across it, hopefully something’s going to click. And they go attack it and do what they can to help out in that area.”

“I don’t think it’s a matter of people being willing [to hear us],” Oklahoma City guard and union president Chris Paul said. “It’s about us being forceful. That’s the power we show as players, making sure everyone hears our voice.”