‘Our voices have been ignored’ 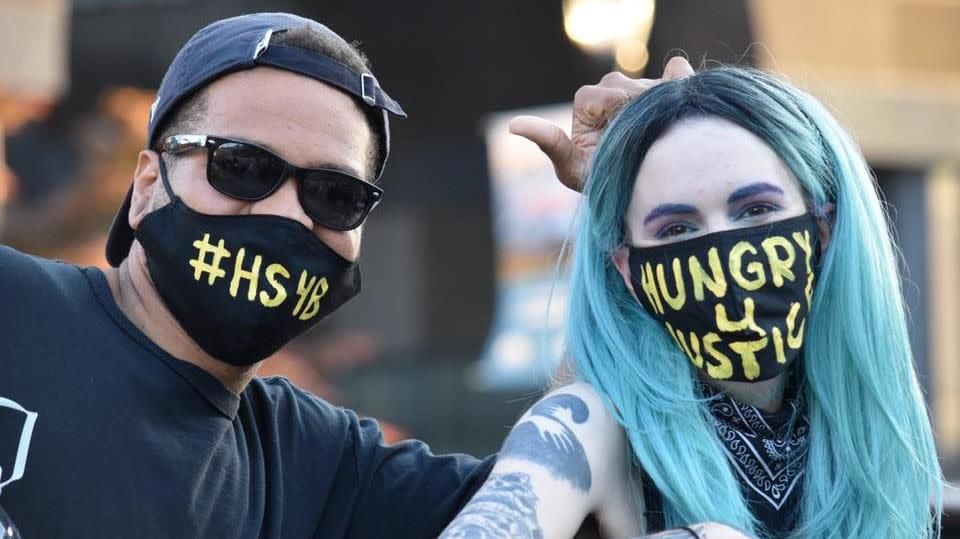 Since the March death of Black medical worker Breonna Taylor by Louisville, Ky., police officers executing a “no-knock” search in a drug investigation, national protests demanding justice for the 26-year-old continue. Now, four people have initiated a hunger strike to bring attention to Taylor’s case, and to call for the officers involved to be fired.

“Our concerns have been ignored,” Ari Maybe, 33, a grassroots activist and a member of Hunger Strikers for Breonna, tells Yahoo Life. “Our voices have been ignored. And so we have to stand up and make a difference. And that requires extreme measures.”

Maybe, along with Amira Bryant, Vincent Gonzalez and Tabin Ibershoff have entered the second week of their protest, which they will continue, they say, until Jonathan Mattingly, Brett Hankison and Myles Cosgrove are stripped of their pensions and fired from the Louisville Metro Police Department (Hankison was fired in June for violating the department’s use of deadly force). On March 13, the officers, who suspected that drug dealers had received packages at Taylor’s home, banged on her door and entered. Taylor’s boyfriend, Kenneth Walker, a registered gun owner, fired at the officers, who retaliated, striking and killing Taylor. According to the Louisville Courier Journal, no drugs were found in the home.

The group, which began the hunger strike on July 20, is abstaining from caloric intake — with the exception of water infused with lemon juice, salt and vitamin B, green tea and coffee — until their demands are met, live streaming their effort on Facebook from a home in Louisville. (The location is being kept private for security reasons.)

“The more people saw the inhumane details of what occurred that night, that pretty much mobilized myself and others,” Gonzalez, 33, who is a social worker, tells Yahoo Life. The hunger strike is how they choose to control the narrative. “And we were willing to put our bodies on the line to do that — enough has happened on the backs of Black bodies,” says Maybe.

The participants were cleared beforehand by their doctors. They are receiving care during the hunger strike from local medical professionals as well as mental health professionals. The group, which engages in guided meditation to overcome physical discomfort, spends its time strategizing and giving media interviews. Last week, they joined a local protest, riding in a truck to avoid expending calories. And they’re organizing a letter-writing campaign to city officials. The four have requested that people follow their live stream and make financial contributions toward medical supplies.

The cause is worth any pain, says Maybe. “Yes, I’m hungry, but I’m not lying on the floor dying. … I don’t have the people that are supposed to protect me — that just shot me — standing over there, ignoring me while I lay on the floor dying. So compared to what Breonna went through, me being hungry for a few days or a week or two weeks or 60 days, I don’t care. That is of no concern to me.”

Walker said that Taylor lay alive for five minutes as he yelled for help, however, the Jefferson County coroner said she died within a minute of getting shot, the Louisville Courier Journal reported.

Hunger strikes have been utilized throughout world history, according to Tracey Deutsch, a gender historian and food studies scholar at the University of Minnesota. “Some of the oldest examples are from pre-Christian Ireland, when people in debt would sit on the doorsteps of their creditors and refuse to eat until their dues were relented,” she tells Yahoo Life. “Historically, these strikes were to shame people in power.”

Deutsch sees the nonviolent protest as an effective means to achieve social justice. “It brings attention to a moral cause and suggests that business as usual is intolerable,” she adds. “That a system is so corrupt, it can result in death.”

Some of these strikes have been successful. In 1909, a jailed British suffragette named Marion Wallace-Dunlop vowed to only consume “my determination” after being charged as a criminal prisoner (and not a political one) for damaging a Parliament building, according to a recap from the Museum of London. After 91 days, authorities feared her death so they set Wallace-Dunlop free. And in 2013, California state inmates ended a two-month hunger strike to protest solitary confinement after lawmakers agreed to public hearings on the matter, reported the New York Times.

During the first few days of a fast, the body feeds off glucose (a simple sugar from carbohydrates that’s stored in the liver) for energy, Morgan Denhard, a dietitian at the Johns Hopkins Children’s Center, tells Yahoo Life. After the glucose is depleted, the body turns toward fat for survival and that process could last for weeks, depending on body composition. However, when fat reserves dwindle, muscles break down, leaving the body vulnerable to infection and death.

The ability to survive a hunger strike depends on a person’s physiology and whether or not they stay hydrated, says Denhard. “Without food, a person might last for a few weeks or a small number of months,” she tells Yahoo Life. “Without water, it’s a matter of days.”

The protesters are determined.

“Some of us are willing to go as long as it takes and do whatever it takes,” Maybe tells Yahoo Life.

“Breonna Taylor was one of us,” adds Gonzalez. “She had thoughts, hopes, dreams and desires, and the state took that away from her, through their actions, through racial injustice. … We will never forget what they did to her and all of the other Breonna Taylors of this world.”