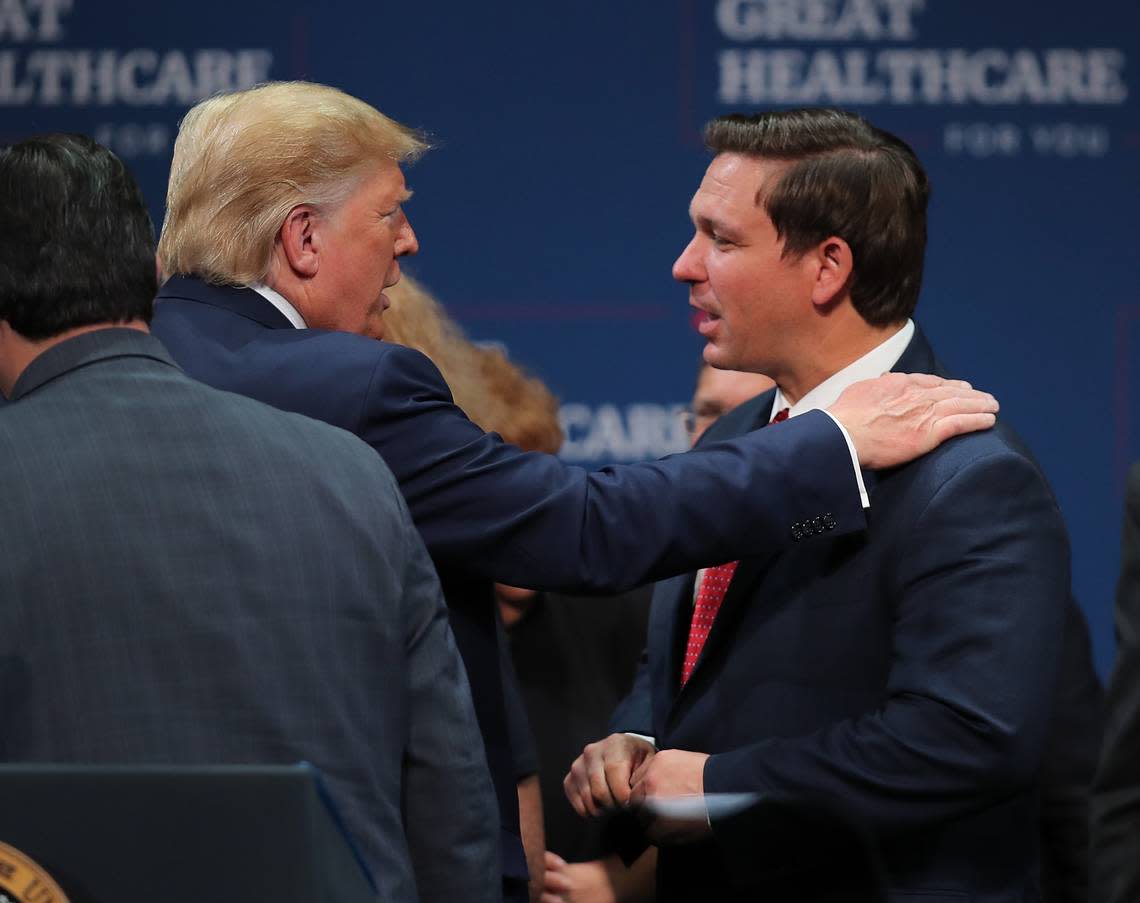 It’s Monday, July 27, and time to put a trail marker down to remember last week. That was the one where President Donald Trump made a remarkable about face and advocated wearing a mask, watched pretty much every poll show him behind Democratic rival Joe Biden, pointed to Florida as in a “big tough position” because of the coronavirus, and canceled the frantic plan to convene the Republican National Convention in Jacksonville, acknowledging “the timing of the event is not right.”

Duval County Sheriff Mike Williams, a Republican, set the tone with an announcement Monday that the virus had pushed the prospect of policing the convention “past the point of no return.” The president echoed it when he blamed what he called “the flare up” in Florida for the canceled event.

White House welcome: It means Gov. Ron DeSantis won’t get the chance to use his home state to command the spotlight and introduce himself to a national audience. But there don’t appear to be hard feelings with the president, even though it was a week in which Florida posted record COVID-19 deaths and surpassed New York in total cases.

DeSantis was back at the White House on Friday, appearing with the president as he signed an executive order allowing Florida to start obtaining prescription drugs from other countries.

Stinging drop: A new poll released by Quinnipiac University last week showed that most Florida voters now disapprove of the way the governor is handling the coronavirus outbreak. The poll registered DeSantis’ favorability rating at a new low, with 41% of voters approving of his job performance and 52% disapproving. The numbers reflect a 31-point drop in the governor’s approval rating from a similar poll in late April. Florida voters also said they believe the spread of coronavirus is “out of control,” and that the same percentage support mandates to wear masks in public.

Will the president’s about-face follow with a mandate for facial coverings — an order that DeSantis has resisted? If it was going to happen, perhaps we would have seen it by now.

WHAT WE’RE TALKING ABOUT

Credibility in crisis: The governor’s credibility in handling the crisis has been marred by the absence of transparency in dealing with the facts. When asked last week whether Congress should extend the federal unemployment benefit due to expire July 25, DeSantis avoided answering the question. “I haven’t been following what they’re doing,” he said.

The governor even quibbled with how the mounting number of COVID-19 deaths are being calculated and, as researchers explained to the Herald, the state’s failure to publicly report the data is interfering with attempts by researchers and public health officials to navigate the response.

Data shielding continues: The Agency for Health Care Administration collects reams of data on Florida hospitalizations for COVID-19, including how many patients are suspected to have the disease but haven’t yet tested positive. It’s all a paubalic record but the state won’t report any of it publicly.

Elders in jeopardy: For the last three months, DeSantis and AHCA Secretary Mary Mayhew have declared that their handling of the coronavirus in nursing homes and assisted living facilities was among their proudest achievements.

The federal Centers for Medicare & Medicaid Services on Friday released its list of 62 counties throughout the nation that it considers nursing home “hot spots;” 23 were in Florida.

COVID leaks: A Miami Herald review found that in addition to a testing strategy that has been late, regulations allow thousands of untested vendors and staff to enter even as cases keep rising at an alarming rate. The trade association for nonprofit nursing homes is demanding more tests — and unleashed a cry for congressional help.

COVID in the governor’s office: Even within the governor’s own orbit, COVID-19 doesn’t appear to be under control. Several staff members of the governor’s Office of Policy and Budget were sent home Thursday after a staff member, who had returned to work while sick and coughing, tested positive for COVID-19. DeSantis has not required state employees to wear masks while working, the Herald was told, but employees who want to work from home have been told they must use sick leave to do so unless they get approval from a supervisor.

Teachers sue: School officials across the state have started to push back against the governor’s claim that Florida will be safe to open schools in the fall. The Florida Education Association filed a lawsuit a week ago against DeSantis and Education Commissioner Richard Corcoran, asking the court to stop the “reckless and unsafe reopening of schools” as COVID-19 cases continue to spike in Florida.

DeSantis rebuts: Two days later, DeSantis aired a six-minute rebuttal on the state’s public television channel, The Florida Channel, and argued that children “are at the least risk of the virus” and that kids play the “smallest role in transmission of the virus.” He has yet to produce or supply the data he and Corcoran are using to draw these claims.

Pence to UM: If people don’t trust the governor and president on their handling of the coronavirus, will they trust them when it comes to the vaccine?

Let’s pose that question to Vice President Mike Pence, who is headed to Miami today (Monday) to promote the Trump administration’s efforts to bring a coronavirus vaccine to market and highlight the work being done at the University of Miami. The event is intended “to mark the beginning of Phase III trials for a coronavirus vaccine,’’ the White House said.

Biden’s field team troubles: Meanwhile, Biden’s campaign in Florida is having its own credibility troubles. Over 90 field organizers for the Florida Democratic Party signed a scathing letter Friday to the party’s leadership, claiming mistreatment of field organizers and Hispanic outreach staff, relocating trained staff members without explanation, lack of organizing resources and taking on volunteers who are then left in limbo.

Biden’s Coordinated Campaign Committee “is suppressing the Hispanic vote by removing Spanish-speaking organizers from Central Florida without explanation, which fails to confront a system of white-dominated politics we are supposed to be working against as organizers of a progressive party,” the letter states.

The ad, which was scheduled to run for one day, seizes on the controversy over what Goya CEO Robert Unanue said during a White House press conference that the U.S. is “blessed” to have Trump as president. The comments promoted a call for a boycott of Goya Foods from opponents on the left, and set off a counter-reaction among Trump supporters who rushed to fill their pantries with the brand’s canned beans and boxed seasonings.

New DeSantis adviser: As the governor’s coronavirus messaging strategy appeared to be tanking his approval ratings, DeSantis changed up his strategist. Fred Piccolo, who was the spokesperson for the last two Florida Speakers of the House, was named the new DeSantis communications director, succeeding Helen Aguirre Ferré, a former television journalist.

Piccolo, a conservative whose ideology leans far to the right, has a better relationship with the capital press corps than Ferré had, and he comes with more political consulting background. But can he succeed at getting the novice governor to listen any more than a veteran journalist did? We’ll be watching.

Gillum resurfaces: Failed Democratic gubernatorial candidate Andrew Gillum made his first public remarks since entering rehab in March last week, using an 11-minute Instagram address to describe how he battled depression and alcohol addiction after losing the 2018 race to DeSantis. In the video, Gillum apologized to supporters for his actions and said he suffered from depression for years.

Sweltering prisons: Despite the state’s being among the hottest in the country, only 18 of its 50 prisons have air-conditioning and that’s making them death traps for COVID-19.

Shady PC: It’s that time of the year for sketchy political committee shenanigans. This one surfaced in the Keys in a three-way Republican primary for House District 120. Expect more to come.

Some good news: A federal judge has ordered the unsealing of key documents, including depositions, from a settled civil lawsuit involving Ghislaine Maxwell and victims alleging sexual abuse by Jeffrey Epstein in response to the Miami Herald’s investigation. The judge ruled that the public interest in the matter outweighed Maxwell’s claims that the documents, including depositions of central players in the Epstein saga, would prove embarrassing or interfere with ongoing legal matters.

See you in two weeks: Your author, Mary Ellen Klas, will be taking a bit of a summer break. Check your inboxes for Politics and Policy in the Sunshine State on Aug. 17, just before the Aug. 18 primary.

Stay safe all and remember, the Miami Herald and McClatchy news sites have lifted the paywall on some of our coronavirus-related stories, but we very much need your help. To support vital reporting such as this, please consider a subscription for unlimited digital access.

Know someone who’d like to get this? Send this to a friend to receive our weekly newsletter on politics and policy.