Docker has shot up in popularity over the years. Postgres (a.k.a PostgreSQL) is an open-source, standards-compliant, and object-relational database been developed for more than 30 years now. This official feature matrix shows the wealth of features Postgres has. 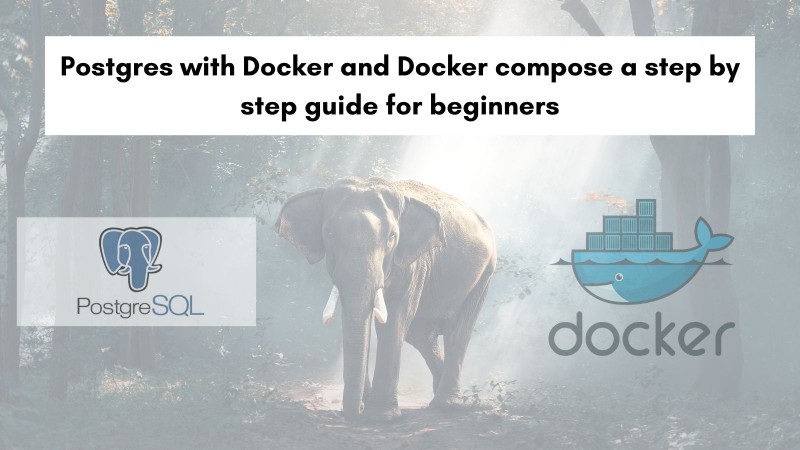 Why use Postgres with docker for local development #

There are many good reasons to use any database like Postgres with Docker for local development, below are some good reasons:

You can read more about this on why to use docker. In the following section, we will look into some good to have things before diving into the commands to run Postgres with Docker.

Before we dive into some CLI commands and a bit of code below are some prerequisites best to have:

Given the prerequisites have been mentioned we can move forward to the next section where we will run some docker commands. Get those itchy fingers ready now.

For this post, we will use the official Postgres docker alpine image from DockerHub. We will be using the latest version 14.1 of PostgreSQL.

The default bullseye version of Postgres docker image is 130 MB whereas the alpine one for the same version is 78 MB which is a lot smaller.

To simply run the container using the Postgres 14.1 alpine image we can execute the following command:

Let’s evaluate what the above command does. It tries to run a container from the posgres:14.1-alpine image which will be pulled in from Dockerhub by default if it does not exist.

First, the name basic-posgres is given to the running container, and --rm will clean up the container and remove the file system when the container exits. Some environment variables have been added to make things easier.

The last 3 parameters are interesting, -v adds a volume to store data, for this example, it has been mapped to /tmp so all data will be lost when the machine restarts. Next, we use the -p parameter to map the host port 5432 to the container port 5432.

The last parameter to the command is -it to have the tty available. When we run the command we will see an output like the below:

The container is running and ready to accept connections, if we run the following command we can go inside the container and run the psql command to see the postgres database which is the same as the username supplied in the event variable.

As seen in the above picture \q will quit the psql CLI and exit the container’s shell we have ran exit.

If we go back to the running container and hit Ctrl+C it will stop the container as well as clean it up as we have used the --rm parameter when we ran it.

This is a way to run Postgres with docker but as we have seen it is not easy to remember the 10 liner command and all the needed parameters.

Also, we have not specified any link between the database and our application. This is where the docker-compose file and docker-compose command comes in very handy as seen in the next section.

To run the same Postgres 14.1-alpine with docker-compose we will create a docker-compose-pg-only.yml file with the following contents:

The docker-compose file has the following things to consider:

After that explanation, to start the containers we will run docker-compose -f docker-compose-pg-only.yml up which will show an output like below:

So the Postgres database is running and this time it was a one-line command, not a long command to get it running as all the needed parameters were in the docker-compose file.

At this point, the Postgres in the container will behave similarly to a local Postgres instance as we have mapped the port 5432 to the local port 5432.

Next up, we will see how we modify the docker-compose file to fit in an existing project.

Adding Postgres with Docker to an existing Node.js project #

Given we have seen PostgreSQL run with docker-compose, now we will integrate it with a running Node.js API project. A full step-by-step tutorial of how this Quotes API project is built with Node.js and Postgres is available for your reference. For this guide we will add a docker-compose.yml file with the following contents:

This file looks somewhat similar to the above docker-compose file but below are the main differences.

The first one is, here we use - ./db/init.sql:/docker-entrypoint-initdb.d/create_tables.sql on line number 13. We are doing this to create the quotes table and fill up the data as seen in this SQL file. This is the way to run initialization scripts for Postgres with docker. This is an idempotent operation, if the data directory is filled up the init.sql file won’t be executed again to prevent data overriding. If we want to force override the data we will need to delete the docker volume after a docker volume inspect.

Next, we define a new service called api which builds the local Dockerfile with target production and names it quotes-api. After that, it has a depends_on definition on the db container which is our Postgres container.

Finally, it maps all the local files to the /src of the container to make things run with Node.js.

This file is available on GitHub too for your reference.

When we run docker-compose up on the root of this project we can see the following output:

As the webserver is mapped to the local port 3000, we can see the output as below when hitting http://locahost:3000/quotes on any browser: 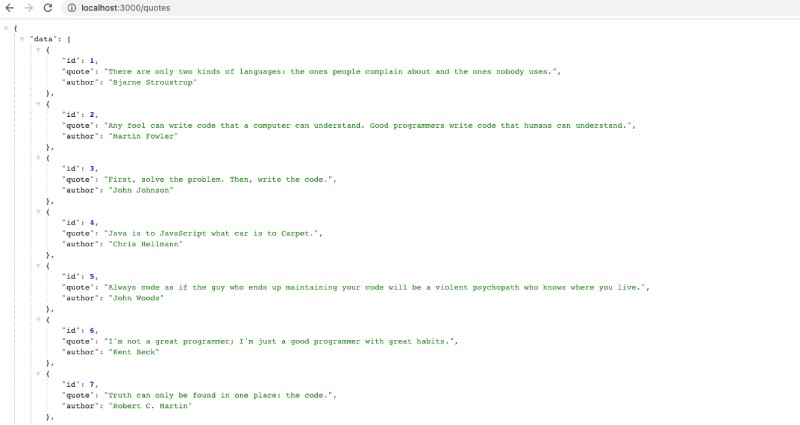 Hurray! Our Node.js Express API for Quotes is communicating correctly with the local Postgresql database as expected. If you want to quickly try the docker-compose up experience clone this Github repository and try it.

If Node.js with MySQL is your flavor of choice do read this guide too. You can also try Node.js with SQLite if that works better for you.

In this post, we witnessed how to run Postgres with just docker then added the docker-compose goodness to make things easier. After that, we added Postgres to an existing Node.js API to make the local development a lot easier.

I hope it makes it easier to understand how to run Postgres with Docker quickly and easily.