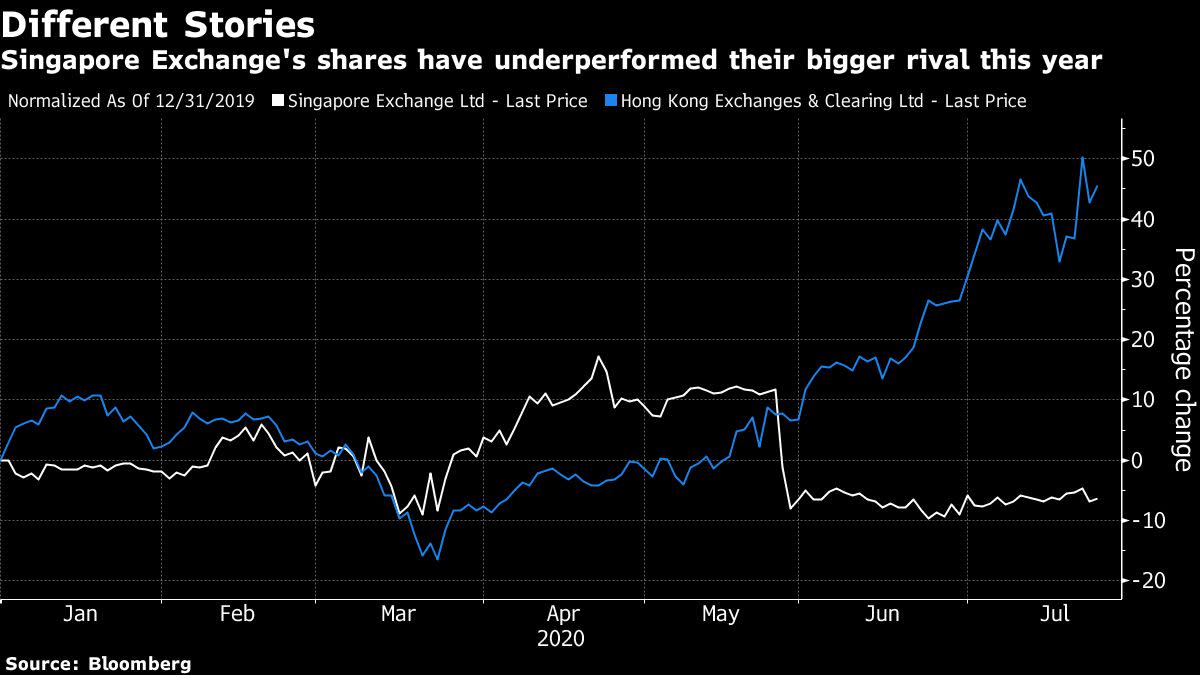 (Bloomberg) — With its new pact with Nasdaq Inc., Singapore Exchange Ltd. has thrown its hat into the ring to attract listings from the world’s hottest sector. But skepticism abounds over whether this strategy will succeed.

The Singapore exchange on Tuesday said it will extend its partnership with the tech-focused bourse to make documentation easier for firms seeking a second listing in the city-state. The deal heightens rivalry with Hong Kong as the north Asia hub launches a tech index for its 30 biggest stocks, analysts said. SGX shares fell 2.3% in the trading session following the release.

“It remains to be seen if it will be a game-changer,” said Rui Wen Lim, an analyst at DBS Bank Ltd. There are several considerations, such as target investor base, costs and valuations, she said.

Singapore has long been seen to have a sound legal and regulatory framework, benefiting from stable politics. However, the exchange has suffered from a spate of delistings in recent years, a marked absence of any big-ticket tech offerings, and was recently hurt by MSCI Inc.’s decision to select Hong Kong to licensing some of its derivative products.

“Besides offering liquidity with sustainable and growing valuations,” SGX’s platform has helped listed companies raise four times more funds through the secondary market than at IPO over the last five years, an SGX spokesperson said in an email.

Here are several metrics outlined by analysts to gauge the competitiveness of Singapore’s equity market for tech listings.

Tech stocks in Singapore are much cheaper than their peers in other markets, with the sector on average trading at 14 times forecast earnings, compared with 40 times in Hong Kong and 76 times in the U.S.

However, fundamentally, valuation is “more a function of the company, not the exchange it is listed on,” Lim said.

While average daily turnover in the past 60 days for stocks on Singapore’s Straits Times Index is about a seventh of the Hang Seng Index’s, their liquidity is better by another measure. At 52.7%, shares changing hands as a percentage of market value was higher for the Singapore gauge for the year ending June 30. Still, Hong Kong is the world’s fourth-largest equity market. Analysts are divided on whether Singapore’s market is deep enough to host large tech offerings.

Justin Tang, head of Asian research at United First Partners, has an opposing view. “If a company listed on the Nasdaq cannot find enough liquidity, it won’t find it on the SGX,” he said. The daily turnover of the Nasdaq Composite Index is about 70 times that of the Straits Times Index.

So far tech listings in Singapore are overshadowed by its peers. There have been zero tech listings this year in the city-state, which is home to about 70 tech stocks in total.

In contrast, Hong Kong — the busiest IPO venue in the world last year — had nine tech listings so far this year, taking its total tech stocks to more than 250. The U.S., home to heavyweights such as Apple Inc. and Microsoft Corp., had 19 new listings this year and includes more than 670 such stocks.

It “really depends how SGX could convince emerging technology firms to list domestically,” said Margaret Yang, a strategist at DailyFX.