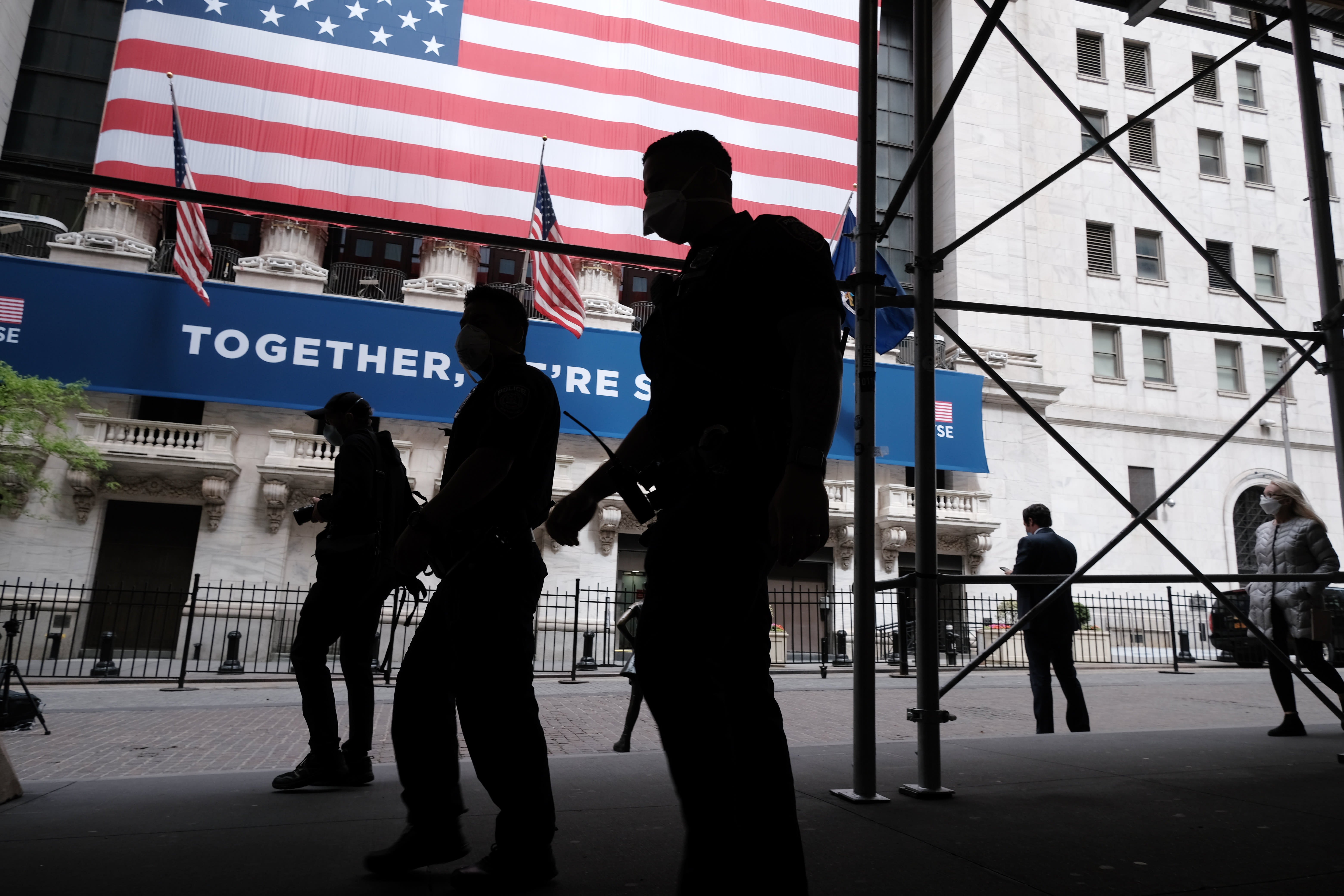 Stocks were slightly higher at the start of an eventful Wednesday, during which Big Tech executives will testify before Congress and the Federal Open Market Committee will release its July monetary policy statement. A host of quarterly corporate earnings results also continued to flow.

On Wednesday, Amazon (AMZN) CEO Jeff Bezos, Apple (AAPL) CEO Tim Cook, Facebook (FB) CEO Mark Zuckerberg, and Google-parent Alphabet (GOOG, GOOGL) CEO Sundar Pichai will appear before the House Judiciary Committee to discuss a number of concerns over their market power and business practices, some of which have been scrutinized for antitrust issues. Many have argued that these issues have been magnified by the coronavirus pandemic, which has wiped out competitors and pushed business further toward the already-strong major tech companies.

“While fundamentally FAANG stalwarts have navigated these choppy waters better than many had feared, with Amazon in particular a clear beneficiary of this current lockdown, the anti-trust storm clouds appear to be building in the Beltway against Big Tech looking ahead into the rest of 2020,” WedBush analyst Dan Ives wrote in a note Monday.

“We note that much of the States’ investigation has focused on Google’s online advertising with the Justice Department focusing more broadly on concerns that Google uses its dominant search business to stifle competition,” he added. “Apple remains in the cross-hairs around its App Store (30% fee) dominance both in the US and especially in the EU, with a more intense investigation of its business practices in focus later this week as Cook appears in front of the committee.”

Separately on Wednesday, investors are also set to receive the Federal Reserve’s latest monetary policy decision. Market participants expect this month’s statement will reflect no major changes, with interest rates held at their current near-zero level. On Tuesday, the Federal Reserve said it planned to extend several of its emergency lending facilities through year-end 2020, or beyond the previous expiration date of September 30.

With monetary policy set in its current form to support the economy during the pandemic, investor attention has turned toward the possibility of explicit forward guidance to gain an indication of what circumstances might lead the Fed to change its monetary policy stance. Many economists believe that is unlikely to be announced this month, however.

“We do expect the FOMC to adopt some form of explicit forward guidance, if not at its September meeting then at its November meeting,” Wells Fargo’s economics team wrote last week.

Kodak, a brand that’s largely been left by the wayside amid advances in photo technology and smart phones, has found a friend in President Trump — and Wall Street. On Tuesday, the Trump administration used the Defense Protection Act (DPA) to fund initiatives for Eastman Kodak (KODK) and FUJIFILM (FUJIY) to manufacture much-needed medical supplies.

Under the DPA, Kodak has received a $765 million loan to pivot to producing generic drug active ingredients — a product that largely produced in overseas facilities in India and China.

The end result is that Kodak’s stock has rallied five-fold in early Wednesday trading. Not bad for a company largely forgotten in a world of smart phones and digital technology.

Pending home sales in the US rose for a second straight month in June and by a larger than expected margin, according to the National Association of Realtors on Wednesday.

Pending home sales advanced 16.5% in June after a record 44.3% surge in May.The level of contract-signings also rose over last year, in a sign of sustained recovery in the housing market.

“It is quite surprising and remarkable that, in the midst of a global pandemic, contract activity for home purchases is higher compared to one year ago,” Lawrence Yun, NAR’s chief economist, said in a statement. “Consumers are taking advantage of record-low mortgage rates resulting from the Federal Reserve’s maximum liquidity monetary policy.”

The coronavirus took a heavy toll on the world’s largest plane maker and the top U.S. automaker — both of which posted grim Q2 figures. Boeing’s 737 MAX woes continued to hamper its operations, and will cut production on 2 separate lines. The mess helped to blow a nearly $2.4 billion operating hole in Boeing’s (BA) bottom line. However, the company said it was making “steady progress” in getting the flagship plane back into the sky.

Meanwhile, GM swung to a loss as COVID-19 related production shutdowns led to a net loss of $806 million for the quarter. The stock (GM), however, surged by over 4% in pre-market action.

An index tracking mortgage application volume fell during the week ended July 24 for the first time in four weeks, according to the Mortgage Bankers Association.

Taken together, the headline market composite index fell 0.8%, seasonally adjusted, to mark a deceleration after a 4.1% gain during the prior week.

“Homebuyers stepped back slightly, and there was a larger drop in purchase application volume for FHA, VA, and USDA loans,” he added. “This trend, along with the fact that average loan sizes are increasing, indicate that prospective first-time buyers are being impacted more by the rising economic stress caused by the resurgence in COVID-19 cases, as well as the uncertainty on how the next round of government support will take shape.”

Stock futures kicked off the overnight session slightly higher following a drop during the regular session on Tuesday. Here were the main moves in equity markets, as of 6:01 p.m. ET: