Stocks fall after jobless claims come in worse than expected 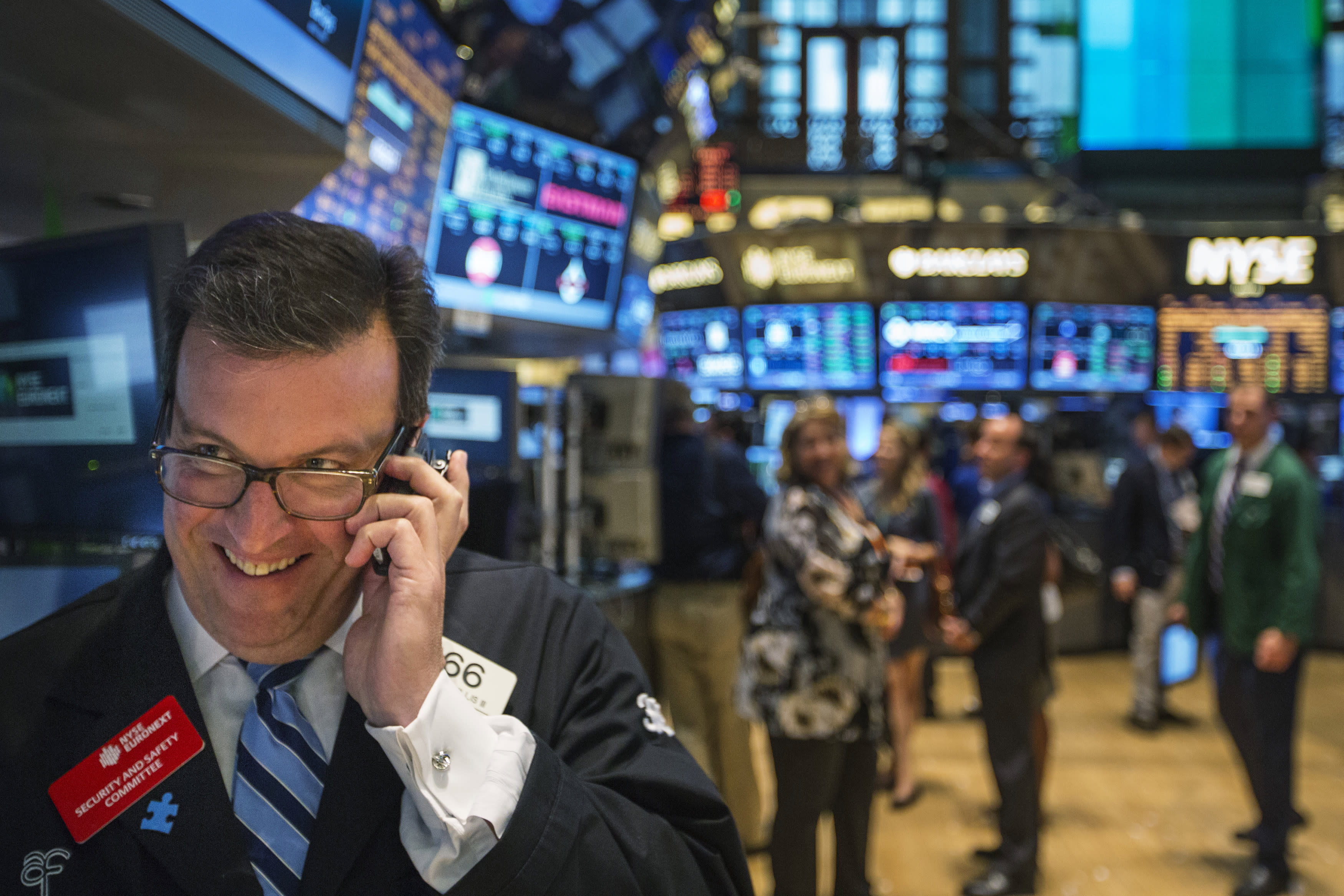 Stocks fell, with a selloff accelerating into Thursday afternoon as investors focused on the U.S.’s unchecked coronavirus crisis and a new rise in jobless claims. Tech shares led declines, with each of Facebook, Amazon, Apple, Netflix, Alphabet and Microsoft falling during intraday trading.

New weekly unemployment insurance claims rose by more than 1.4 million last week, with the level of new claims increasing for the first time since mid-March. Last week, new claims were slightly above 1.3 million.

The new claims brought the total since the week ended March 20 to more than 52 million, underscoring the devastating impact of the coronavirus pandemic and measures taken to contain it on the labor market.

Given signs of a weakening labor market, analysts are nervously eyeing another round of coronavirus-related fiscal stimulus talks in Washington, with hopes building for a compromise on unemployment payments. Economists are warning that the recovery could be jeopardized by the failure of Congress and the White House to extend a lifeline to cash-strapped consumers.

The White House and Senate Republicans hit impasses earlier this week, contributing to concerns over whether the sides would be able to come to an agreement before enhanced unemployment benefits expire at the end of next week. Treasury Secretary Steven Mnuchin said the White House and Senate Republicans had reached a “fundamental agreement” on a GOP stimulus plan, according to a Bloomberg report, with the White House having dropped its earlier demand for the legislation to include a payroll tax cut. The size of the proposal is set to be about $1 trillion.

A day earlier, CNBC reported that Republican lawmakers were considering extending the boosted unemployment benefits at a reduced $100 per week through December, down from the $600 offered previously.

“The combined effect of rising layoffs, expiring unemployment benefits and escalating coronavirus outbreaks sets up a perfect economic storm that could easily derail the weakening economy’s fledgling recovery,” he added.

Investors also digested a batch of corporate earnings results from Microsoft (MSFT), Tesla (TSLA) and Chipotle (CMG)— all bellwethers of their respective industries. The software giant was boosted by the performance of its cloud platform in the latest quarter, but its stock slipped after growth in Azure specifically decelerated over last quarter and missed expectations. Meanwhile, the electric carmaker’s shares declined on Thursday, giving back overnight gains after posting a surprise Q2 profit and announcing a new factory in Austin, Texas.

Developments between the US and China also remained in focus. On Wednesday, relations with the U.S. and China were tested further by new fissures in their fractured relations, as the U.S. moved to close China’s consulate in Houston, and filed hacking charges against two Chinese nationals. Global Times editor Hu Xijin said on Thursday that China is expected to announce countermeasures on Friday in Beijing.

Texas’s attorney general may sue Apple over violations of the state’s deceptive trade practices law as part of a multi-state investigation, Axios reported. The current practices under investigation and status of the probe remain unclear.

The investigation would add to others the iPhone-maker is already facing from US House lawmakers and the European Union over antitrust concerns.

1:00 p.m. ET: China set to announce countermeasures against US over Houston consulate decision on Friday

China is set to announce countermeasures against the US on Friday over its decision to force the closure of Beijing’s consulate in Houston, according to the editor in chief of China’s state-run Global Times.

Based on what I know, China will announce countermeasure on Friday Beijing time. One US consulate in China will be asked to close. China is forced to take this reciprocal measure. If not, it would cause serious consequences.

Losses in the Dow were led Thursday by the materials company Dow (DOW), which earlier in the morning reported disappointing second-quarter earnings results and plans to slash its global workforce amid fallout from the pandemic.

Second-quarter sales fell 24% to $8.4 billion for Dow, with a drop in both volumes and prices weighing on the top line. A dearth in demand for consumer durable goods contributed to the sharp top-line drop. The company also swung to a quarterly loss, with net losses totaling $189 million.

Dow announced a restructuring program to target more than $300 million in annualized EBITDA benefit by the end of 2021. As part of this, the company said it plans to slash 6% of its global workforce. Dow employed about 36,500 full-time workers as of the end of December.

CEO Jim Fitterling suggested the worst of the impact from the Covid-19 outbreak was behind Dow.

“Extended economic lockdowns shifted the inflection point for demand recovery in key markets and geographies into June, where we began to see gradual improvements across most industries,” he said in a statement. “The growing recovery in China and early signs of improvement in Western Europe are positive indicators for the United States and Latin America.”

Contracts on the S&P 500 and Dow erased earlier gains to trade lower heading into the opening bell Thursday, with the disappointing report on new weekly jobless claims in focus.

The labor market hit another speed bump last week, as first time initial unemployment claims rise to 1.4 million, slightly above consensus. The swelling ranks of the jobless come as the U.S. grapples with a wave of new coronavirus cases prompting states and localities to reimpose restrictions on public life, and presage a pullback in jobs creation when the July payrolls data gets released.

According to market veteran Peter Boockvar:

This is the 1st [week over week] uptick since March, and likely coincides with reclosings that we’re seeing along with businesses that are painfully throwing in the towel in the leisure and hospitality sector. Not seasonally adjusted, those filing under the Pandemic Unemployment Assistance program grew by 975k vs 955k in the week before.

Continuing claims, delayed by a week, though fell to 16.2mm which is a decline of 1.1mm w/o/w and below the forecast of 17.1mm. These numbers also do not include those receiving claims via the Pandemic Unemployment Assistance program which covers those that are self employed and as of July 3rd totaled 13.2mm people. So we have about 30mm receiving benefits of some sort and thus goes to the importance as to what extent the benefits get extended after July 31st.

Bottom line, the labor market hole we need to come out of remains large and will take a lot of time to recover from. Mass inoculation next year will of course speed that process up.

Twitter (TWTR) posted a second straight quarter of record growth in average monetizable daily active users (mDAU), which rose 34% over last year to 186 million in the three months to June 30.

However, overall revenue of $683.4 million was down 19% year on year and below estimates for $704.6 million, as the global pandemic weighed on advertisers that would typically turn to Twitter’s ad platform. Ad-specific revenue fell 23% over last year to $562 million.

“Widespread economic disruption and a significant decrease in global advertising spend as a result of the pandemic led to a 27% decline in advertising revenue in the last three weeks of March,” Twitter said in a statement. “We saw a gradual, moderate recovery relative to March levels throughout most of Q2, with the exception of late May to mid-June, when many brands slowed or paused spend in reaction to US civil unrest. During the last three weeks of June, advertising revenue declined 15% year over year. Demand gradually improved once brands returned after the protests subsided.”

Here were the main moves at the start of the overnight session for U.S. equity futures, as of 6:15 p.m. ET: