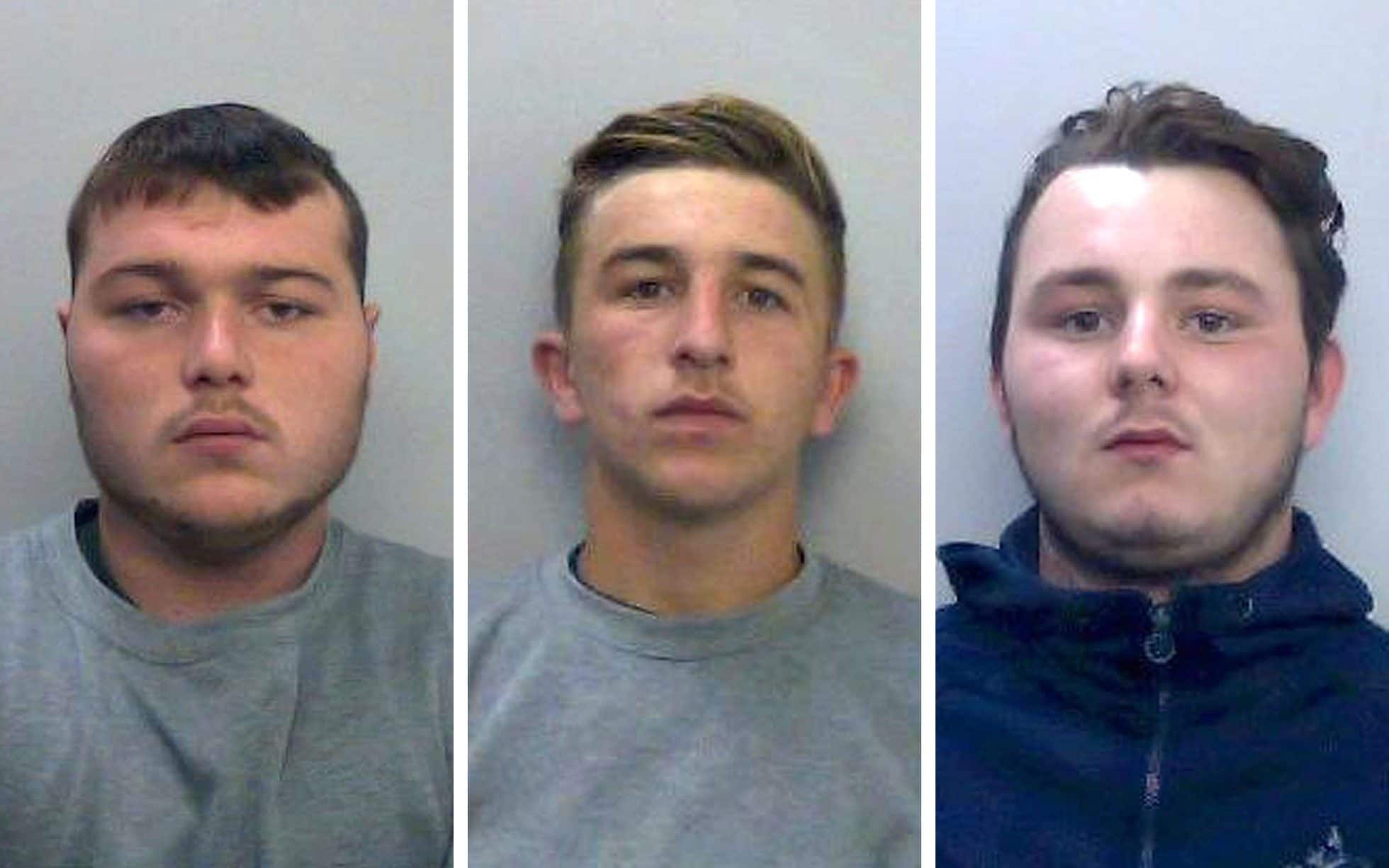 Three teenage thieves who dragged a newly married police officer to his death have been jailed at the Old Bailey   following their conviction for his manslaughter.

Henry Long, 19, who was driving the car that was towing a stolen quad bike, was jailed for 16-years, while his accomplices Albert Bowers and Jessie Cole were each given 13-years.

The judge said while it was a case of manslaughter it was very close to murder in its seriousness and he rejected that they were remorseful over the officer’s death.

She told the court: “My husband was brutally killed four weeks after our wedding day. Should I speak again of how we were robbed of our future or the plans stolen from us?

“Four weeks was all I had with my husband – four weeks to be called his wife. My life often feels bleak, hopeless, irreparable. Every aspect of my life since Andrew was taken is bitterly different.”

Mrs Harper, said she had been “utterly shocked and appalled” that the gang had been cleared or murder and wrote an open letter to Boris Johnson asking for a retrial after it emerged that there had been concerns about jury tampering.

Thames Valley Police have confirmed that they received intelligence about possible jury intimidation in the first trial in March, which had to be abandoned because of the lockown.

Earlier this month one of the jurors in the second trial had to be discharged after she was heard saying “Bye boys” to the defendants at the end of a day’s evidence.

But the trial judge Mr Justice Edis allowed 11 jurors to continue with the case and Thames Valley Police have said there is not a “shred of evidence” that the jury was influenced in anyway.

Speaking before he began the sentencing hearing, the judge conceded that the verdicts had “caused some controversy”.

He said: “I have deliberately avoided reading press reports on it. However, I have been made aware that there has been some discussion about the trial and in particular the measures in place for protection of the jury.

“It may be believed in some quarters the jury were under improper pressure. There is no truth in that at all.”

PC Harper, who had been married for just four weeks and had been due to go on honeymoon, suffered horrific injuries when his ankles became caught in the crane strap being used to two the stolen quad bike and he was dragged for more than a mile at speeds in excess of 50 miles per hour.

Long, Bowers and Cole were charged with murder after the prosecution alleged that they must have known PC Harper was being pulled along behind them as they tried to escape.

But the jury rejected the prosecution case and convicted Bowers and Cole of the lesser charge of manslaughter. Long had already admitted manslaughter.

Despite the verdict, Mr Justice Edis, in his sentencing remarks, said he rejected the gang’s evidence that they did not know they were dragging something behind them.

“I reject their evidence that none of them ever looked back to see. The marks on the road show without any doubt that the driver was trying to dislodge whatever was attached. They drove without caring what it was,” he said.

He also said he rejected their claims that they were remorseful about what had happened.

They all admitted conspiracy to steal a £10,000 quad bike from a house in Berkshire and a fourth defendant, Thomas King, 21, from Basingstoke, also admitted he same charge but was not present when PC Harper was killed.

The verdicts also caused outrage because the three killers had been seen laughing and joking during the trial including when harrowing evidence about the officer’s injuries was being described to the court.

But Long’s barrister insisted his client had showed genuine remorse over the killing.

Mrs Harper supported by family members at the Old Bailey to hear the sentences handed out to her husband’s killers.

A witness impact statement read to the court on behalf of Pc Harper’s mother Deborah Adlam, said: “I am unable to explain the enormity of what I’m feeling and have been struggling with since we were awoken on August 15 2019 at 4.45am to the worst news imaginable.

“He died because these defendants chose to steal a quad bike. My family and I feel broken – can you imagine a loved one dying with such indignity?”

“He was our first-born child and he has been ripped from me. I haven’t been able to work for fear of breaking down, my mind just isn’t in the right place, my anxiety is overpowering.

“I hardly sleep… I have no motivation or even daily routine – chores or cooking a meal, it just feels pointless now. I have sat in the mortuary of my son’s covered body, too damaged for me to see.

“He will never get to be called ‘daddy’ or hold his own child – we imagined this was not too far away in the future. Andrew was such a good man, a brave, a caring person, funny and uplifting. I love and miss him daily with every passing moment. He will be loved forever.”

The family’s calls for the gang to face a retrial have been taken up by the former policing minister Mike Penning, who has written to the Attorney General asking for the matter to be looked into.

However in order for the verdicts to be quashed there would either need to be a ruling under the double jeopardy laws, following the discovery of compelling new evidence, or so

Asked if he had any concerns about the way the trial had been conducted, Detective Superintendent Stuart Blaik, the senior investigating officer said:

“There are no concerns from the investigation team. I know there has been a lot of reporting on this matter and we were in receipt of some intelligence right at the very beginning of the first trial.

We haven’t had any further intelligence and obviously there was the added complication in the st trial of the discharge of one of the jurors, but there is not a shred of evidence that there has been any malpractice or intimidation of the jurors or anything of that nature.”

When PC Andrew Harper and his colleague Andrew Shaw received a report of a burglary on the night of August 15 last year, they were almost four and a half hours beyond the end of their shift.

PC Harper, or Harps, as he was known to all his friends and workmates, had only been married for four weeks and could have been forgiven for wanting to get home to his new wife, Lissie.

But in a display of trademark professionalism he did not think twice before answering the call.

It was a decision that would cost him his life.

Pulling off the motorway at Junction 12  PC Andrew Harper and his colleague Andrew Shaw headed towards the village of Bradfield Southend, where a homeowner had reported that some men had just made off with his new £10,000 quad bike.

As they approached the property down a single track country lane they came across a Seat Toledo coming the other way and it was towing the stolen quad bike.

The gang responsible, who were members of West Berkshire’s traveller community, were just teenagers, but had armed themselves with makeshift weapons before setting out on what for them was a regular “thieving” mission.

Henry Long, 19, was driving the Seat, Albert Bowers, 18, was in the front passenger seat, and Jessie Cole, 18, was sat astride the quad bike steering it as it was pulled along behind the car.

Without a thought for his own safety, PC Harper leapt from his vehicle and made towards Cole, who on seeing the unmarked police car approach, had managed to unhitch the quad bike and clamber into the Seat.

In a tragic twist of fate, as the thieves accelerated away from the scene, the trailing crane strap, that had been towing the quad bike, became wrapped around PC Harper’s ankles and he was pulled off his feet and dragged along behind the speeding getaway car.

Hurtling along the narrow country lane, the officer was dragged along the ground for more than a mile, his flesh being stripped from his body as it went.

When the fleeing Seat came to the junction with the busy A4, Bath Road, a motorist, who was forced to brake suddenly, reported seeing what he thought was the bloodied carcass of a deer being pulled behind the car.

He then realised to his horror that it was actually a person.

After more than a mile of unimaginable torture, PC Harper’s body was finally torn loose and the gang raced away to a travellers’ site around five miles away, where they attempted to manufacture their alibis for the night.

When PC Shaw came across his colleague’s body lying in the road, he was barely alive.

Harps was pronounced dead a short time later at the scene.