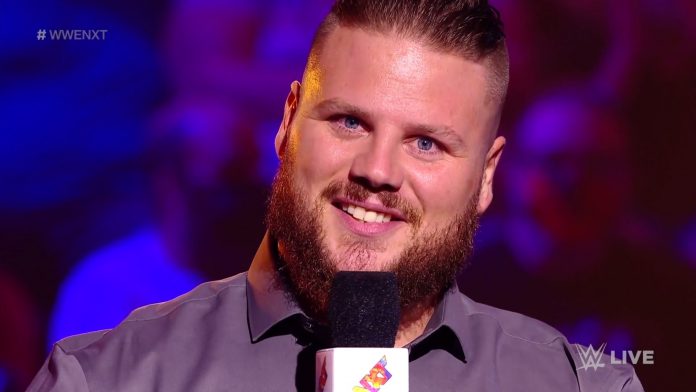 Joe Gacy says he has not been cancelled.

This week’s WWE NXT 2.0 episode featured another in-ring segment where Gacy talked about the ring being a safe space. As noted last week, there was some speculation on WWE nixing the “woke” character after videos and tweets related to last week’s debut were nixed, right after mainstream media coverage that included headlines on how “WWE pinned the woke left” with Gacy’s new gimmick.

This week’s promo was similar to last week’s segment, but Gacy’s “politically correct” language seemed toned down a bit. He talked about how he made more of an impact last week than guys like NXT Champion Tommaso Ciampa, Bron Breakker, and NXT Cruiserweight Champion Roderick Strong.

“I am Joe Gacy and contrary to popular opinion, this is still our safe space,” Gacy said. “Last week on NXT 2.0 I made a huge impact and I have not been cancelled. I made a bigger impact than Superstars like Tommaso Ciampa, Roderick Strong, and Bron Breakker, using only my words. I didn’t throw one single punch. You see, I speak for a generation that nobody understands, except for us, the enlightened ones, and the rest of you are living in a darkened, obsolete world, and last week when I went back to the locker room I saw nothing but triggered faces.

“I don’t understand, Joe Gacy is inclusive and we can solve all of our conflicts with simple discussion and resolution. No one person can change the world, but I’m here to usher in the world to a new normal. I don’t want to take too much of your time, I know there’s a match coming up, but thank you for your open minds.”

Gacy tweeted after the segment and wrote, “I have not been Canceled”

Gacy returned to Twitter this morning and added, “Any conflict can be resolved simply using words and conversation. I am open to help anyone seeking assistance.”

While Gacy lost to Cameron Grimes after last week’s promo, he did not wrestle this week.

The mainstream media has not picked up on Gacy’s follow-up segment as of this writing, but it will be interesting to see if they provide any coverage this week.

“Contrary to popular opinion, this is STILL our safe space… Last week, I made huge impact, and I have NOT be cancelled.” – @JoeGacy #WWENXT pic.twitter.com/t1Gc6DTfcj

I have not been Canceled pic.twitter.com/zcqq1GDIwb

Thank you for the correction 😀

Any conflict can be resolved simply using words and conversation. I am open to help anyone seeking assistance. pic.twitter.com/IsbshCuHr9