Universally Unique Identifier (UUID) is very useful. In Node.js there are many ways to generate a UUID. One of them is with a native module and others are using NPM packages. UUID can be very useful as reliable unique identifiers. In this post, you will learn how to generate a UUID using Node.js and briefly understand when and why to use them. Let’s get started! 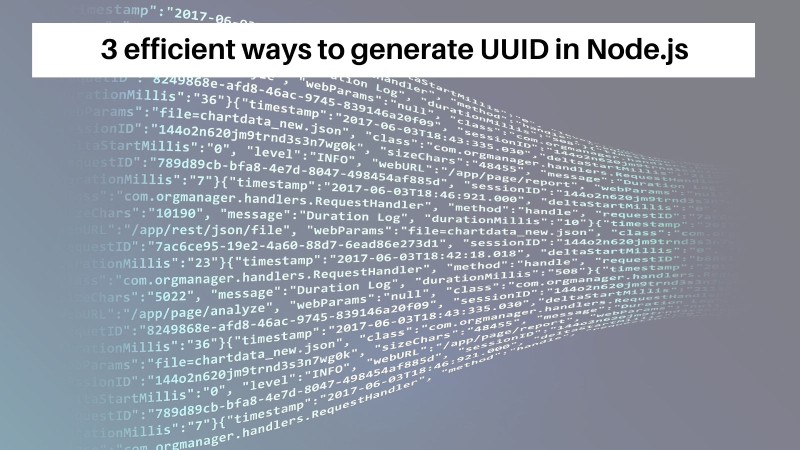 Prior to jumping into the code, below are some of the things best to have in order to run the code examples in the later sections.

Given we have that mentioned, in the next section we will look into why and when to use a UUID.

When to use Node.js UUID #

UUID is a great way to hide sequential database IDs. They can also be used to act as a hash which can be decoded back to an integer or other identifier. A sequential auto-increment ID can reveal much more than you intended. There are other great usages of UUID but hiding the autoincrement ID stands out in my opinion.

Get your competitor’s order volume example #

Just with the order id which is an autoincrement integer your competitor, possibly unknowingly is giving out a vital business metric to anyone who can do some due diligence. That is why exposing auto-increment IDs is bad. The same example can be applied for customer ID or shipment ID or any other integer identifier that increments by 1.

Baseline, whenever you need to hide your autoincerment ID it is best to use a random number or pattern that is hard if not impossible to guess. Or you can opt to use an UUID. If you want to read more about UUID feel free to read the wiki page which explains UUID4 too.

If you are interested in doing other things with Node.js, please do browse reading file line by line with Node.js. Using nodemon with these code examples will help too.

In the consequent part, you will learn 3 methods to generate a UUD in Node.js regardless of any framework you use.

Methods to generate UUID in Node.js #

The crypto module was added from Node.js 14.17.0. It provides cryptographic functionally for multiple methods and algorithms like OpenSSL’s hash, HMAC, cipher. It also provides a method called randomUUID to generate UUID in Node.js without instaling any new NPM module.

The method takes an options object that can have a disableEntropyCache boolean value that defaults to values. When it is set to true it doesn’t use the cache on the UUID generation. Below is a code example of Cryto module’s randomUUID function:

As this is a native module, we did not need any package.json file or npm commands. This can also be easily run on the CLI with node -i like the following:

In the consequent part, you will learn how to use the UUID npm package to generate a UUID in Node.js.

In addition to the native crypto module, you can surely use other NPM packages. The most popular NPM package to generate UUID is uuid. Of course, an NPM package will be needed if your application is in Node version 14.16 or below. UUID can be used in Node.js 10 and 12 too. It also supports UUID versions 1,3,4 and 5.

To install the UUID npm package, you can run npm install —save uuid given your project is set up with NPM and has the package.json and relevant lock file. You can quickly try out the UUIDs generated by this package with the code below named in a file uuid-uuid.js:

When you run the file on the CLI with node uuid-uuid.js you will get an output similar to the below:

That we pretty easy right? And you can choose which version of UUID you want to use. Version 1 is timestamp-based and version 4 is random.

Consequently, we will use the Nono ID NPM package to generate UUID with Node.js.

Nono ID is another popular NPM package used to generate UUID in Node.js. It brands itself as “A tiny, secure, URL-friendly, unique string ID generator for JavaScript.”. It is supposedly 2 times faster than UUID and smaller. It is also ported to 20 programming languages.

Similar to installing any other NPM package you can install Nano ID by executing npm install --save nanoid. Below is the code example of generating a couple of UUIDs with Node.js using the Nano ID package:

The first example is using the Nano ID packing in a sync way and the second one uses it in an Async way. Using ES6 import might have made it a bit easier to read, you can check out the ES6 import based examples on the Nano ID Github readme.

Given the file is saved as uuid-nanoid.js, you can run the above example with node uuid-nanoid.js which will yield an output similar to the following:

As known, the random UUIDs will surely be different for you than the example I have posted above. Both the above NPM modules can be used in the browser too.

All the above code examples can be found in this GiHhub repository for your reference.

In the subsequent sections, we will look at a fast popularity comparison between the above two and other NPM modules that can generate UUID in Node.js.

There are surely other NPM packages to generate UUID. Below is a quick comparison from NPMTrends for UUID, Nano ID, cuid, shortid, uuid-js and uuid4: 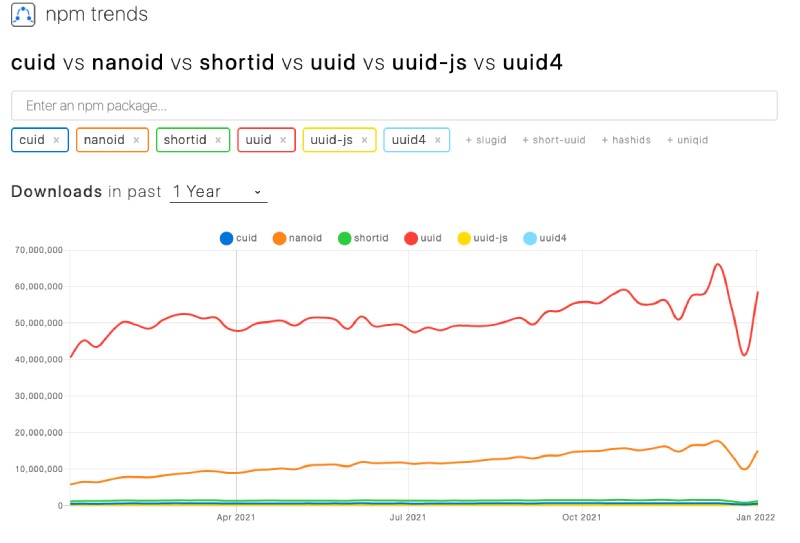 With this post, you have learned how to generate a UUID in Node.js using either the native crypto module or a couple of popular NPM packages. Other NPM package options were also briefly listed and compared to choose one that fits your needs.

The main question here is not which package or library to use.

The vital question to answer here is when and why to use UUIDs in your applications built with Node.js which the prior section answers properly with an apt example.

I hope you have learned a useful way to obscure important information that needs to be exposed and identified uniquely.