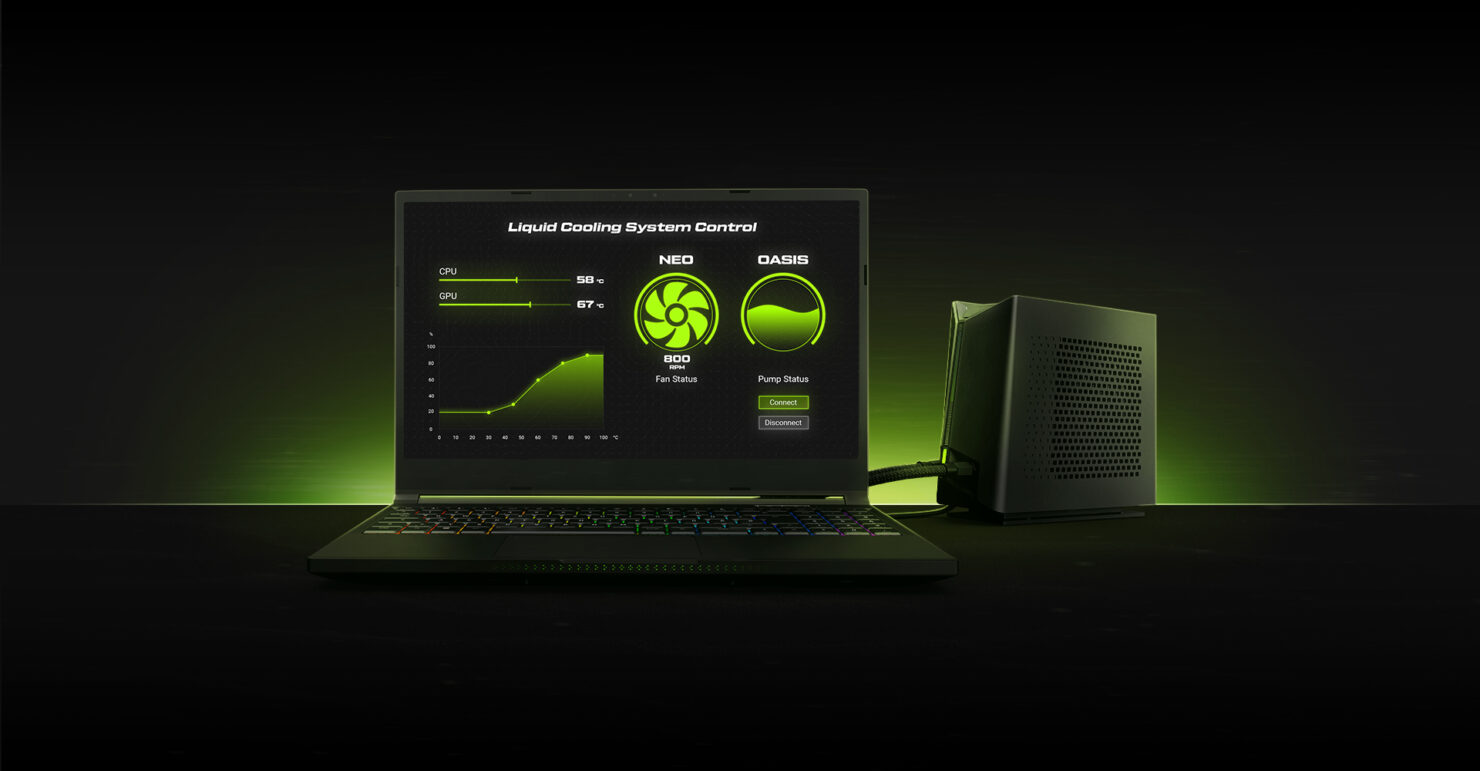 Press Release: XMG starts pre-orders for XMG NEO 15 and OASIS and provides a product roadmap for 2022

At CES 2022, XMG announced the NEO 15, one of the most powerful gaming laptops on the market, which caused a stir with its compatibility with the OASIS external laptop liquid cooling system. Alongside the start of the pre-order phase, the company is now announcing further details and product improvements. Since the gaming laptops with the latest generation of processors and graphics cards will not be released all at once this year but staggered, XMG also provides a preview of the product roadmap for the first half of 2022. 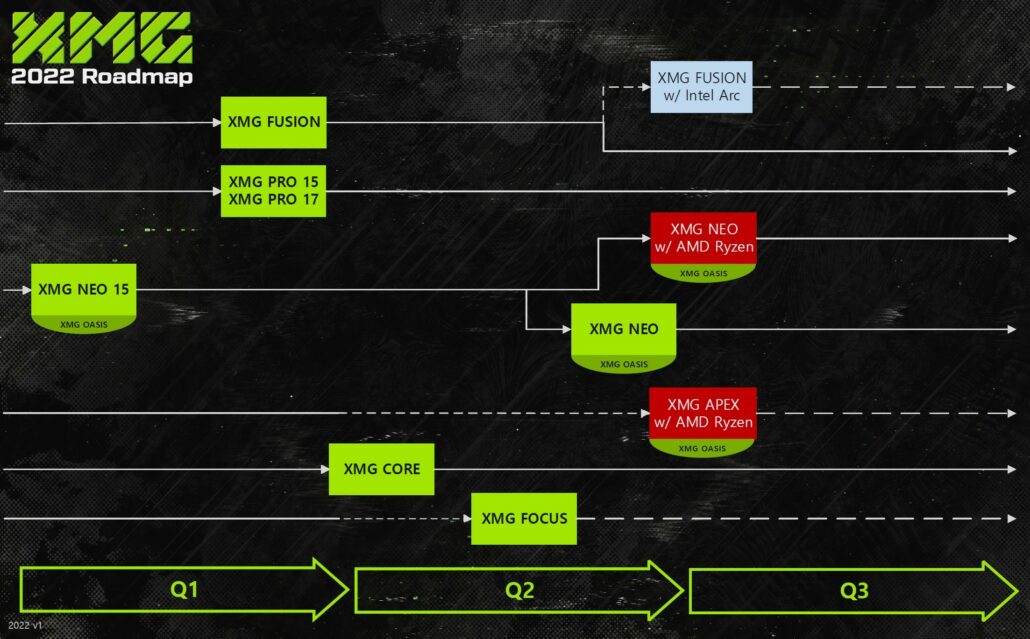 When pre-orders start, the XMG NEO 15 (E22) will be available with Intel’s new Core i7-12700H and three graphics options from NVIDIA, each with maximum TGP: the RTX 3080 Ti with 16 GB GDDR6 VRAM up to 175 watts, the RTX 3070 Ti with up to 150 watts and the RTX 3060, which operates at 140 watts in the current model instead of last year’s 130 watts maximum. Dynamic Boost 2.0 can be deactivated for all GPUs via the XMG Control Center in order to run them constantly at the highest TGP levels.

This makes the 360.2 x 234.5 x 26.6-millimeter laptop with a weight of 2.2 kg and a partial aluminum chassis one of the performance leaders in the gaming segment. The predecessor was well known for being able to provide stable, extreme performance over the long term thanks to its powerful cooling system. Liquid metal for CPU cooling and improved fans with 71 instead of 67 fins provide further optimization. With the optional, external XMG OASIS laptop liquid cooling system, the cooling performance can be further increased while at the same time reducing the operating noise under load. 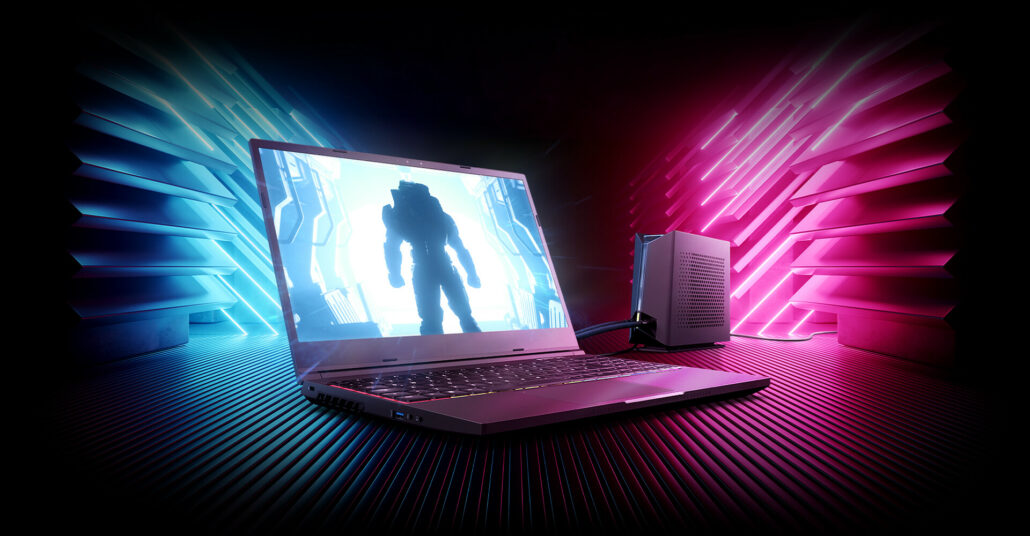 Up to 64 GB DDR5-4800, two M.2 SSDs connected via PCIe 4.0, a 93 Wh battery, and a 280-watt power supply (with RTX 3060: 230 watt) underline the high-end claim of the XMG NEO 15, as does a 240 Hz fast WQHD IPS display with 95 percent sRGB color space coverage. Compared to the predecessor model, XMG uses a Full HD instead of just an HD webcam and larger speakers for a punchier sound. The optomechanical keyboard with RGB per-key illumination and the Microsoft Precision touchpad are carried over from the previous NEO.

In addition to 2.5 Gigabit Ethernet, Wi-Fi 6, three USB A 3.2 ports, a full-size SD card reader, and separate audio jacks for headphones and microphone, the NEO 15 features two graphics outputs: an HDMI port connected to the dGPU and a Thunderbolt 4 port with two integrated DisplayPort streams. However, in accordance with Intel’s design of the Alder Lake mobile platform, the latter is directly linked to the iGPU and thus not VR headset compatible.

At the beginning of the year, the XMG OASIS attracted a lot of attention as an optional, external liquid cooling system for the XMG NEO 15. The AIO unit packs the radiator, fan, and reservoir into an external chassis and can be easily connected and disconnected from the laptop via a quick-release connector. In contrast to those early product samples, XMG has made quite a few improvements. 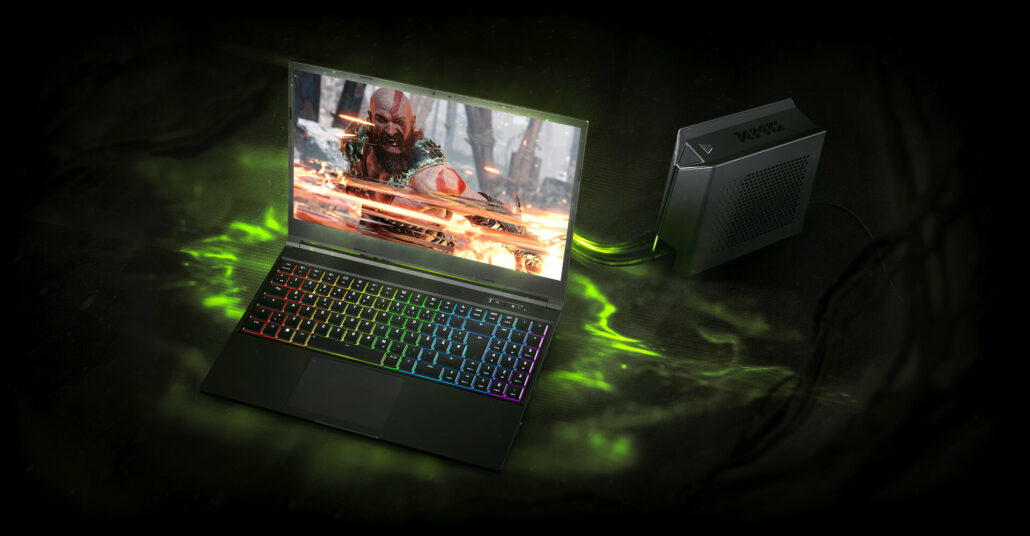 The revised reservoir, for example, now prevents air bubbles from entering the pump for quieter operation, the quick-release connection is tighter and fits more precisely, and the entire area around the water connectors on the laptop features greater stability and is better sealed. The PCB inside the liquid cooler has been optimized to avoid electromagnetic noise and the functionality of the OASIS has been enhanced with convenient OTA firmware updates. XMG has summarised further improvements in a news posting on its own website. The accessories supplied include cleaning utensils, a refill funnel and drainage adapter, silicone dust protection caps for the USB-C and HDMI ports on the XMG NEO 15, and one liter of EK CryoFuel Clear cooling liquid.

In contrast to the XMG NEO which is designed for maximum mobile performance, the update of the XMG PRO model series offers a somewhat more balanced concept. The laptops will feature a fundamentally redesigned chassis, which is slightly thicker compared to the very slim predecessor, in return for more performance. The top model will feature an RTX 3080 Ti operating at a TGP of 155 watts (2021 model: max. 105 watts). Compared to the NEO, the new PRO offers slightly more versatile connectivity, including a dedicated Mini DisplayPort directly connected to the dGPU. Due to the expected shortage of DDR5 RAM, XMG is planning the PRO with DDR4 despite the update to 12th gen Intel Core. The laptops are expected from the end of the first quarter. 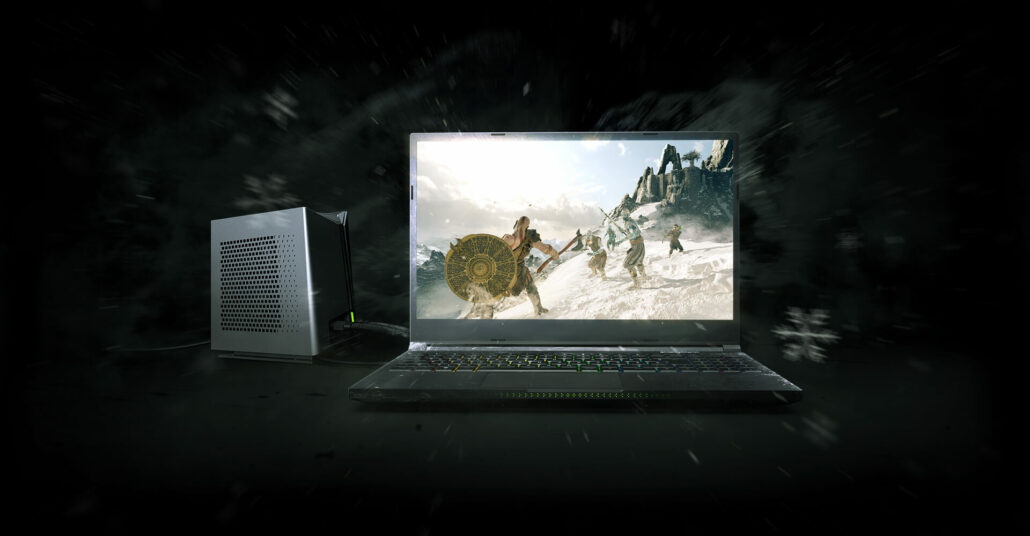 Another highlight is coming with the follow-up to the long-running XMG FUSION 15 from 2019: The upcoming XMG FUSION 16 is even more trimmed for thinness and lightness and will feature a 16:10 display, among other things.

In the upper-performance mid-range, represented by the XMG CORE with RTX 3060, XMG wants to stick to the dualism of an Intel- and AMD-based model, just like with the NEO, but further details on this plan are not expected until the second quarter. The series could also be upgraded with a new magnesium casing to reduce weight.

An update of the APEX model series with Ryzen 6000 CPUs are scheduled for the end of the second and beginning of the third quarter at the earliest. Alongside the NEO, the APEX is planned as the second laptop series with compatibility for the OASIS liquid cooling system. In addition, an as-yet-unspecified XMG FUSION with Intel’s dedicated Arc graphics unit is also casting its shadow.

Pricing and availability information for XMG NEO 15 and XMG OASIS

Most popular stories on GeekWire for the week of May 15, 2022 – GeekWire

The best antivirus software for your PC