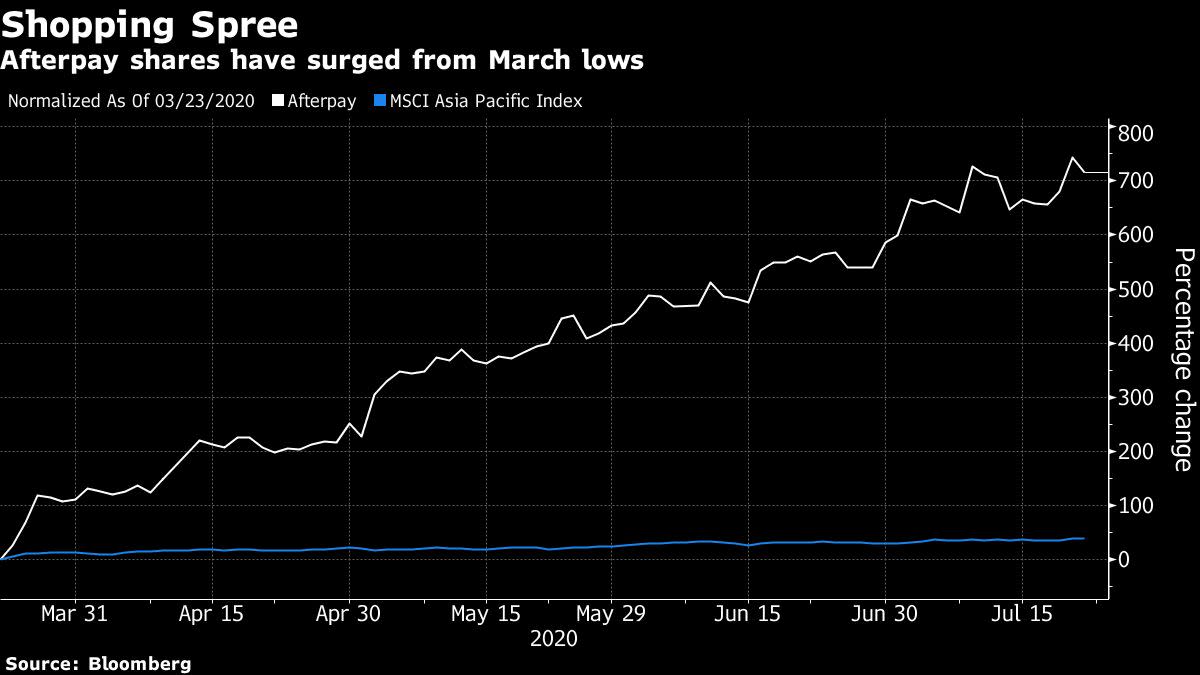 (Bloomberg) — The hottest stock in Asia since markets hit their nadir in March amid the peak of the coronavirus impact is an Australian payment company that is seeking to cash in on the global change in spending habits.

Installment payment platform operator Afterpay Ltd. has surged 715% to become the top performer on the 1,574 member MSCI Asia Pacific Index since the gauge’s March 23 low, according to data compiled by Bloomberg. Flowing government stimulus, a shift to digital payments and stuck-at-home shoppers have bolstered expectations for the firm as it expands across the U.S., U.K. and Canada.

While the stock’s valuation “seems challenging, we think it is warranted by the global buy now, pay later platform that Afterpay is building out,” the analysts wrote in a July 8 note. “We see greater adoption of e-commerce, given its accessibility and convenience, in a post-Covid world.”

Afterpay allows consumers to pay for purchases in increments, which is popular among millenial shoppers who’ve eschewed credit cards. Its emergence as an in-store option in the U.S. through the Apple and Google partnerships is likely to fuel further growth, Goldman Sachs Group Inc. analysts wrote in a July 20 note. A representative for Afterpay declined to comment on the stock’s share price performance.

Concerns about a second wave of the coronavirus globally may also prompt additional use of the platform, as some states in the U.S. halt reopening plans amid a spike in the number of confirmed cases. Australia, which last year accounted for three-quarters of Afterpay’s revenue, on Wednesday reported a record number of confirmed infections amid a surge in Victoria, the nation’s second-most populous state.

Still, the booming payments industry could face further regulatory scrutiny in the wake of the pandemic. The Reserve Bank of Australia last year said it would review sector policies, including its “no surcharge” rules. Unlike debit and credit card providers, operators of buy now, pay later platforms can block merchants from passing on the costs of using their services to consumers. Most platforms make money by imposing fees on businesses.

“Any change to this regulatory protection could drastically alter the existing business model of buy now, pay later operators,” said Yin Yeoh, a senior industry analyst at IBISWorld. The firms “have previously argued against industry regulation, however the surge in revenue growth exhibited this year may make regulation change more likely.”