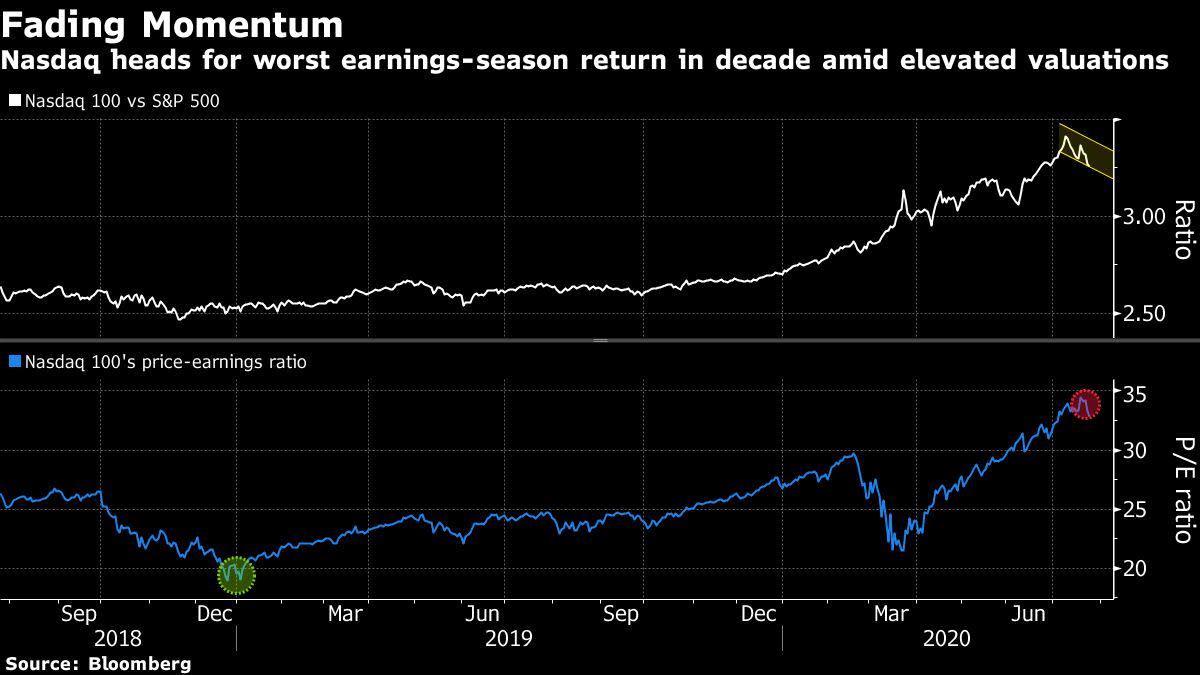 (Bloomberg) — Stock bulls who have spent four months shoveling money into an ever-appreciating group of technology behemoths are getting the worst news imaginable: there may be a limit to how big these companies can get.

Despite quarterly results that have been by many measures spectacular, stocks in the Nasdaq 100 are currently at risk of their worst relative return during earnings season in a decade, trailing the S&P 500 by 3 percentage points. Given how hard it’s been for bad economic news to hurt the group, the culprit would seem to be valuations, which at 33 times income are double levels just 18 months ago.

More than just a problem for tech investors, weakness in the group loosely collected in the FAAMG bloc is a threat to anyone who owns the U.S. stock market broadly, given the unprecedented influence internet and software stocks now wield. At 26% of the S&P 500, tech’s footprint is almost double the next biggest industry, health-care.

“Relative valuations matter, and tech is extremely stretched relative to other sectors,” said Dennis DeBusschere, head of portfolio strategy at Evercore ISI. “It’s tough to expect the market to hold up when tech is getting pummeled.”

The S&P 500 fell 0.3% over five days, ending a string of three weekly gains, as semiconductor and other computer-equipment makers tumbled. The Dow Jones Industrial Average slipped 0.8% while the Russell 2000 of smaller companies lost 0.4%. The tech-heavy Nasdaq 100 fared worst, dropping 1.5% to post its first back-to-back weekly loss since March.

Next week is apt to bring more drama, when Apple Inc., Facebook Inc., Amazon.com Inc. and Alphabet Inc. are scheduled to report earnings. Along with Microsoft Corp., these companies make up 22% of the S&P 500. That’s the largest representation ever recorded by the five biggest members since at least 1980, data compiled by Goldman Sachs Group Inc. show.

Thanks to solid balance sheets and a suite of products that benefit from social distancing, the FAAMG cohort has fared better during the pandemic-induced recession — in terms of profits and until the recent stock retreat. Going by analyst estimates, profits from the big five probably fell 19% in the second quarter, a pace that’s less than half the contraction forecast for the rest of the market, data compiled by Bloomberg Intelligence show. Moreover, the quintet is expected to return to their growth track in the current period, two quarters ahead of others.

But much good news has already been priced in. FAAMG stocks have rallied an average 29% this year, while the broad market is flat. In the month heading into the reporting season, the Nasdaq 100 had beaten the S&P 500 by 10 percentage points, the best pre-earnings performance since at least 2009.

“There are more pockets of the tech sector that are priced for perfection if not sainthood,” said David Sowerby, a portfolio manager at Ancora Advisors. “The bar has gotten meaningfully higher.”

Simply beating estimates is not enough to sustain the momentum. Earlier this week, Microsoft reported earnings that exceeded analyst forecasts, and its stock sank 4.4%. Such a pattern has played out across the industry. Among tech firms that reported, all exceeded profit forecasts, but their shares fell an average 1.1% on the first day, the second-worst reaction among the 11 main industries, data compiled by Bloomberg show.

“People have taken a ruler, and with tech companies, growth companies, they put the ruler down and drew a straight line up. We think that’s wrong,” Wells Fargo & Co.’s strategist Chris Harvey said in an interview on Bloomberg Television. “We want people to start taking profits from your uber-caps and from your momentum names, and cycle back in some economic sensitive names because that’s what we think the real mispricings are.”

A rotation has begun to take shape as money flows to laggards such as energy, financial and small-cap stocks. Whether that’s enough to make up for any further losses from tech giants is another question. Just consider: without the FAAMG, the S&P 500’s 0.5% loss for 2020 would have widened to 5.4%.

That a handful of stocks have accounted for so much upside means the market is vulnerable to any idiosyncratic shock to these companies, according to Goldman strategists led by David Kostin. Based on the firm’s calculation, if the FAAMG stocks declined by 10%, in order to keep the market trading flat, the bottom 100 S&P 500 stocks would have to rise by a collective 90%.

“The S&P 500 has never been more dependent on the continued strength of its largest constituents,” Kostin wrote in a note. “From the perspective of a macro investor, record market concentration represents a risk to aggregate index performance.”