The activist investment firm in the news earlier this year for ousting existing Exxon board members in favor of its own environmentally focused replacements has spoken out in favor of GM’s transition towards electric vehicles. Engine No. 1 believes that GM has the means to successfully lead the combustion engine industry in its transition to electric vehicles, reports The Wall Street Journal.

Engine No. 1 recently released a white paper that comes out in favor of traditional car manufacturers as the way forward into an electric vehicle world. These auto makers have the familiarity with large scale production and are well-established companies that know how to push for electric vehicle transitions successfully.

“The scale of the [electric vehicle]  transition challenge is beyond what Tesla and other new entrants can surmount in the time frame needed” to significantly reduce tailpipe emissions, the firm wrote. “Incumbent auto makers…are fully capable of becoming central players in the transition to [electric vehicles]  and are also fully motivated to do so.”

Engine No. 1 has said that it has had “very constructive and collaborative two-way conversations with GM,” and the activist investment’s founder Christopher James believes that GM is well-positioned with a lead on battery technology that will facilitate the transition to electric.

GM aims to have most of its fleet be electric by 2035, working to phase out its gas- and diesel-powered car offerings. With GM angling to be ahead of competitors, it would give them a chance to increase market share and get a leg up on the rest of the industry. Many of the other major auto makers have made similar voluntary pledges alongside President Biden to have half of all new fleets be electric by 2030.

The current route that GM has gone is the way of plug-in vehicles, which are typically more expensive because of the cost of the batteries. In June, the company said that it aims to spend $35 billion in the transition to plug-in vehicles through 2025. GM’s singular electric vehicle, the Chevrolet Bolt, was recently recalled for battery replacements as the existing battery packs were catching fire.

Tesla is also given recognition by the activist investor for its early entry into the field and for advocating for electric vehicle adoption with its offerings. Engine No. 1 believes, though, that the existing electric vehicle companies and start-ups will not be enough to turn the tides on emissions, and that it’s going to be a change that happens effectively from within the existing combustion engine industry, led by companies such as GM.

Engine No. 1 Invests in Change 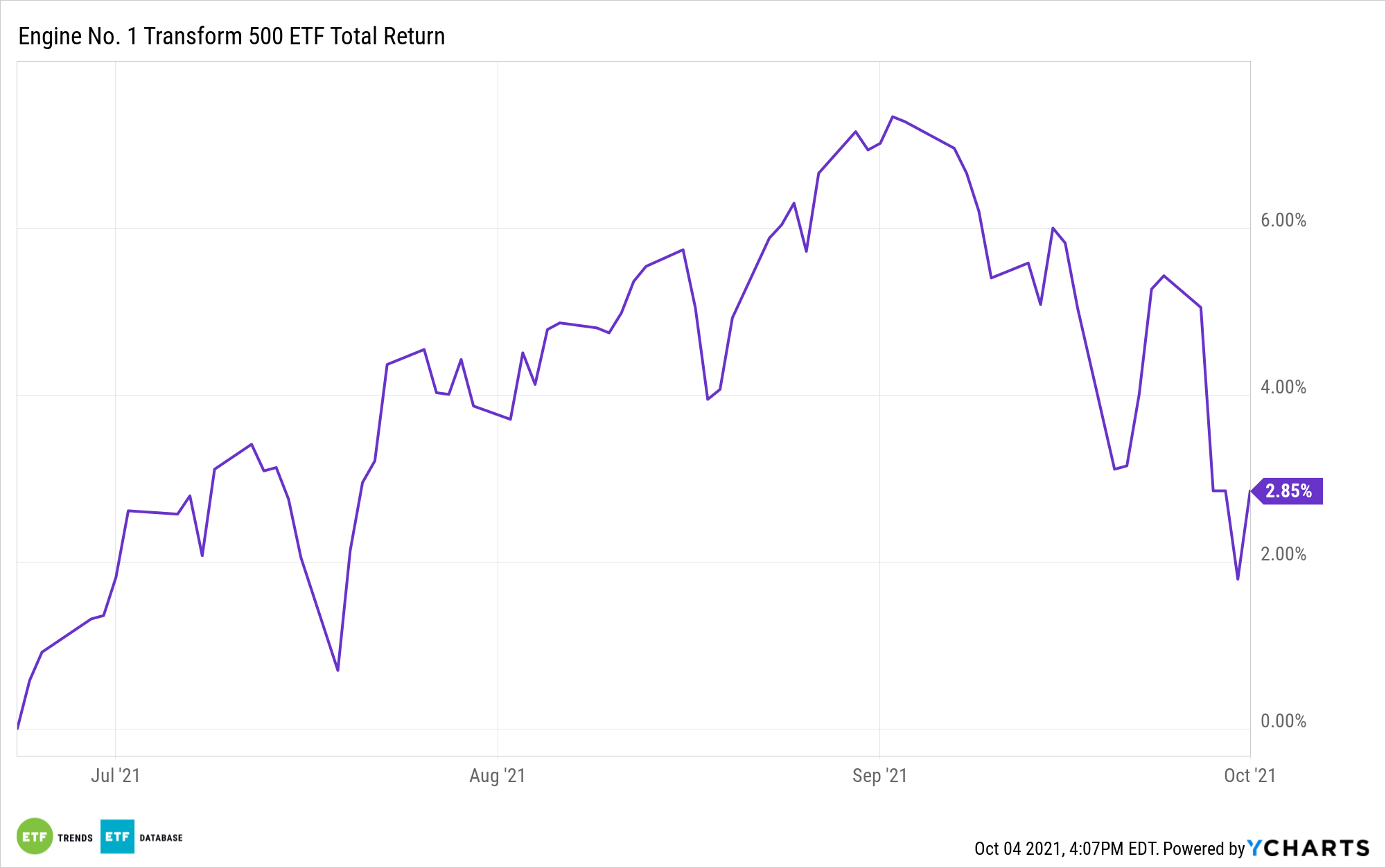 The Engine No. 1 Transform 500 ETF (VOTE) invests in 500 of the largest public stocks in the U.S. and believes in the power of investors to bring about change in these companies.

The fund tracks the Morningstar US Large Cap Select Index, which follows the largest 500 companies by market cap across all industries and encourages change within the companies by engaging in proxy voting guidelines as well as dialogue with the leadership of each company invested in. In addition, the advisor measures the ESG metrics of companies using a wide variety of data including wages, workforce diversity, carbon emissions, land use, and other metrics. The proxy voting guidelines are built around the ESG metrics and apply to all the companies within the fund.