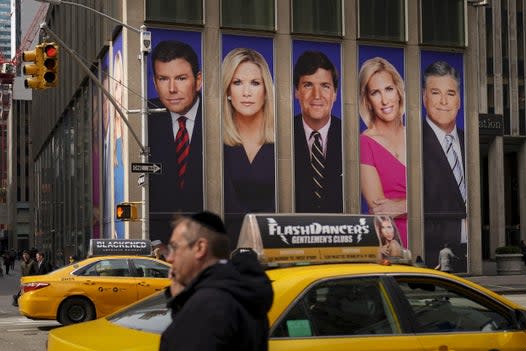 A former Fox News host has been accused of rape in a lawsuit that also accuses some of the broadcaster’s biggest names – including key allies of Donald Trump – of sexual harassment.

In a lawsuit filed on Monday in New York, Jennifer Eckhart, a former producer at the network, accused Ed Henry of rape and sexual harassment. Mr Henry was fired earlier this month over claims of “sexual misconduct”.

Fox News denies Ms Areu’s allegations and said in a statement that both plaintiffs can pursue their cases against Mr Henry directly with him, as he is no longer employed by the network.

The suit alleges that Mr Henry used his seniority to groom and manipulate Ms Eckhart, who is approximately half his age, into a violent sexual relationship. He is accused of sexually assaulting her on office property, and in 2017 physically restraining and raping her at a hotel where Fox News lodged visiting employees, leaving her injured.

The suit says that he kept explicit photos of her that were taken without Ms Eckhart’s consent prior to that assault. Included in the suit are demeaning text messages reportedly sent by Mr Henry that include further demands for violent sex.

Mr Henry was fired by Fox News on 1 July for “willful sexual misconduct” a week after Ms Eckhart informed the network of the alleged rape.

The suit alleges that Fox News had been aware of Mr Henry’s misconduct as long ago as 2017 when there was a company-wide investigation into sexual harassment and multiple women came forward with complaints about his conduct.

He had previously been suspended for four months in 2016 after an affair with a Las Vegas stripper was revealed by the media. However, when he returned to the network he enjoyed new opportunities and promotions.

A Fox News spokesperson also said were no sexual harassment claims against Mr Henry at Fox News prior to Jennifer Eckhart’s claim on 25 June, 2020.

Ms Areu’s allegations against Mr Henry include that he sent her multiple sexually graphic images and messages in early 2020 and alleges that he implied that he would help her become a full-time employee at the network as an anchor if she had sex with him. She has never been a Fox News employee, but was a regular contributor to several shows for a 12-year period from 2008.

In addition to Mr Henry’s alleged misconduct, the suit claims Ms Areu was subjected to a misogynistic incident on set by Mr Hannity in which he offered $100 for a member of the crew to go on a date with her. When she didn’t “play along” she was rarely invited back to appear on his show, the suit alleges.

Ms Areu also frequently appeared on Mr Carlson’s show until an incident in December 2018 when she alleges he propositioned that she come to his hotel room, and she declined. She was only booked onto his show three times after that.

She says she also turned down sexual advances from Mr Kurtz, host of the show Media Buzz, refusing to meet him at his hotel; and Mr Caldwell, who the suit claims pursued her for a date in exchange for an introduction to conservative pundit Ann Coulter.

In a statement, Fox News denied all of Ms Areu’s allegations: “Based on the findings of a comprehensive independent investigation conducted by an outside law firm, including interviews with numerous eyewitnesses, we have determined that all of Cathy Areu’s claims against Fox News, including its management as well as its hosts Tucker Carlson, Sean Hannity and Howard Kurtz and its contributor Gianno Caldwell, are false, patently frivolous and utterly devoid of any merit.”

In regards to Mr Henry, as a former employee, the statement continues: “We take all claims of harassment, misconduct and retaliation seriously, promptly investigating them and taking immediate action as needed — in this case, the appropriate action based on our investigation is to defend vigorously against these baseless allegations. Ms Areu and Jennifer Eckhart can pursue their claims against Ed Henry directly with him, as Fox News already took swift action as soon as it learned of Ms Eckhart’s claims on June 25 and Mr Henry is no longer employed by the network.”

Bill O’Reilly, once a star on the network, left in 2017 after a New York Times investigation uncovered payments to women to settle their complaints of sexual harassment.

Monday’s suit claims that nothing has changed at the company since those incidents, even saying that “it is actually worse” since the days of Mr Ailes.

“Some of the names in leadership may have changed since Roger Ailes’ regime, but Fox News’ institutional apathy towards sexual misconduct has not.”

Ms Eckhart and Ms Areu are represented by Douglas Wigdor, a prominent workplace harassment lawyer who has sued Fox News on previous occasions.

A statement from Mr Henry’s legal team at Morvillo Abramowitz Grand Iason & Anello PC, reads: “The Me Too movement has helped to bring to light a number of injustices in our society, and everyone that has suffered deserves to be heard. This is not one of those cases. The evidence in this case will demonstrate that Ms Eckhart initiated and completely encouraged a consensual relationship.”

It continues: “Ed Henry looks forward to presenting actual facts and evidence, which will contradict the fictional accounts contained in the complaint. That evidence includes graphic photos and other aggressively suggestive communications that Ms Eckhart sent to Mr Henry.”

Sean Hannity says he may run for president: ‘You never know!’