Alongside several PC announcements from Microsoft’s Surface event, the tech giant revealed a second iteration of its dual-screen Duo smartphone, the Surface Duo 2.

In PCMag’s review of the original Surface Duo, we lauded the hardware itself, as well as the ambition of the concept, but noted a litany of prominent software bugs and an awkward layout. In its second crack at the design, Microsoft is hoping the introduction of Android 11, as well as a year of R&D, will improve the experience. 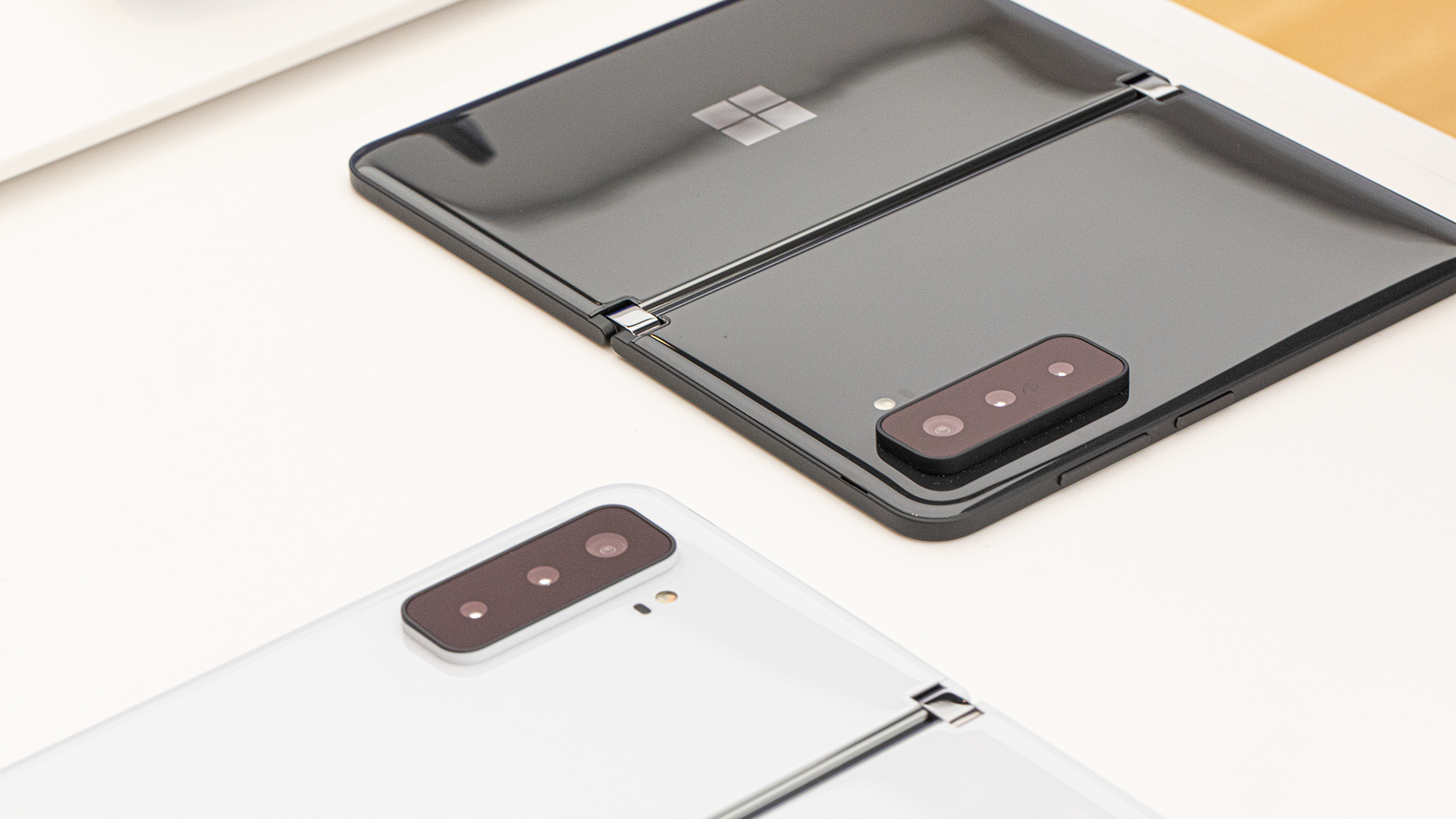 We briefly checked out the Surface Duo 2 in a preview event in New York following the company’s Sept. 22 livestream, alongside the new Surface PCs, including the Surface Laptop Studio. I chiefly review laptops for PCMag, but as our representative at the event, below are my off-the-cuff impressions (including a brief video). Our mobile analysts will chime in with much, much more to say in their full review when they receive a formal review sample.

Impressive Hardware, But It’s All Down to the OS

The main takeaway (as someone who didn’t get to spend much time with the original Surface Duo) is that the quality of the hardware and the new features Microsoft demonstrated made me hopeful that, this time, the device will be successfully executed overall. The build quality of the Duo 2 is great, and it’s extremely attractive with its various shiny color options. But a good smartphone leans heavily on its software, and discerning if it’s a smooth user experience takes more time than the very brief in-person slot we were allotted with it on Sept. 22.

Some context there if you need it: For most phones, leaning on iOS or Android takes care of the user-experience problem, as Apple and Google have gotten quite good at making operating systems. Their years upon years of cumulative refinements are massive factors, at this point. However, Android phone makers often use their own OS skins on top of the “pure” version of Android, which often introduces new (and sometimes polarizing) UI elements or features on top of Android itself. This is all expected in 2021, but that dynamic gets a lot more complicated when you introduce unique form factors that the phone maker must adapt the software around. Prime example: twin screens separated by a hinge. 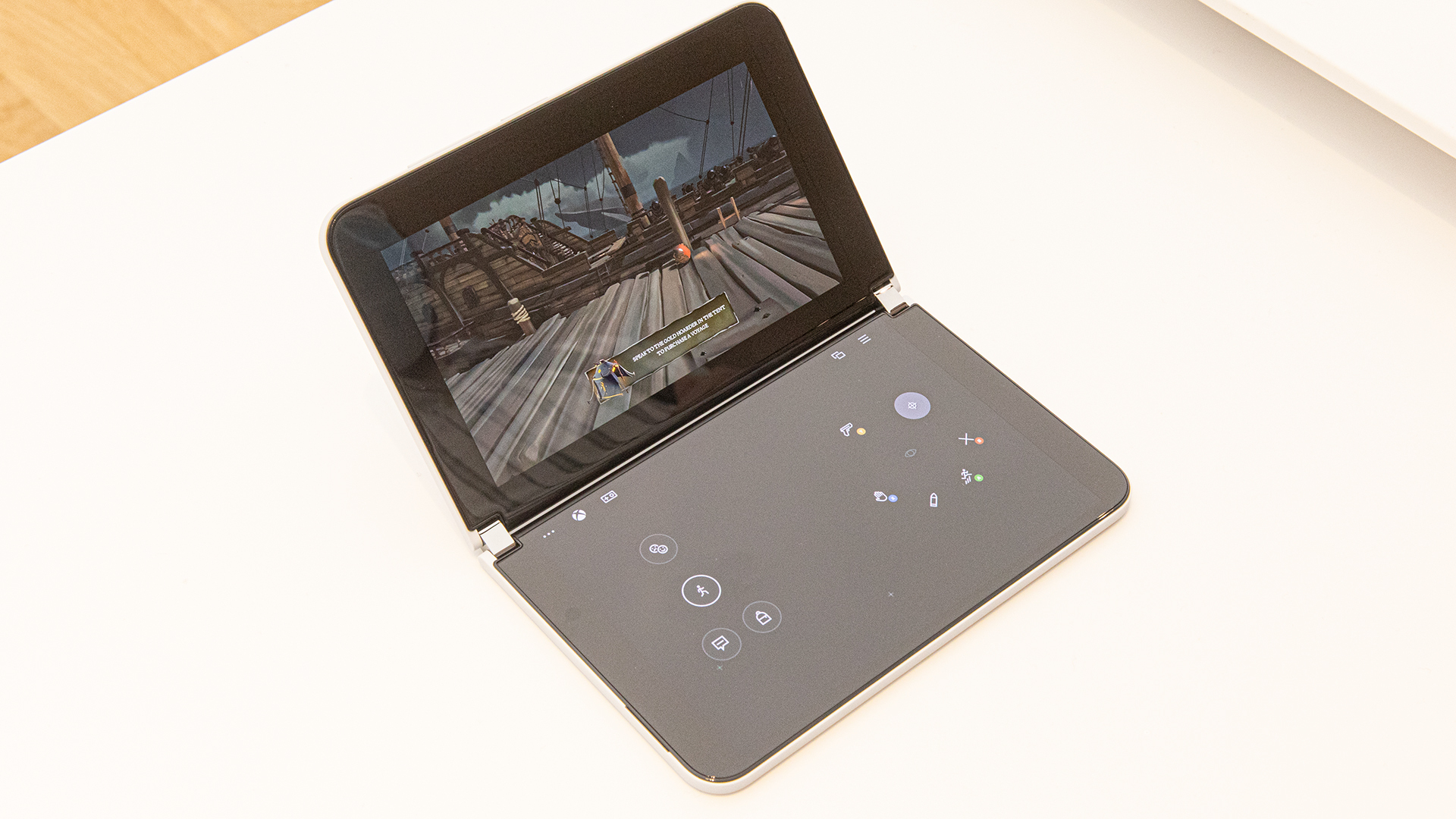 The OS needs to keep up and work in conjunction with the physical design, and as detailed in our review, the original Duo fell short here. Between the design and a buggy experience, it missed the mark, so the sequel definitely has something to prove. 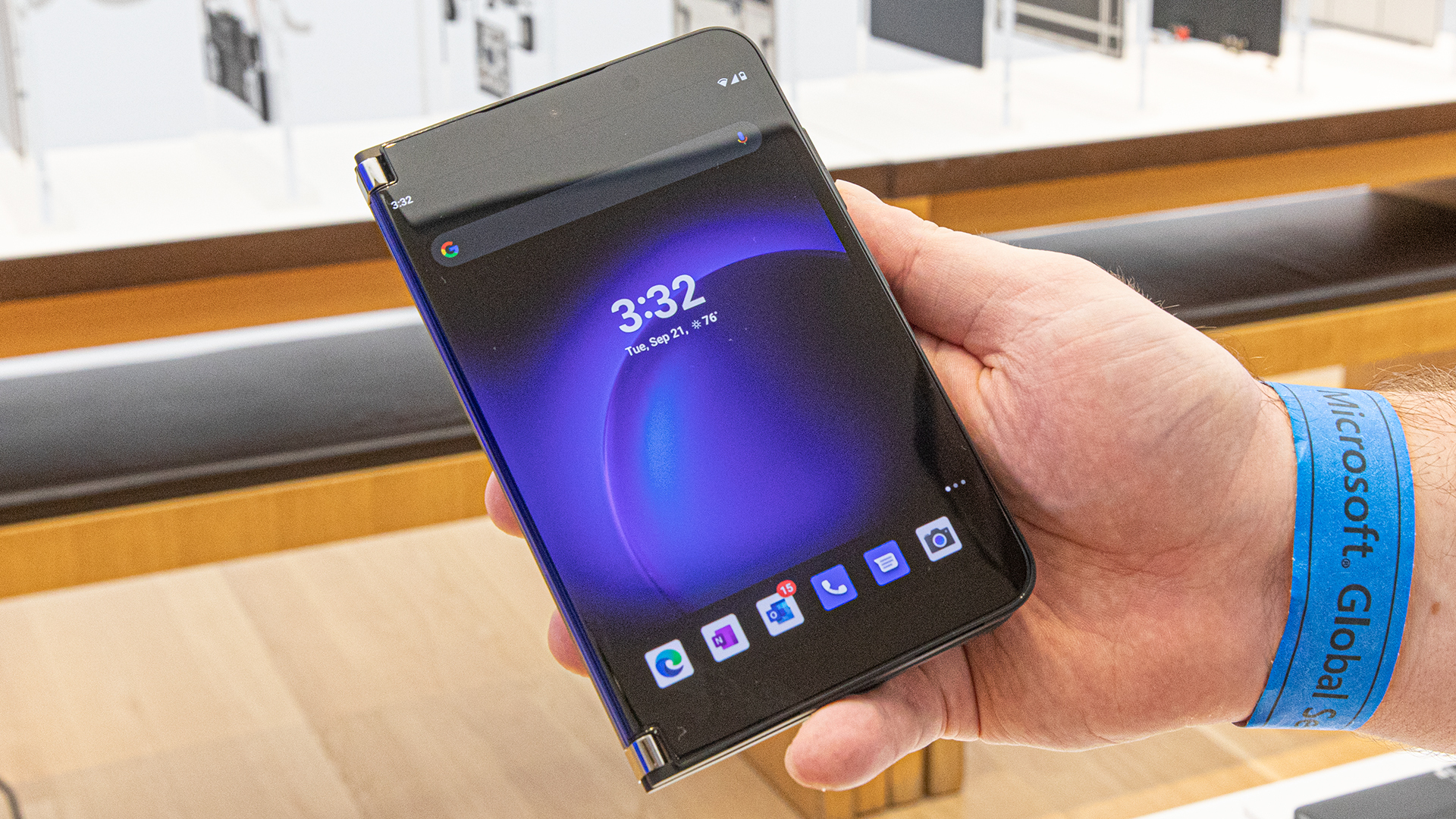 The Duo 2 screen hinge can also rotate all way around to show just one screen at a time, in classic smartphone style.
(Photo: Molly Flores)

One thing to note: In the time since the original’s debut, the Surface Duo 2 has gained the benefit of several other dual- and folding-screen designs entering the market, and so Android has had to adapt.

In my time with the Duo 2, a Microsoft representative ran me through several demos, and talked up the capabilities of Android 11 to make this a better experience. The camera and photo app makes use of both displays intelligently, and the picture quality (plus improved triple lenses, giving you wide, telephoto, and ultra-wide) looked strong, but there wasn’t much of a chance to study them closely or take test shots.

The rep also pointed out the second screen can be used as something of a built-in kickstand or tripod, and with the wide lens, you can place the phone down and capture a full scene with yourself in it. 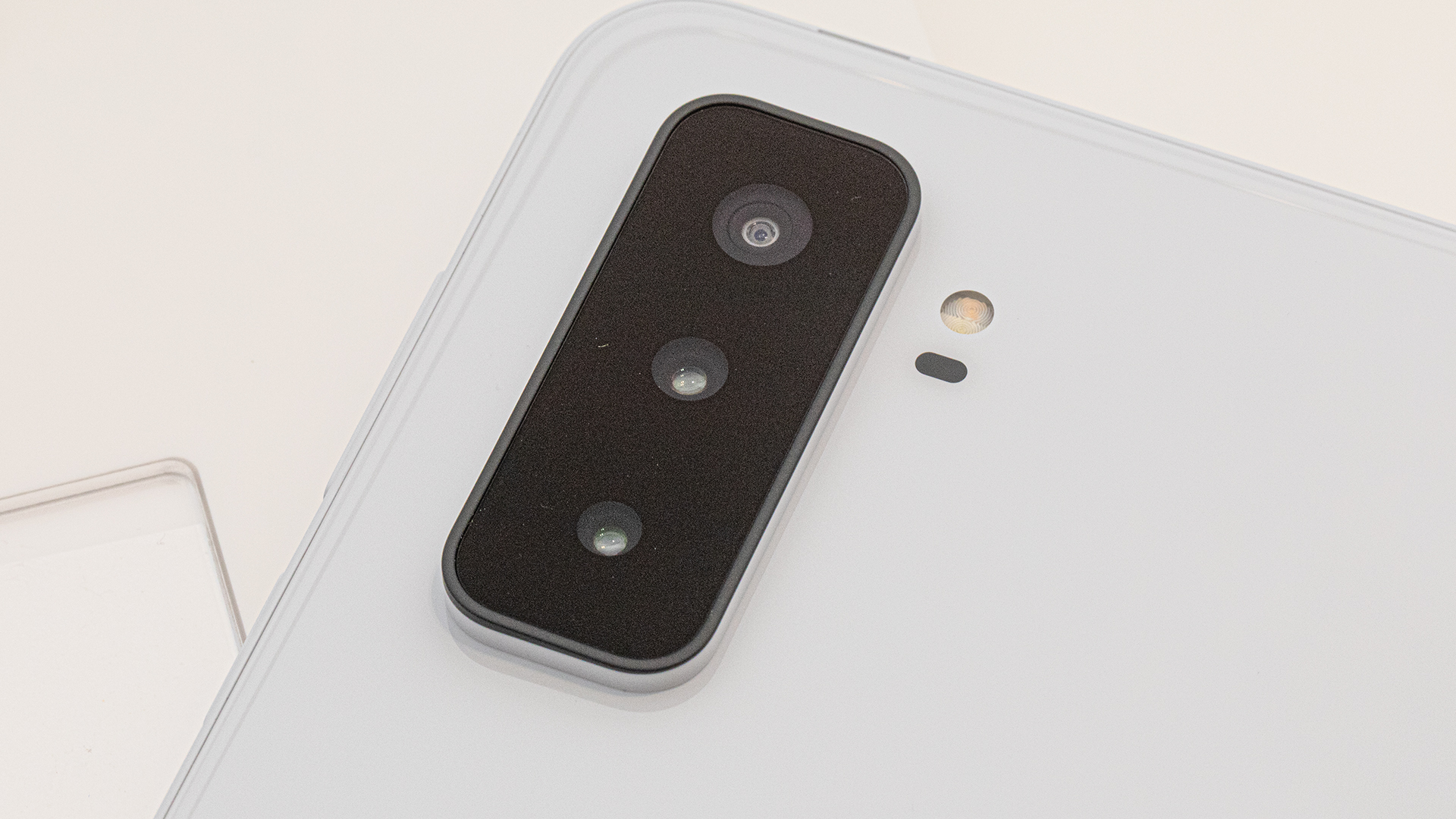 A close-up of the lens system
(Photo: Molly Flores)

The camera on the original Duo was one of our main points of criticism, so this new camera has a big chance to win back points, and the new array looks like an improvement, from what we could see of sample photos onscreen. Of course, we’ll need to take a lot more photos ourselves, under controlled conditions of our choosing, before rendering any kind of verdict.

Additionally, there’s a new notification system that can show you call and other informational icons on the edge of the screen when the phone is closed. It looks very cool in practice, and it feels like the future. This isn’t the first time we’ve seen something like this with a curved-display smartphone, but having it visible when the phone is closed felt different. Plus, it partly hides your notifications from public view, if that kind of circumspection matters to you. 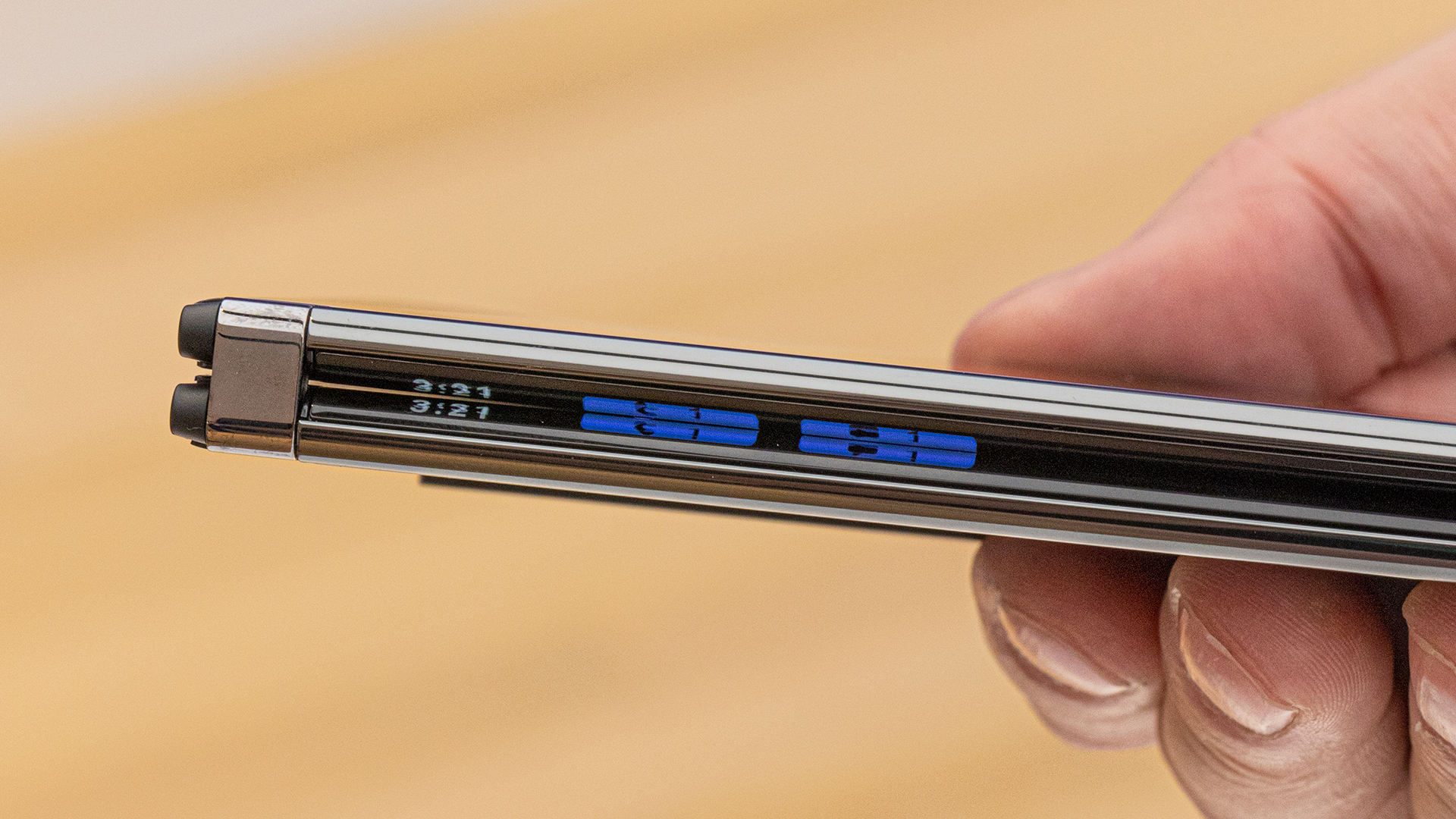 Speaking of which, the twin curved displays are new, and larger than the original by 0.2 inch, at 5.8 inches on the diagonal each. They look pin-sharp and very roomy, and the curved design complements the fold and the hinge, as the phone closes at a tighter possible angle. When a video was displayed across both screens, the hinge was an easy interruption to ignore, with only a sliver of a gap between the two panels. 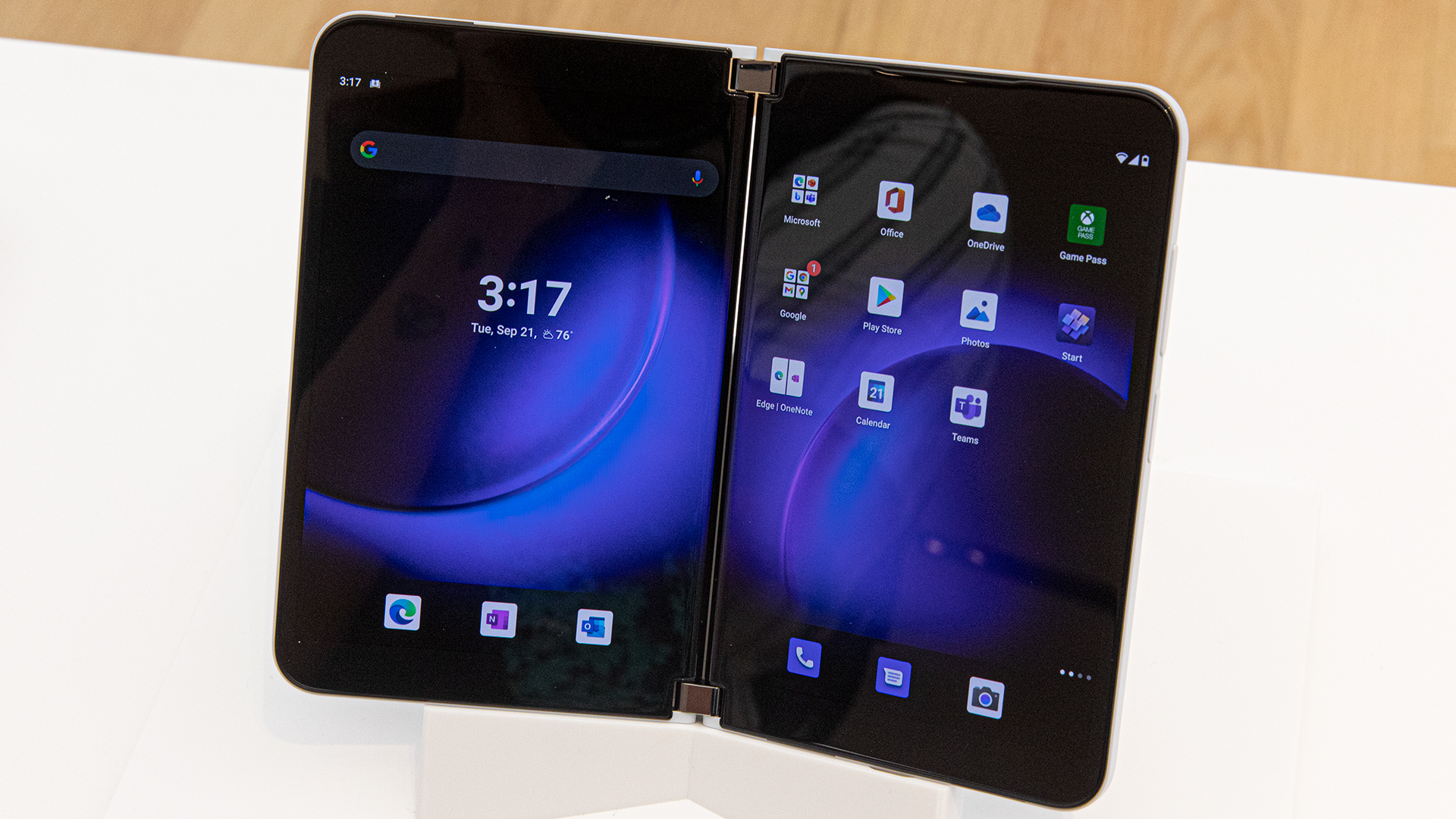 Appearances, thus, were strong. But that’s the issue with taking a quick look at a smartphone alongside a minder: A quick demo is a lot different from living with the device all day—not to mention, using it with urgency in lots of different places. Navigating the OS smoothly and watching for bugs will take more time than this demo event allowed, even if I was encouraged by what I saw.

One further thing I was encouraged by, though: snappy-feeling response to typical onscreen actions. In addition to the new cameras, the Duo 2 will support 5G with a robust Qualcomm Snapdragon 888 processor. (Another prominent foldable, the Samsung Galaxy Z Fold3 5G, also uses the 888. See our review at the link for an idea of its relative performance.) For a full rundown of the Duo 2’s specs, features, and additions, see our original news story. 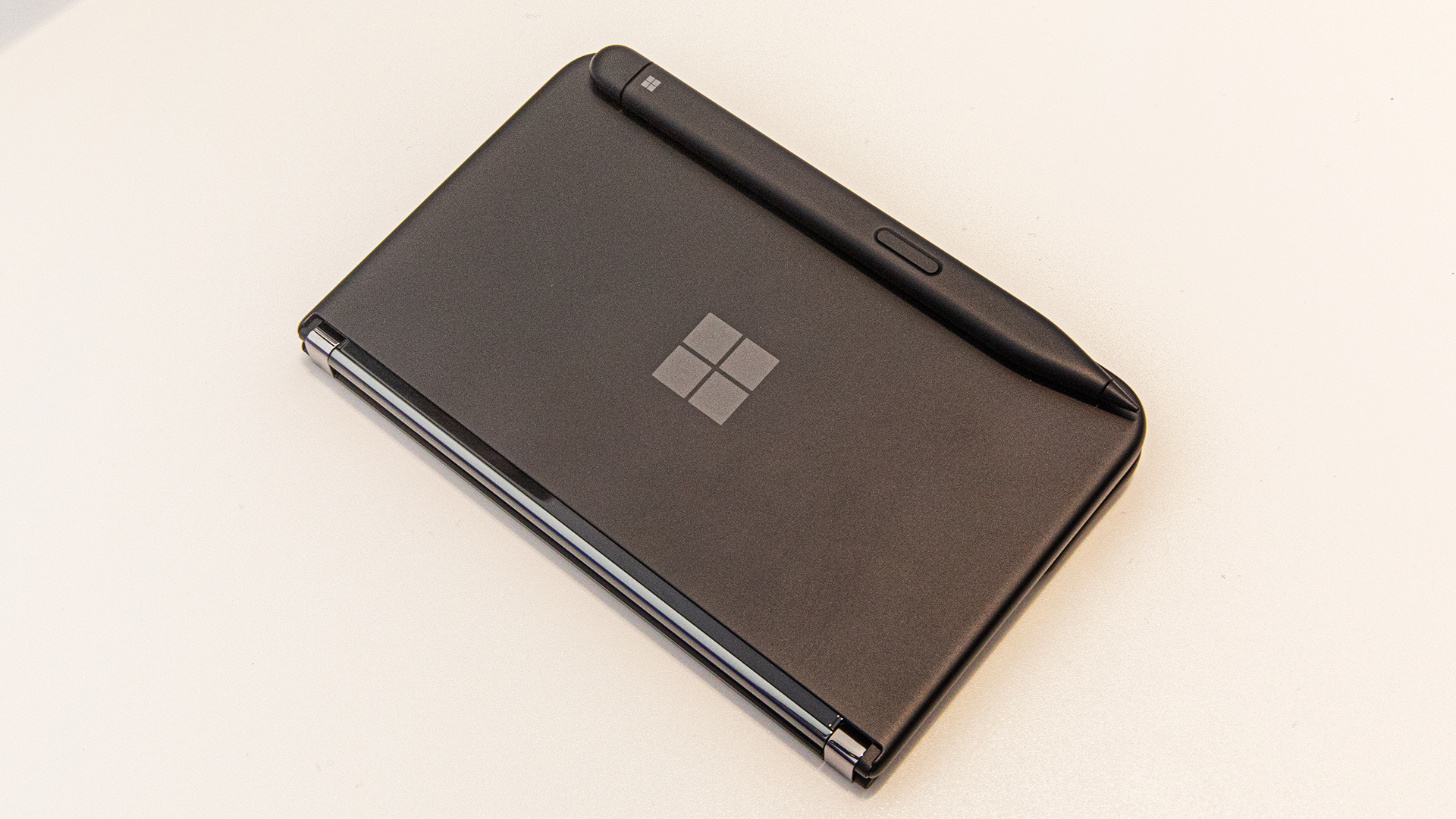 Given that taking a gamble on the Duo 2 will not come cheaply at $1,500, do check back for the full verdict to see if Microsoft succeeded on the usability of this much-anticipated second take.

Sign up for Race to 5G newsletter to get our top mobile tech stories delivered right to your inbox.