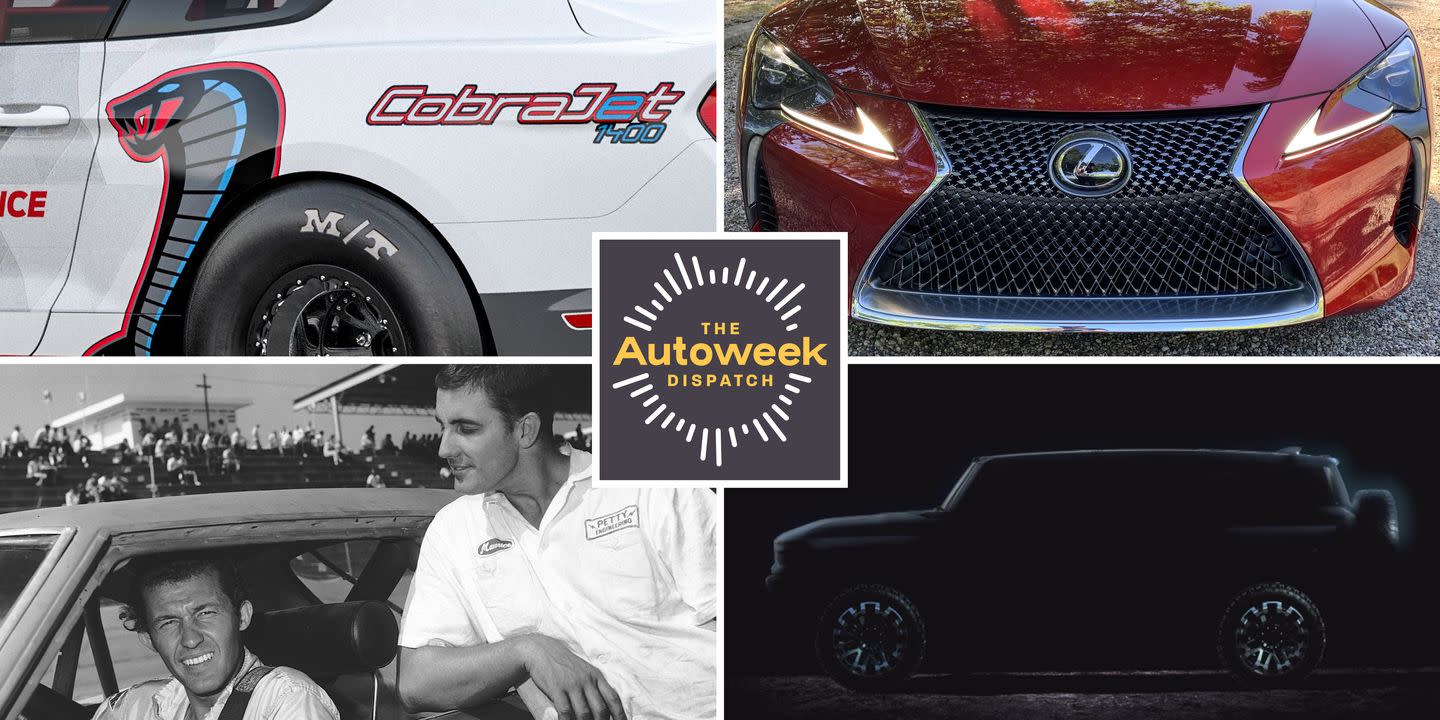 The NHRA’s Labor Day weekend race just got a whole lot more interesting and, perhaps inevitably, the lawsuits might be starting to fly over canceled Formula 1 races. Here’s what’s happening in the car world:

QUOTE OF THE WEEK

“The well-being of our fans and competitors and workers is the most important responsibility we have at IMSA. And we’ll do everything we can to ensure that—and put on a good show.”

—IMSA WeatherTech SportsCar Championship series president John Doonan, talking to Autoweek about this weekend’s race at the legendary 4-mile Road America track. Road America’s wide-open spaces are good for fans to practice social distancing. Thanks to the You Know What this year Doonan has had to implement schedule changes, high-level layoffs and the almost-certain delay of the new LMDh prototype car (Le Mans Daytona hybrid) for at least a year. This weekend IMSA is hoping for a healthy crowd—in more ways than one.

FROM THE EDITOR’S DESK

Ford’s electric Cobra Jet 1400 has been on my mind ever since the company showed it a couple months ago. Fourteen hundred horsepower and 1,100 lb-ft will do that. Ford sources tell me in private testing the beast has made quarter-mile runs in the “low-eight-second range.” So thinking about that and Chevy’s eCOPO Camaro I wonder how long before the National Hot Rod Association creates a class for these monsters, and whether the automakers would play?

So we called Ford, Chevrolet and the NHRA.

Ford sources told Autoweek the company intends to hold the car’s first public exhibition runs at the NHRA’s U.S. Nationals Labor Day weekend in Indianapolis. Another source told us an announcement about that is coming soon. “We are testing and testing,” a source told us. “The hardest thing is getting the power down smoothly at launch.” He also said “if the NHRA came up with a class for EVs we would certainly look into doing customer versions of the Cobra Jet 1400.”

Chevrolet introduced the eCOPO concept at SEMA in 2018 and has done demonstration runs at a few NHRA events. Chevy sources didn’t come out and say they’d do customer cars but did say the concept was well received and generated a lot of interest. “We’re still working on potential eCrate concepts,” a source told us. “We continue to explore what’s possible.”

NHRA sources told us the sanctioning body worked with Chevrolet and is also working with Ford on the Cobra Jet 1400. “These vehicles can be raced in NHRA ET Bracket classes right now,” he told us, “and we would certainly consider using them in various NHRA categories.”

He said the NHRA would need to better understand the EVs’ performance and safety parameters “before we could put them in their own category.

“We have numerous meetings with the manufacturers regarding various forms of drag racing and we’ll continue to do that as the development continues down the path,” our NHRA source told us.

When we suggested this kind of racing could some day be a big deal he said, “I mean, Top Fuel didn’t exist at one point, so who knows what could come out of it?”

GM enlisted basketball megastar LeBron James’ help to reveal a little more about its coming Hummer electric trucks in the form of a one-minute video. The video revealed two profile silhouettes of the coming Hummers, GMC’s all-electric pickup and SUV due for production in fall 2021. We should get a look at the trucks this fall. There will be one-motor, two-motor and three-motor versions.

I don’t know whether to laugh or cry: Become one of the 40 people to own an Essenza SCV12 and you don’t get to take possession. Lamborghini is keeping it in a garage in a hangar. The garage has a camera mounted so you, the owner, can look at your car in the garage, in the hangar, via an app (I’m not kidding). Then starting sometime next year Lamborghini will host several arrive-and-drive events where you can lap your 830-hp V12 monster at top level or “FIA Grade 1” racetracks. Blimey!

The SEMA Show and the Consumer Electronics Show are taking different approaches to how they deal with COVID-19 regarding their Las Vegas events. SEMA’s going ahead with business not quite as usual for its annual convention Nov. 3-6, with attendees present and circulating in the Las Vegas Convention Center’s three huge halls. CES organizers, meanwhile, announced they’re going all-digital for their upcoming show Jan. 6-9.

Sigh, I suppose this was bound to happen: Formula 1 race promoters in Brazil and Mexico are considering suing Liberty Media over their canceled 2020 races. Tamas Rohonyi, promoter for the race at Interlagos near Sao Paulo, told O Estado de S.Paulo newspaper that F1’s owner canceled for unjust reasons. “The contract can only be canceled for reasons of force majeure,” he said. “That is something that is out of the control of the parties involved, like a plane falling on the cars or that we are all a meter under water.” F1, however, said it canceled all races on the American continents, including the U.S. Grand Prix in Austin and the Canadian Grand Prix in Montreal, because of the coronavirus pandemic. Rohonyi says the cancellation costs him and race organizers “millions.”

Racing lost a good one when NASCAR Hall of Fame engine builder Maurice Petty died at age 81. He spent his career helping his brother Richard to seven Cup titles and a never-to-be-topped 200 wins. I like the way NASCAR CEO Jim France put it when he said, “The Chief was one of the most talented mechanics in NASCAR history and provided the power that helped Petty Enterprises define dominance in sports.” Indeed, he’ll be remembered as one of the best to ever build powerplants in NASCAR.

Robin Warner has been styling in the 2021 Lexus LC500 convertible and calls it perfect for an old-school wind-in-your hair grand touring trip. The 5.0-liter naturally aspirated V8’s 471 hp could definitely make touring possible on a grand scale!

Buying a Lamborghini can be special time in one’s life even if sometimes the purchase comes with some hefty maintenance costs. But like David. T. Hines found out a Lambo can cause bigger problems than just an engine-out service. According to USA Today, Hines was charged with one count of bank fraud and another count of making false statements to a financial institution. Oh yeah, and one count of engaging in transactions in unlawful proceeds. What’d he do? He allegedly applied for Paycheck Protection Program loans on behalf of multiple companies and misappropriated the money by using it to, well, buy a Lamborghini Huracan Evo. The allegations also include using the money to purchase other luxuries, like resort stays, clothes and jewelry. Don’t be like Hines!

On this episode of the Autoweek Podcast, Episode 120, Wesley Wren and Wes Raynal talk the possibility that Mercedes is thinning its car lineup and axing the coupe and convertible variants of its main lineup. The pair also talks about the restrictions surrounding the Lamborghini Essenza SCV12 and how you can nab one. After the break, Mike Pryson speaks with Steven Cole Smith about the IMSA season and the news that Acura is leaving Team Penske after the season ends, as well as the status of the GTLM class without Porsche in its ranks and Porsche possibly moving up to IMSA’s prototype class.

Tune in here, on Spotify, Apple Podcasts, Stitcher or wherever podcasts are played.

As always we’re on the case this weekend, monitoring and reporting on automakers’ and sanctioning bodies’ latest happenings. We’ll continually update the site of course—you’ll know what’s happening when we do. Check back often!

Thanks for reading Autoweek and please stay safe.