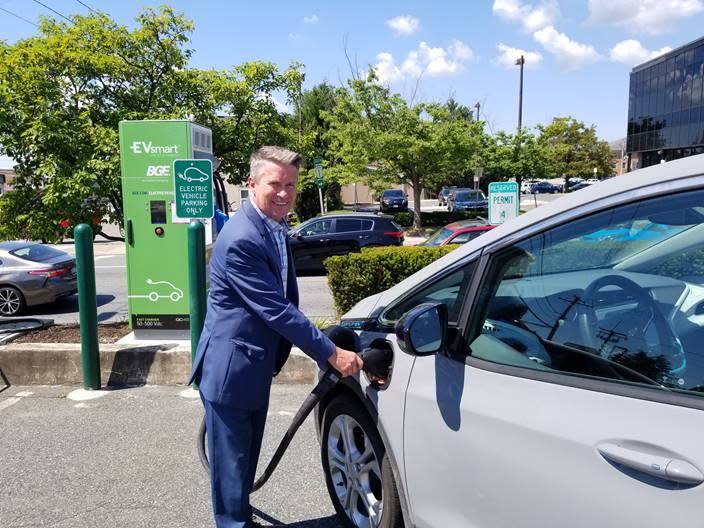 BEL AIR, MD – Drivers of electric cars who find themselves out and about more as coronavirus concerns loosen are now able to charge their vehicles at six stations that can be found at Harford County properties in Bel Air and Fallston, county officials announced on Thursday.

Baltimore Gas and Electric installed the stations earlier this year at no cost to the county to provide electric vehicle drivers with 24-hour-a-day, seven-day-a-week access to them.

The six stations on Harford County properties are part of Exelon’s EVsmart charging network among Maryland utilities, including BGE, Pepco and Delmarva Power. BGE owns, services and monitors the stations.

Two fast chargers are located at the Harford County Government administration building, which is located at 220 S. Main St. in Bel Air in the southwest corner of the parking lot. The other is located at the intersection of Baltimore Pike and South Bond St, and both stations will have a vehicle at full power in about 30 minutes.

The four Level 2 stations, with two chargers on each, have been installed at the Veronica “Roni” Chenowith Activity Center in Fallston. It takes about four hours to fully charge an electric vehicle.

Harford County government owns one electric vehicle, a 2019 Chevy Bolt, county officials announced in a press release Thursday. It costs about $20 to fully charge the Bolt using the fast charger, which can be driven about 230 miles on a single charge.

“We’re proud to join the network of charging stations for EV drivers in Harford County and support clean energy solutions to protect our environment,” County Executive Barry Glassman said in the news release.

This article originally appeared on the Bel Air Patch