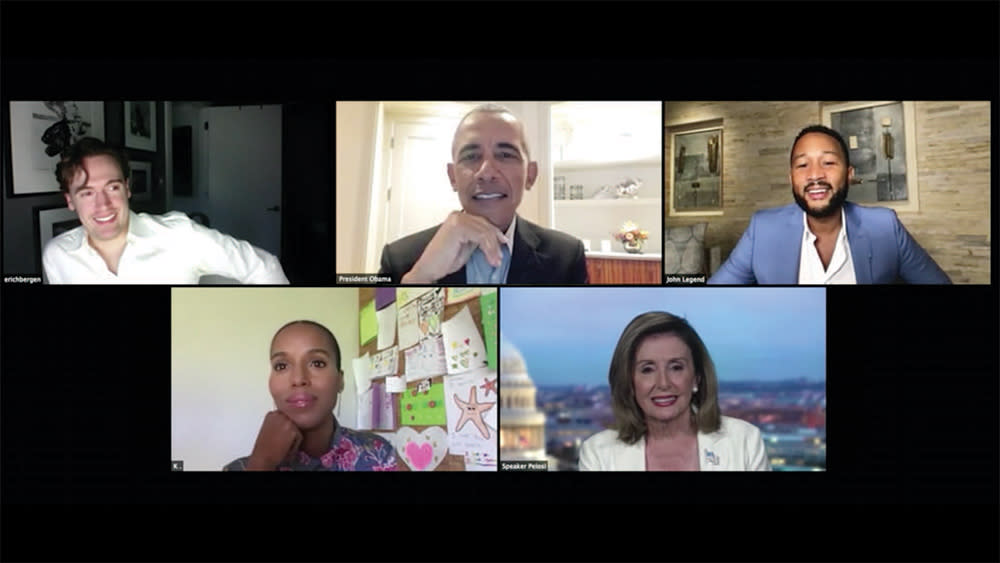 Erich Bergen was staring at his computer screen on the desk in the bedroom of his Harlem apartment. In a couple minutes, the July 21 final installment of Nancy Pelosi’s virtual Hold the House fundraisers for Democratic congressional candidates was going live.

Bergen had a quick decision to make. “There was a moment when I was like, ‘Can I tell the president that he needs to be lit better?’” he tells Variety, laughing. “But then I realized, ‘Yes, the president would probably like someone to tell if his lighting was bad.’”

Bergen unmuted himself and asked Obama if he would please shift in his chair for a better shot. The former commander-in-chief obliged and moved closer to his camera.

These are the kinds of things Bergen has to think about since becoming one of Hollywood and New York’s most in-demand producers of virtual events.

Until COVID-19, the 34-year-old New York native was an actor and a singer, best known for his role as Blake Moran on the CBS drama “Madam Secretary.” That job ended when the show went off the air in 2019 after six seasons.

When the coronavirus outbreak morphed into a pandemic, Hollywood productions ground to a halt and Broadway, where Bergen starred in “Waitress” during separate runs in 2018 and 2019, was closing down. “The first thing I thought of were all of my friends who are going to be out of jobs,” Bergen says. “And then I thought of The Actors Fund, which when I was living in Los Angeles years ago helped me out when I didn’t have enough money to pay the rent. I thought, ‘I have to do something for The Actors Fund because if this pandemic really does last for a month, they are going to be inundated with requests for help.’”

At the time, Bergen didn’t know Rosie O’Donnell, but they followed each other on Twitter. Bergen sent her a message explaining that he had an idea to re-create her ’90s talk show as a virtual one-night-only benefit for The Actors Fund. “She wrote me back, ‘If you put it together, sure,’” Bergen says. “And I was like, ‘Great.’ And then I was like, ‘Oh, no. I have no clue what I’m doing.’”

But he proved to be a quick learner. On March 22, “The Rosie O’Donnell Show — A Live Benefit for The Actors Fund” raised $700,000, with Zoom appearances and performances by Billy Porter, Patti LuPone, Lin-Manuel Miranda, Idina Menzel, Brian Stokes Mitchell, Andrew Lloyd Webber and Barry Manilow.

O’Donnell was impressed. “He is remarkably good at producing Zoom TV shows,” she tells Variety. “It was his idea to do the ‘Rosie’ show, and he planned the whole thing.”

Bergen had no aspirations to become a full-time producer. “For Rosie, I had a laptop and a phone, and that was it,” he says. “It was wild, and it was fun, but I never meant for it to be anything other than that one moment.”

Then the calls started coming in from awards-show producers, showrunners and event planners wanting to know how he pulled it off. “It’s crazy to think about now, but everyone was so amazed at this thing called Zoom,” Bergen says. “No one really knew what Zoom was yet.”

Pelosi’s Hold the House brought in $12 million with a Hollywood-heavy lineup that included Whoopi Goldberg, Julia Roberts, Harry Belafonte, Barbra Streisand, Jennifer Lawrence, Rita Moreno, the Chicks and Sia, as well as a reunion of the original Broadway cast of “Rent.”

At one point, Bergen was on a Zoom call with Pelosi, Hold the House executive producer John Legend and Hillary Clinton when the former secretary of state asked him, “Where are you doing this all from?” “I said, ‘My bedroom,’ and I turned the computer around and showed her my bed,” he says.

Ask him what’s next, and Bergen holds up a piece of paper on which he’s written down nine events. He’s also starting a production company for film, television and Broadway. “That’s obviously going to take a minute before that turns into something, but I do love doing this,” he says. “For now, it’s a lot of phone calls saying, ‘I hear you’re the guy. Can you do this?’”