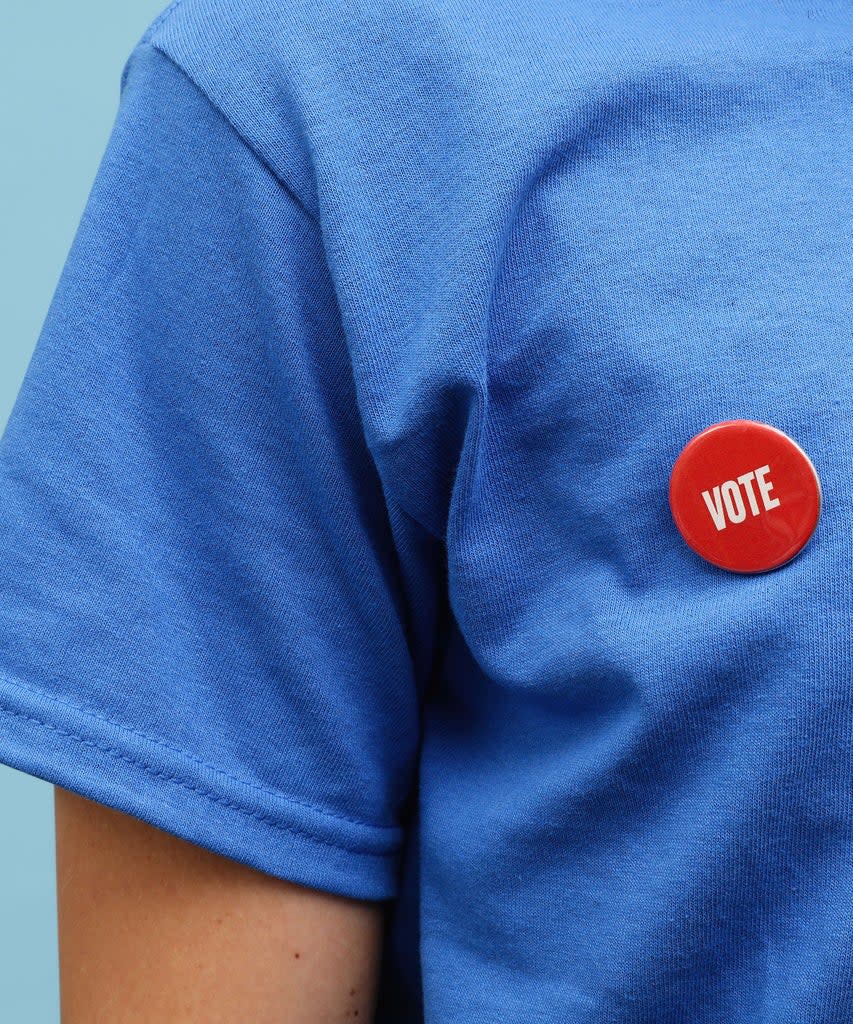 Jamaal Bowman shocked the political establishment by defeating 16-term incumbent Eliot Engel in New York’s 16th Congressional district, which includes the northern Bronx and the souther part of Westchester County. Bowman, a 44-year-old middle school teacher, was the surprising victor among the two, receiving a whopping 56% of the vote to Engel’s 40%. But there was one mighty faction that helped push Bowman over the edge: a campaign called #JewsForJamaal. The initiative was carried out by The Jewish Vote (TJV), a Jewish organization hoping to redefine the narrative around what progressive American Jews want from their political candidates. And, with the momentum of Bowman’s landslide victory behind them, the organization is more prepared than ever to dive into the political sphere.

TJV was the first New York grassroots group to endorse Bowman, doing so back in December 2019. Formed in 2018, it is the electoral arm of Jews For Racial & Economic Justice (JFREJ) — a 30-year-old grassroots organization that has been mobilizing in the most pivotal struggles for justice since its inception. After the 2016 election, JFREJ members began to feel that something more explicit around campaign organizing needed to exist within their membership and community. They were also spurred by the campaign of JFREJ staff member Julia Salazar’s 2018 campaign for State Senate (a race she would go on to win). So, they decided to “to carve out space in the progressive wing of the Democratic party for Jews to organize unapologetically as Jews,” Rachel McCullough, the political director of TJV, told Refinery29.

“We recognized that the establishment of the Jewish community, like the establishment of the Democratic party, was increasingly out of touch with our community and we needed a vehicle with which to fight for [things like] guaranteed Medicare for All, a Green New Deal,” McCullough says. “We needed a Jewish arm of the Justice Democrats to unseat corporate real estate Dems from the legislature in New York and ensure a vibrant home for New York-left Jews to organize.”

On its surface, a group of Jewish voters endorsing Bowman, a non-Jewish candidate, in a race against Engel, a Jewish candidate backed by the Democratic establishment — including the Black Congressional Caucus — might seem surprising. Particularly so, considering Engel labeled himself a progressive, and perhaps there were other races that needed resources more than this long-shot battle. But, according to TJV, a closer look shows that progressive American Jews sought to back a candidate that exceeded just identity and tapped into overall values. “We reject the politics of fear-mongering and treating Jews as single-issue voters, which at this point should be old news, but for some in the establishment, they can’t wrap their minds around it,” says McCullough.

One of those people was Engel. When it came time for TJV to endorse a candidate, they sat down with both Engel and Bowman for a private interview. During the conversation, McCullough says Engel repeatedly brought up Israel, despite never being asked about it, stressing the importance for Jews to stand with Israel. According to McCullough, he did not prioritize other platforms like healthcare, affordable housing, and climate justice.

“We would ask about something else, and he would bring it back to Israel,” she said. “His closing remarks were about Israel and reactionary, right-wing talking points about ‘Palestinian terrorists’ and ‘the Arabs’.” McCullough said that ultimately, Engel’s interests were not aligned with the group and felt too out of touch for younger, progressive Jews to connect with.

For McCullough and the rest of TJV, Bowman’s openness and ability to engage in discourse was refreshing — as were the platforms he wanted to prioritize. “He was so hungry to co-create with us a strategy for the district as a whole that really included Jews as part of the multiracial, cross-class, intergenerational ‘we’ or ‘us,’ who are ready to deliver change,” she said. “He is a very special person and we know a mensch when we see one.”

While the endorsement of Bowman was surprising to some, the organization is making one thing clear: Moving forward is a priority. Jewish voters lean heavily Democratic, with over 70% voting for Hillary Clinton in 2016. Although they are only about 2% of the population, Jewish people invest heavily in supporting political candidates, often disproportionately investing in Democrats. But the left-leaning sector of the Jewish community seeks to expand on the groundwork laid out by establishment Democrats. McCullough says that TJV’s belief is that “Jews writ large also need a home in the progressive wing of the Democratic party,” and if the organization can provide that, they can move some of the energy from establishment candidates to progressive insurgents.

But this idea that Jewish Americans are more than one-issue voters is not new. In the 1980s, during the Reagan administration, New Jewish Agenda was organizing progressive Jews for liberation and social transformation, wrestling with antisemitism, internal community issues around Israel and Palestine, sexism, homophobia, racism, and classism, as Ezra Berkley Nepon outlines in the book Justice, Justice Shall Your Pursue: History of New Jewish Agenda. NJA was a national membership organization active between 1980 and 1992, with the slogan “a Jewish voice among progressives and a progressive voice among Jews.” Like TJV and other progressive Jewish organizers today, NJA pushed multi-issue agendas while working to dismantle oppressive systems both inside and outside of the Jewish community.

Over the last several decades, winning over Jewish voters has often meant having a strong stance on Israel. And while American Jews do still largely support Israel, the issue remains a polarizing one and opinions have been shifting over recent years within the community. For TJV, part of moving forward means focusing on other issues, beyond the scope of support for Israel, that continue to matter and impact Jewish communities in America.

Taking on Engel was not TJV’s first time unseating a Jewish incumbent. Their flagship campaign was in 2018, when the group unseated then-Sen. Jeff Klein — the head of a group of corporate Democrats in the New York State Senate known as the Independent Democratic Conference (IDC). Klein represented the 24th District, which includes Riverdale, where there is a significant Jewish population. TJV endorsed Klein’s challenger, Alessandra Biaggi.

“The Biaggi-Klein race laid the groundwork for what became our strategy in the Bowman campaign, which is to design a field strategy and political and comms strategy to target the universe of progressive Jewish voters in and around Riverdale with a strong emphasis on women,” says McCullough. “For the Biaggi race in participar, we targeted Jewish women over 50 who were newly politicized and activated as part of the [Trump] resistance who discovered their state senator was caucusing with Republicans. Riverdale — and Jewish women in Riverdale — delivered that win for Biaggi, and that’s a large part of the history that led us to 2020 and the decision to go all in on this race.”

In the 16th District, 12% of the population is Jewish ― six times more than it is nationally, which made TJV and #JewsForJamaal’s influence greater than it might have been in other districts. In the Bowman race, TJV’s strategy was never to try to win Riverdale, which is home to over 20,000 Jews and where Engel calls himself “the mayor.” Rather, they wanted to win everywhere else and hope that would be enough. But in the end, they won Riverdale, too. They hoped to pull in 20 to 30% and instead Bowman won 55 to 41% in Riverdale. “Jews played a decisive role in winning the race and that’s something we, and everyone, can plainly see and we are really proud of,” says McCullough.

TJV’s endorsement and campaigning was important from a strictly grassroots organizing level — once IfNotNow, a group of young Jews against the occupation, endorsed Bowman as well, #JewsForJamaal had weekly Monday-night phone-banking sessions of over 100 volunteers who called over 80,000 voters. But it went beyond that, to a strategic level, too. Once TJV endorsed, the group sat down with Bowman and his campaign to give him a crash course in the Israel-Palestine debate, antisemitism, and how to talk about those issues. That support would prove to be crucial in a race where establishment Democrats like the Democratic Majority for Israel would spend large amounts of money running attack ads against Bowman.

“[The campaign was] aware of some of the pitfalls in language when referring to the Jewish community, and stressing they aren’t a one-issue community because you are told by conventional wisdom to look out for this. But to have [someone] on the ground saying ‘yes but’ or ‘yes and’ is really helpful,” Luke Hayes, Bowman’s campaign manager, told Refinery29. Hayes says there is conventional wisdom that “tells you what the race should be about” but then “there are people on the ground,” like TJV, “who can give you a finger on the pulse and cut through the chatter.” And those people are crucial to have on your team.

Any formidable movement needs to have both a political arm and an electoral strategy. And, the founding of TJV, along with INN’s political arm, and Jewish Voice For Peace Action, indicate a rounding out of this strategy of providing a robust space for progressive Jews to organize as Jews. “It’s a really exciting phase to be entering in our work, collectively,” says McCullough. But TJV’s entry-point is local, recognizing that a city like New York can be a center of radical change. They endorsed other progressive candidates who won their primaries, too, including Marcela Mitaynes, Zohran Mamdani, and Jessica González-Rojas for NY State Assembly.

A key strategy for the Jewish left in the next couple of years is to encourage our people to vote in ways that will be good for the world, McCullough says. But given that Jews are only 2% of the population, another goal is move the money that Jewish people spend supporting the establishment of the Democratic party into social movements and into the insurgent progressive wing.

“That’s the prize right now and that, along with our growing disruptive, direct-action movements, movements for revitalizing a lot of our spiritual and cultural traditions and healing and ritual work, and mass Jews of color organizing, are all really important in the ecosystem,” says McCullough. “We are really thrilled that the Jewish left made a play and has been hugely successful in the electoral arena over the last couple of years — that bodes well.”

Like what you see? How about some more R29 goodness, right here?

Primaries Are Your Chance To Make Your Voice Heard

Tag Yourself In This “Trump Vs. Democrat” Poll