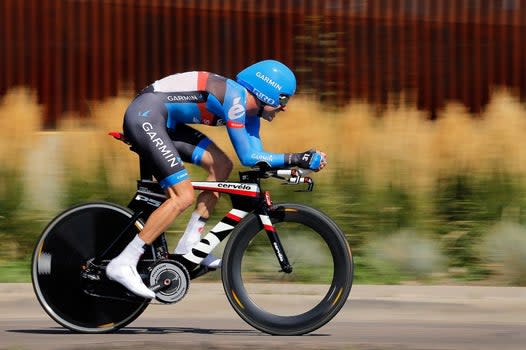 Garmin’s online services have gone down, leaving people unable either to get workouts on or off their devices easily.

Thankfully, there is a workaround that allows people to get routes onto their cycle computer or their workouts back off their watch – even if it is a little more complicated than normal.

The current problems with Connect mean that Garmin’s phone app is unable to connect to the internet, and so is hardly working at all – that, in turn, means that devices, such as smartwatches or bike computers, are not able to connect to the phones. That is the usual way that information is synced onto those devices.

Luckily, the foundations of Garmin’s software were built in a time before widespread Bluetooth and companion devices. That means they can still work as they once always did: by manually loading the files onto or off of the device.

Every course or workout is stored as a traditional file on the Garmin device, which should appear when it is plugged into a PC. Those files can then be pulled off the device and manually uploaded onto almost any major platform, such as Strava or Training Peaks.

Likewise, routes or courses can be created on another platform and then manually added onto the device. They will then be able to load as normal, since the navigation features can be used without any kind of connection to the internet.

To upload a workout, plug your device into the computer, and click into it either through Windows Explorer on a PC or the Finder on a Mac. It should show up as a device called “GARMIN”, in which there will be another file called “Garmin”, and in there should be found the workouts, stored as .fit files and named according to the time and date they were started.

(If you have problems doing that on a Mac, you may find the “Android File Transfer” app useful; installing and using that should let you see the files if they don’t otherwise show.)

You should then be able to grab hold of the relevant .fit file, and copy and paste that onto your computer. That is then ready to upload to whichever service you like: on Strava, for instance, you can click the little “plus” button in the corner of the webpage and click to manually upload an activity.

Websites like Strava should be able to recognise duplicate workouts, meaning that they won’t appear twice when everything is working again and the activity is able to sync normally.

A similar process can easily work the other way, to put courses or workouts onto the device.

First, create the route using a service such as Komoot or RideWithGPS, in the same way as normal. But at the end, those srvices should offer the option to download the route as a GPX or TPX file, both of which work with Garmin’s devices.

Download that file, and plug your Garmin in as before. You should then be able to navigate into the file system and find a foler that could be known as “NewFiles”, or may be called “GPX” – if you drop the file in there, eject the device, and then fire up your Garmin, the route should be there waiting as normal.

The bad news is that it won’t be possible to view stats or other information within the Garmin Connect website or app itself. They too can accept manual uploads of workout files – but since they are offline, there’s no way to do it.

There is also way to sync the non-workout metrics that your Garmin may be collecting while you’re wearing it and not exercising.

The good news is that all of that information – on both workouts and the rest of the time – should still be getting collected by your device and saved there. As such, when Garmin Connect and the rest of its services come back online, they should be able to , as long as there are no lasting problems from the outage.

Garmins still not working, more than a day after outage began