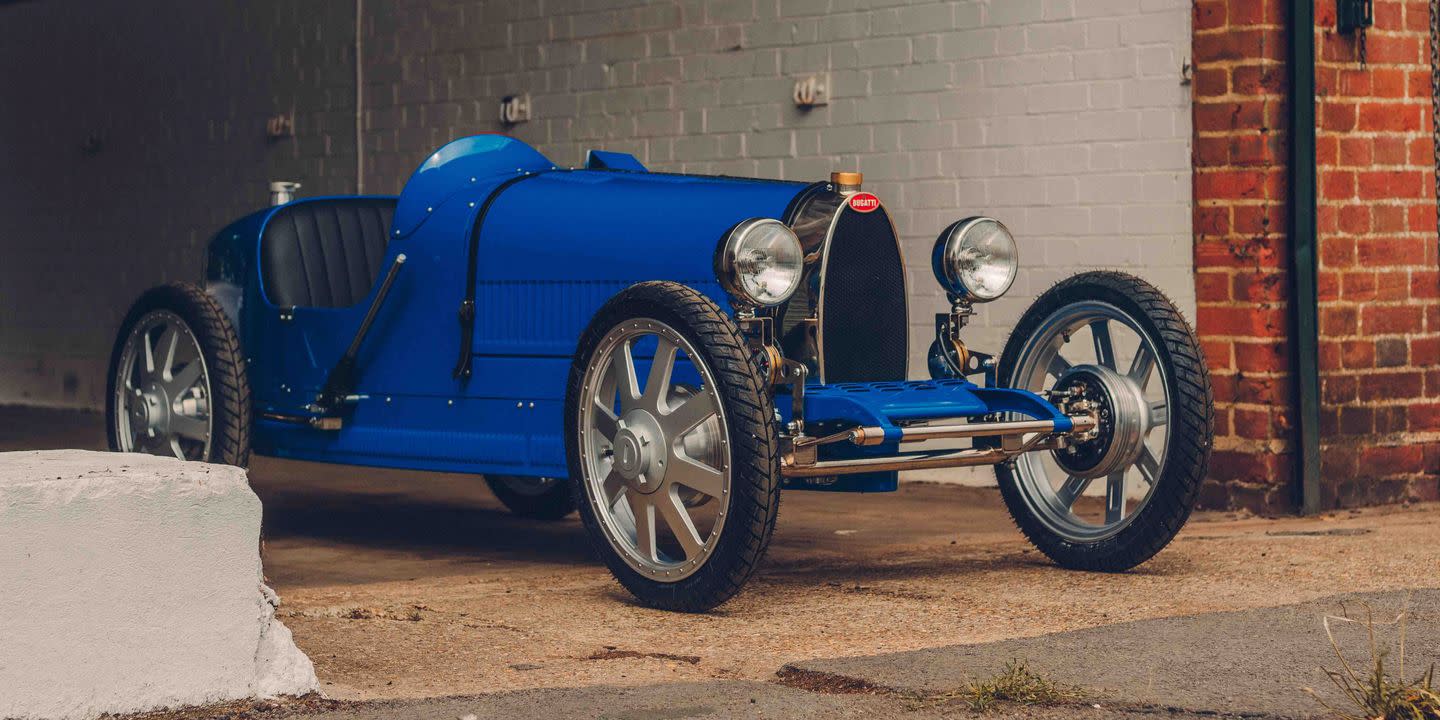 There are two ways to look at the Bugatti Baby II, a 75 percent version of the iconic Type 35 powered by an electric motor: either as a very expensive kids’ toy, or a very cheap Bugatti. For its target audience of those who already own at least one of the brand’s full-size products, we suspect the need to spend the equivalent of $38,000 to $74,500 on one will be only a small issue.

Bugatti has a surprisingly long association with downsized versions of its classic products. In 1926, Ettore Bugatti had a scaled-down Type 35 built for his youngest son’s fourth birthday, and the reaction from customers visiting the company’s Molsheim, France, factory was so positive that it was put into limited production, with around 500 being built. Unsurprisingly, given the net worth of a typical Bugatti owner, these have since become hugely collectible and regularly change hands for serious amounts of money.

At the 2019 Geneva auto show, Bugatti announced that, to celebrate its 110th birthday, it would be building a reimagined version of the original Bugatti Baby, now featuring EV power. Now we’ve got pictures of what the finished version will look like, as well as confirmation of the different versions that will be offered.

At the bottom of the line, the base model—which really is called that, ensuring no self-respecting Bugatti owner will buy it—has a composite body and a 1.4-kWh battery pack. Above that, the Vitesse version gets a brawnier 2.8-kWh battery and a punchier powertrain that includes (as in the Chiron) a “speed key” to unlock its full performance. At the top of the range, the Pur Sang model uses the same mechanical package as the Vitesse but adds hand-formed aluminum bodywork, just like on an original Type 35.

All versions have a limited-slip differential and selectable driving modes, with Novice limiting speed to 12 mph and 1.3 hp of electrical power, and Expert increasing that to 30 mph and 5.4 hp. Vitesse and Pur Sang versions can be put into a faster mode through their speed keys, allowing deployment of a dizzying 13.4 hp and giving a top speed of 42 mph.

They’re unlikely to be street legal in most territories—although it would certainly be fun to try—but Bugatti claims that the smaller battery pack gives a range of up to 15.5 miles on a charge, with the larger one doubling that to 31 miles. Do even Bugatti owners have such extensive grounds to patrol?

Other details include working instruments, including the original fuel pressure gauge which now reports battery percentage and a quick-release version of the brand’s historic four-spoke steering wheel to make access to the cockpit easier. It also gets LED headlights and a Bugatti badge made from 50 grams of solid silver.

Developed in partnership with the Little Car Company in the U.K., the Baby II will be limited to 500 units. And good news for anyone who missed out at the original announcement: Bugatti says that as “some clients have had a change of circumstances due to recent global events,” a limited number of build slots have now become available. Go on, you know you want to.