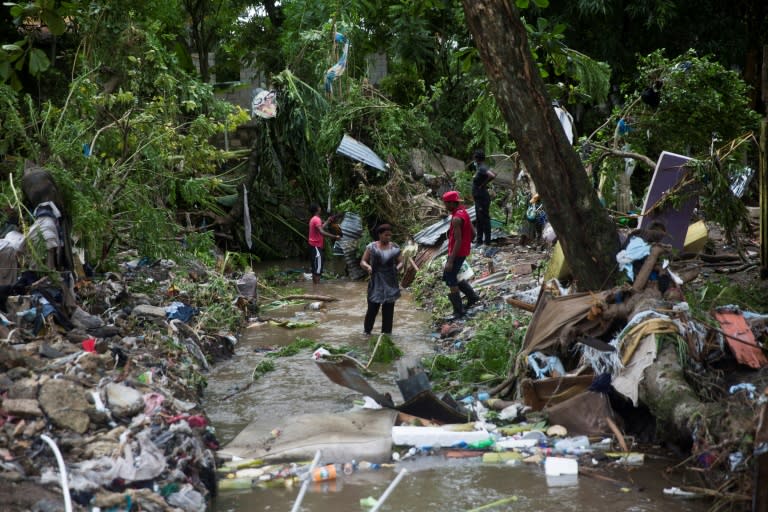 Miami (AFP) – Hurricane Isaias lashed the Bahamas Friday as it churned toward Florida, bringing new dangers to a US state suffering record deaths from an unrelenting coronavirus outbreak.

The category one storm, packing winds of 75 miles (120 kilometers) an hour, gained strength Thursday night after sweeping over the Dominican Republic.

As of 1500 GMT, it was an expansive storm, moving northwest at a speed of 16 mph, kicking up heavy squalls and whipping the southeastern Bahamas and Turks and Caicos island chains with strong winds, the Miami-based National Hurricane Center said.

“Some strengthening is possible today, and Isaias is expected to remain a hurricane for the next few days,” it said.

The eye of the storm was expected to pass over southeastern Bahamas sometime during the day Friday and reach the central Bahamas during the night.

On its current path, it should be in the northwestern Bahamas by Saturday and near Florida on Sunday, the forecasters said.

Hurricane warnings were up across the low-lying Bahamas while parts of Florida’s east coast — including Palm Beach, the location of President Donald Trump’s Mar a Lago resort — were under a hurricane watch.

But a slight shift westward in the storm’s trajectory raised hopes that Florida will be spared a direct hit.

DeSantis said it was too early to open shelters, but urged residents to stock up on enough water, food and medicine to last a week.

Bahamas Prime Minister Hubert Minnis on Thursday relaxed strict stay-at-home orders imposed because of the coronavirus to allow residents to prepare for the hurricane.

“I beg you, do not use this period for hurricane preparation to go socializing and visiting friends or family,” Minnis said at a news conference.

“If you do not need to be out, please, please, STAY AT HOME! We are in the midst of a pandemic and if we do not act responsibly, the consequences could be dire,” he said.

It is the Bahamas’ first hurricane since Dorian, a maximum strength Category 5 storm last year that devastated two islands, pummeling them for three days.

Isaias left a shambles in Puerto Rico, downing trees and electric lines and inundating houses as it cut a path through the island on Thursday.

“If you are seeing this, please, we need help,” a man in Mayaguez, on the island’s western side, begged in a video that showed his family clinging to the roof of their car as rising waters inundated their house.

In Florida, the concern was that if Isaias does hit, it would cause havoc at a time when hospitals are flooded with a surge of COVID-19 cases.

The state’s coronavirus testing centers, meanwhile, were closed Thursday and won’t reopen until they get the all-clear.

The state’s emergency management division explained that the testing centers are housed in tents and could not withstand tropical force winds.

For several weeks, Florida has had nearly 10,000 new coronavirus cases a day.

The Republican-run state is now second in the nation in number of cases at 470,386, surpassing early epicenter New York.

Only California, with almost double Florida’s 21 million population, has had more.