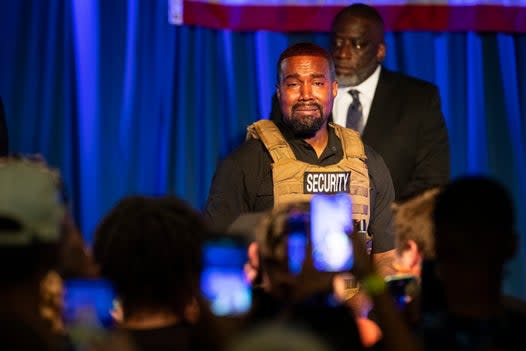 Kanye West broke down in tears while delivering a lengthy monologue on topics including abortion and international trade at his first presidential campaign rally.

The rapper held a surprise event in South Carolina to officially launch his bid for the White House on Sunday.

During his speech, he made a series of controversial comments, speaking at length about abortion and claiming he and then-girlfriend Kim Kardashian considered terminating their first baby, before claiming all new mothers should be given $1 million after giving birth.

Standing on stage in a bulletproof vest, West, 43, spoke without a microphone as he detailed an incident that allegedly took place shortly after Kim called him “screaming and crying” to reveal she was pregnant with their first child.

He told the crowd: “She was crying… and for one month and two months and three months, we talked about her not having this child. She had the pills in her hand.

“I was having the rapper’s lifestyle. I was sitting up in Paris, and I had my leather pants on and I had my laptop up and I got all of my creative ideas.

“ And the screen went black and white and God said, ‘if you f**k with my vision I’m going to f**k with yours’.

“There would have been no Kanye West because my dad was too busy.”

He also ranted against historical civil rights figure Harriet Tubman, saying the Underground Railroad conductor “never actually freed the slaves, she just had them work for other white people”.

Those comments drew shouts of opposition from some in the crowd.

Tubman is one of the most respected figures of 19th century America. An African American who escaped slavery, she helped enslaved black men and women travel north to freedom and fought for the Union during the Civil War. She later became a supporter of women’s suffrage.

Kanye West’s run for presidency: The story so far