Lawmakers question the CEOs of Apple, Google, Facebook, and Amazon 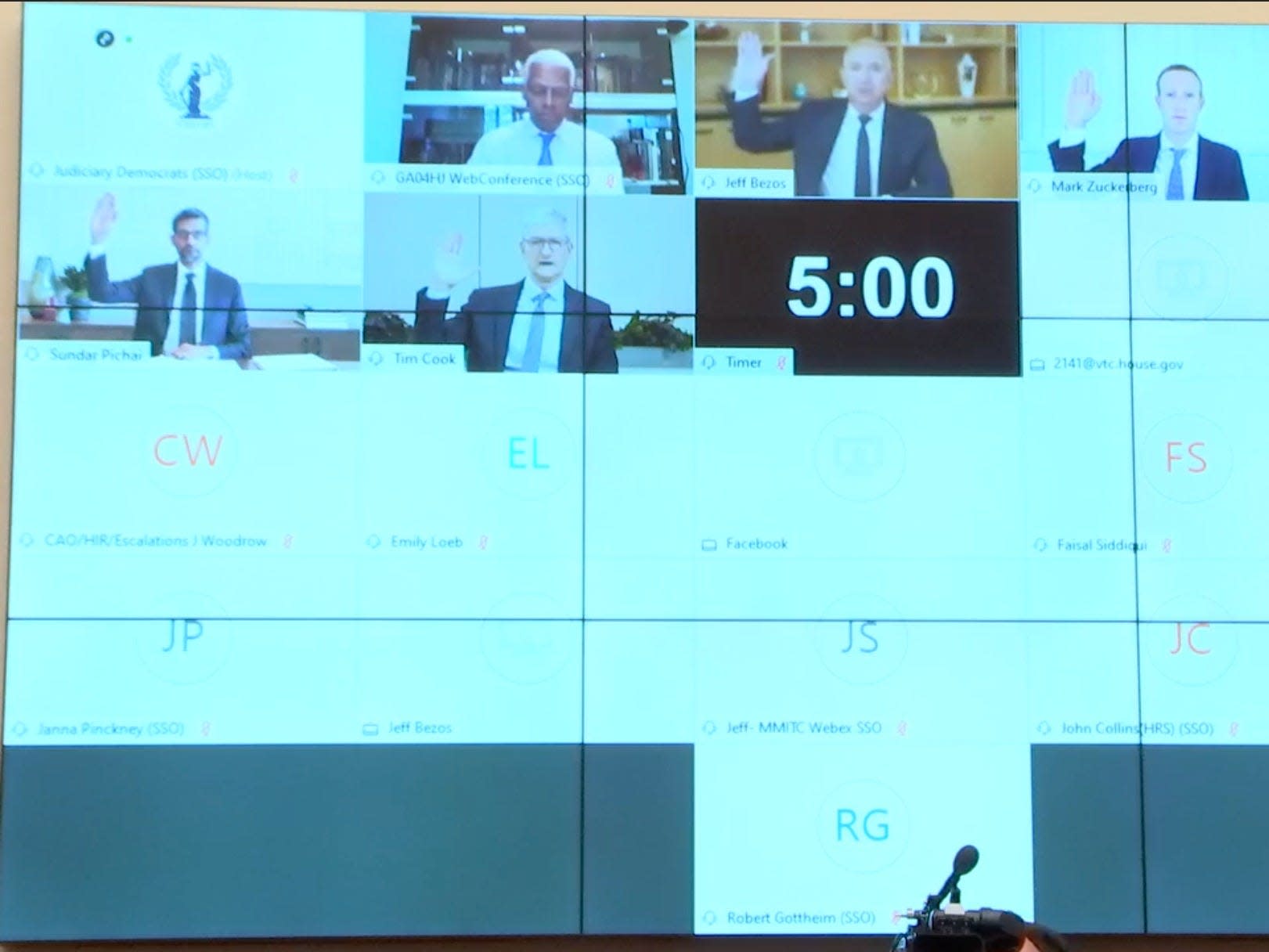 The CEOs of four of the world’s biggest tech companies are testifying before Congress Wednesday to defend their companies’ growing power.

Amazon CEO Jeff Bezos, Apple CEO Tim Cook, Facebook CEO Mark Zuckerberg, and Sundar Pichai of Alphabet, which owns Google and YouTube, will testify as part of an ongoing investigation by the House Judiciary’s Antitrust subcommittee into whether the tech companies used their control of the market to unfairly edge out competitors.

In addition to questions about antitrust, lawmakers are expected to press the CEOs on hot-button issues like the spread of misinformation on their platforms, their treatment of President Donald Trump, and their practices during the COVID-19 pandemic.

Follow along here for live updates during the CEOs’ historic testimony. All times noted are EDT.

3:07 p.m. — Rep. Gregory Steube, a Florida Republican, asked Pichai to explain why emails sent by his campaign were no longer landing in his constituents’ Gmail inboxes, questioning whether it was an effort from Google to target Republicans politicians.

Pichai said Gmail was recently reconfigured with a “tabs” layout that separates personal emails from promotional emails, and that campaign emails would qualify as the latter.

An investigation from The Markup recently found that Gmail does requently send politicians’ emails to spam folders, but that there doesn’t appear to be a partisan split. Rep. Val Demings, a Florida Democrat, said in her questioning following Steube that the same thing happened to her campaign emails to constituents.

Bezos says Amazon has a policy against using the data of sellers on its platform, but that he “can’t guarantee that that policy has never been violated”

2:58 p.m. — Rep. Pramila Jayapal, a Washington Democrat, questioned whether Amazon routinely scrapes data from third party sellers on its platform in order to launch its own products or prioritize other products.

Bezos replied that Amazon has a policy against doing so, but implied it’s possible some Amazon employees have broken the policy before.

“I can’t guarantee you that that policy has never been violated,” Bezos said.

Amazon’s collection of seller data is a sticking point in the antitrust investigation into the company. A Wall Street Journal investigation found that Amazon used seller data to plan its own in-house products. Amazon also said in 2018 that it fired some employees for handing out seller data in exchange for bribes.

2:38 p.m. — Cicilline announced that the hearing would stand in recess for ten minutes to address “technical issues with one of our witnesses.” Zuckerberg’s feed appeared to be glitching shortly before the recess was called.

Bezos, who hasn’t fielded any questions yet, takes a break to eat a snack

2:23 p.m. — Rep. Hank Johnson, a Georgia Democrat, pressed Cook regarding app developers’ perennial complaints that Apple imposes commissions of 15%-30% of revenue made through apps listed on its App Store.

“What’s to keep Apple from increasing its commissions to 50%?” Johnson asked.

Cook objected, responding that doing so would drive app developers to flock to other app stores exclusively, like Google’s Android.

“It’s so competitive I would describe it as a street fight for market share,” Cook said.

2:10 p.m. — Rep. Jerry Nadler, a New York Democrat, made the revelation that Mark Zuckerberg discussed buying Instagram in 2012 emails in the context of neutralizing a competitor. In the emails, published by The Verge while the hearing was underway, Zuckerberg asked Facebook CFO David Ebersman his thoughts about purchasing Instagram. Ebersman reportedly questioned whether Zuckerberg was interested in the acquisitions to either neutralize a competitor or improve Facebook.

In his response, Zuckerberg reportedly said it was a combination of both. He then replied to that email 45 minutes later, according to The Verge, to clarify that “I didn’t mean to imply that we’d be buying them to prevent them from competing with us in any way.”

In response ot Nadler’s questions, Zuckerberg denied that he saw the Instagram acquisition as a means to neutralize a competitor.

Lawmakers start questioning with guns blazing, setting an aggressive tone for the hearing

“We heard throughout this investigation that google has stolen content to build your own business. These are consistent reports,” Cicilline said.

He also brought up Yelp’s allegations that Google threatened to delist the website from search results, and cited recent reports that most Google searches yield Google sites in the top results.

“Most Americans believe that when they enter a search query that what google shows are the most relevant results. But increasingly Google just shows whatever is most profitable for Google,” Cicilline said.

Pichai responded that Google’s search algorithms do not explicitly prioritize the company but aim to show users the most relevant results.

1:50 p.m. — To make his case that Facebook isn’t too dominant online, Zuckerberg listed companies that are beating Facebook in different arenas, including the other companies present in the hearing.

1:49 p.m. — Apple CEO Tim Cook said in his prepared testimony that Apple doesn’t have a dominant market share in any market where it does business, not just for iPhone but for all products. But Apple leads the worldwide market for wearables according to the IDC.

In their opening remarks, the four CEOs frame their companies as unlikely success story and argue that they still face fierce competition

1:45 p.m. — After being sworn in, the four CEOs start their opening statements, all of which acknowledge the size of their companies but assert that they don’t have an unfair advantage in the online market. All four opening statements were published in advance of the hearing.

Bezos and Pichai both emphasized their families’ experiences as immigrants to the US, saying it inspired them to help build their companies.

“I didn’t have much access to a computer growing up in India. So you can imagine my amazement when I arrived in the U.S. for graduate school and saw an entire lab of computers I could use whenever I wanted,” Pichai said.

The opening statements also focus on the platforms the tech giants have built, arguing that smaller startups wouldn’t exist without them. The CEOs of Amazon, Apple, and Google asserted that their retail marketplaces and app stores have created entire new economies for small businesses, while Zuckerberg argues that Facebook’s acquisition of smaller companies has been good for competition.

1:26 p.m. — Before any of the four CEOs were given a chance to speak, Ohio Republican Rep. Jim Jordan used his opening statement to list a series of incidents in which conservatives including Trump were “censored” by tech companies.

Jordan took issue with the fact that Twitter — which is not one of the companies being investigated in today’s hearing — added a warning label to Trump’s tweet that said “when the looting starts, the shooting starts” about George Floyd protesters, but did not apply any such warnings to tweets from Iranian leaders decrying the US.

“You can be the largest state sponsored terrorism … but oh, the President says he’s not going to allow some autonomous zone in DC and he gets censored,” Jordan said.

This will likely be a theme in today’s hearings.

Jordan continued to speak after his allotted time expired. He was cut off by a House official off camera who said, “Put your mask on,” in accordance with House rules that members wear masks when not speaking.

The four CEOs are appearing remotely via videoconference. Here’s what the unorthodox setup like:

1:24 p.m. — The CEOs are calling in using the WebEx video software, a tool that’s less-widely used than competing software from Google, Zoom, or Microsoft.

The hearing just kicked off, with lawmakers framing the inquiry as nonpartisan

1:10 p.m. — Rep. David Cicilline, a Rhode Island Democrat who chairs the Antitrust Subcommittee, begins the hearing with an opening statement saying the antitrust probe “has been bipartisan from the start.”

Cicilline hammered the tech giants for their dominance, calling them “the emperors of the online economy.” He argued that unlike in other sectors, consumers who use the internet are unable to avoid the four major tech companies.

“Simply put, they have too much power. This power staves off new competition, creativity, and innovation,” Cicilline said. “Their dominance is killing the small businesses,” Cicilline said. “When everyday Americans learn how much of their data is being mined, they can’t run away fast enough, but in many cases they don’t have any other options.”

“Being a big business is not inherently bad,” Sensenbrenner said. “Since the tech investigation began we have heard rumblings from many who were quick to say your successful companies are too large … however … I share the concern that market dominance in the digital space is ripe for abuse, especially when it comes to free speech.”

12:43 p.m. — Delays continued to push back the hearing, which is now expected to start closer to 1 p.m. A House Judiciary spokesperson told Politico that the delay leaves time for the hearing room to be cleaned, while Fox News reported that the delay was caused by technical issues.

All four CEOs will appear remotely via videoconference.

While Wednesday’s hearing is purportedly focused on antitrust, Trump has repeatedly accused tech companies of being biased against himself and other conservatives. He already signed an executive order threatening to penalize Twitter after it fact-checked his tweets.

12:13 p.m. — In a tweet, Sen. Bernie Sanders highlighted the wealth of some of the CEOs set to testify Wednesday — including Jeff Bezos of Amazon and Mark Zuckerberg of Facebook — and calling to “break up Big Tech.”

12:00 p.m. — The hearing has been delayed by at least 30 minutes due to a Judiciary Committee immigration hearing running late, Fox News first reported. The hearing is now expected to start at 12:30 p.m. EDT.

11:45 a.m. — All four CEOs published their opening remarks in advance of the hearing, and they provide insight into the broad arguments they plan to deploy before lawmakers today.

Zuckerberg defends Facebook’s acquisitions in his prepared remarks, asserting that WhatsApp and Instagram wouldn’t have survived unless they were acquired. Zuckerberg also frames Facebook’s success as crucial to keeping the US competitive with China.

Pichai and Cook take similar tacks in their defenses of Apple and Google, respectively — both emphasize that their companies face competitors in almost every sector and argue that they have created platforms that enable smaller startups to reach a wider audience.

In Bezos’ prepared remarks, he repeatedly compares Amazon to larger competitors like Walmart while simultaneously arguing that Amazon’s size is necessary to keep the online economy running because “just like the world needs small companies, it also needs large ones.”